Welcome to Dru's Cozy Report: February 2013. This month we have one new series and two returning series for your reading pleasure.


Buried In A Bog by Sheila Connolly is the first book in the new "County Cork" mystery series. Publisher: Berkley Prime Crime, February 2013 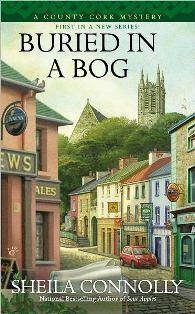 Honoring the wish of her late grandmother, Maura Donovan visits the small Irish village where her Gran was born—though she never expected to get bogged down in a murder mystery. Nor had she planned to take a job in one of the local pubs, but she finds herself excited to get to know the people who knew her Gran.

In the pub, she’s swamped with drink orders as everyone in town gathers to talk about the recent discovery of a nearly one-hundred-year-old body in a nearby bog. When Maura realizes she may know something about the dead man—and that the body’s connected to another, more recent, death—she fears she’s about to become mired in a homicide investigation. After she discovers the death is connected to another from almost a century earlier, Maura has a sinking feeling she may really be getting in over her head.

I was hesitant to read this book only because I like my stories to take place in America, but I have to tell you that I’m so happy I did because this is a fantastic story.

A long buried body suddenly appears as Maura arrives in Ireland. When she discovers a possible clue to his identity, she is later threatened, but that doesn’t deter her from helping the gardai put a name to the body and catching a killer.

The mystery was good as I had to know what happens from chapter to chapter and enjoyed the surprising twists that concluded this wonderfully crafted story. Maura is a great heroine and I was rooting for as she embraces her new surroundings. What I liked best about this story is that Maura didn’t actively pursue being an amateur sleuth, rather the clues came to her in the many conversations she was having with the people in her newly adopted town. The author did a great job of pulling me into this story that boasts a great secondary cast that surrounds Maura, from the village itself, to Mrs. Nolan, from Mick to Rose to everyone she meets along the way. I’m so excited for this series and I can’t wait to read what awaits our Maura in her next adventures. This is a great beginning to what I hope will be a long-running series.

FTC Full Disclosure - The publisher sent me a copy of this book.
Scent To Kill by Chrystle Fiedler is the second book in the "Natural Remedies" mystery series. Publisher: Galley Books, February 2013 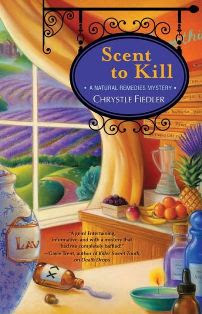 When naturopathic doctor and shop owner Willow McQuade’s ex-boyfriend Simon Lewis invites her to a party for the cast and crew of a new television show at Long Island’s scenic Bixby Estate, she’s most excited to visit the property’s exclusive lavender farm. But a whole field of her favorite stress-reducing herb can’t provide enough soothing support to calm the effects of a murder!

Even the show’s psychic star didn’t predict the demise of Roger Bixby, the estate’s owner and estranged husband of Simon’s new girlfriend. Now Simon, who’s been collared by police, needs Willow’s help to remedy the situation. As Willow snoops about the mansion, offering natural cures to ease the mounting tension, a strange energy—and the discovery of an eerily similar unsolved murder decades earlier—makes her wonder whether the alternative source of the crime might actually be . . . supernatural. Can she find harmony between mind, body, and possibly even spirits before somebody else goes up in smoke?

When her ex asks for her help in clearing his name, Willow and Spade find themselves in a mansion where murder is afoot. When she is warned away from helping, this spurs her on to find the identity of the culprit who would stop at nothing to keep what is theirs.

This is a really good book. I loved the storyline of past and present as I had to know who was behind what and why. I thought I had a handle on the why, but the author’s continual plot twists had me quickly changing my mind and I was a bit surprised when the killer’s identity was revealed because that, I didn’t see coming. I liked that each chapter began with a natural remedy tip and within the pages you also found aromatherapy treatments. This is an enjoyable read that boasts a wonderful supporting cast to Willow and Jackson, good dialogue and a feel-good atmosphere. I look forward to the next book in this pleasantly appealing series.

FTC Full Disclosure - The author sent me an ARC of this book in hopes I would review it. Book will be available February 26, 2013
The Silence Of The Llamas by Anne Canadeo is the fifth book in the "Black Sheep Knitting" mystery series. Publisher: Galley Books, January 2013 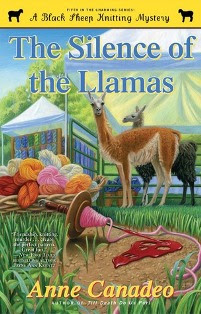 Ellie and Ben Krueger arrived in Plum Harbor eager to live out their dream—tending a herd of gentle, friendly llamas for fun and profit, on a farm just beyond the village. Their grand opening fiber festival kicks off on a bright note but abruptly ends in malicious mayhem. Knitting shop owner Maggie Messina and her friends soon learn that this is not the first time a vicious visitor has called.

The Kruegers suspect that Justin Ridley, their eccentric neighbor, is the troublemaker. A misfit and loner, he’s known to roam the woods all night, though no one knows for sure what he’s hunting. Then there’s Angelica Rossi—the lovely owner of a rival fiber farm—who’s been as busy as a spider, spinning spiteful lies about the Kruegers’ yarns. Or, are the naïve newcomers merely caught in the tangle of Plum Harbor politics, and an intense land protection debate?

Suddenly, vandalism turns to murder—and the Kruegers’ dream descends into a nightmare. The Black Sheep knitters must pull the threads together and uncover this crafty menace . . . before more lives—and more llamas—are lost.

The Black Sheep Knitters learn that their friend, Ellie and her husband’s farm have been plagued with vandalism and when their neighbor is later found dead on their land, the husband becomes the prime suspects and the knitters set out to find the real killer.

This is my first time reading this series and I like it. The author did a good job in presenting a mystery that kept my attention from beginning to end with a couple of surprises that I did not see coming. I mostly enjoyed the camaraderie between the knitters and how they gathered the clues necessary to apprehend a killer. This is a good mystery that boasts a great cast, good conversation and a sense of community. I look forward to reading the next book in this wonderfully crafted series. Bonus knitting projects and recipes are included.

FTC Full Disclosure - The author sent me this book.
And check out these other February releases

I just want to read all those books! Thanks for the recommendations Dru.

You make me want to get all of them. Thanks, DruAnn.

Fun list! More to read! The Silence of the Llamas title totally cracks me up.

New books and authors to check out! Thank you, Dru Ann!