Join Me On A Cross Country Road Trip 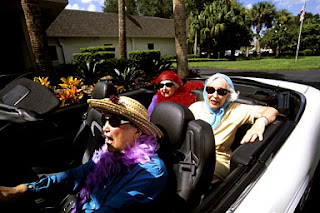 February brings with it some seriously debilitating cabin fever. The weather is cold and gray and fills many of us with despair. Instead of whining, let’s take an imaginary road trip across the country from one end to the other. Pretend it’s any month you really love and fasten your seat belt cuz' we're hitting the road.

Let’s begin in Colonial Boston by exploring the Freedom Trail, walking in the footsteps of our ancestors who fought for our independence. Then on to New York to the Statue of Liberty, the Brooklyn Bridge and shopping in Soho.

After that, we really start to rack up miles, heading for Mill Run, Pa and Fallingwaters, Frank Lloyd Wright’s famous masterpiece. Next the Rock and Roll Hall of Fame in Cleveland.

Hasn't this been a blast so far?
Except now we are all out of the car, consulting maps, debating.

Should we follow the Romantic Road, route 66 through Chicago, St. Louis, Kansas, Oklahoma, Amarillo, Albuquerque, Flagstaff, Santa Monica, and end up in L.A?

Or take the less traveled path?

We go with that and set our GPS for Alliance, Nebraska and Carhedge, where we don’t stay long. This is really more of a guy thing and we left them home:)

In the next few days we view Mt. Rushmore, hike Yellowstone, gush over Old Faithful, visit Jackson Hole, white water raft in the Cascade Mountains, hang out in Portland, before finishing our road trip in the Emerald City. Yes, Seattle is the end of the line.

But wait, we have to get the car back to the other coast.

Take 66 back - so you can visit Amarillo, Chicago, and all the great places in between!

I took the train from Chicago to "San Francisco" (stops across from Frisco actually). I have also been from Phila. to Miami by train and Phila to Boston by train. It is easier than driving. Though I have gone to Boston and Florida by car from Mansfield, PA.

However, if you're driving back go south through San Francisco, Los Angeles, and of course Disneyland, to the Grand Canyon, and east.

This sounds like fun! You get to see a lot of beautiful country side. Of course, you can drive through my country from top to bottom in 5 or 6 hours :)

I'm following all of your suggestions. See you in September!