I don’t swear much. I used to—back before I had kids and didn’t really have to set an example for anyone. But as my kids grew up, I grew out of the habit of swearing.

That’s not to say one doesn’t slip out a time or two...some instances just call for it. Especially when I’m driving—enough said (but never in front of the kids, even though they’re all practically grown). 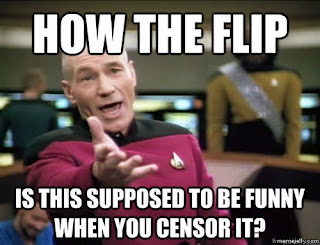 This is also not to say that life doesn’t hand us many things to curse about. It does. From stubbing a toe to dropping a plate to getting the shaft...sometimes I just want to cuss aloud a blue streak.

I don’t. But lots of times I’ll use another word, a substitute of sorts. You know the kind (oh, fudge!). Me? I have two fallbacks. One comes from Spongebob Squarepants (don’t judge). It’s simply barnacles.

The other...well, quite a few years back Mr. W and I were watching a movie on TV that had originally been in theaters. Instead of muting the curse words, creative substitutes were made. For this film, the mother of all swears was changed to Melon Farmer. So yes, whenever the situation calls for it, we use melon farmer. It comes in handy—and usually makes us laugh, too.

Do you have any creative substitutes for swears?
Posted by Heather Blake Webber at 12:30 AM

O yes, there was this cute tv series a long time ago, and the crabby old neighbour/landlord used: gloeiende, gloeiende, meaning something like glowing. I have no idea how to translate it that it makes sense.

LOLOLOL. Criminey is a favorite, but I must admit that my language can be colorful. For a few years I was both bartending and working in a middle/high school library. My language was clothing oriented. I couldn't use 4 letter words in dress clothes and I couldn't use most multi-syllabic words in jeans.

I swear....much more than I would like.
But I think I am going to start using Melon Farmer because it did make me laugh.

I'm guilty of using "colorful' language. Nothing that abuses the name of our Lord and no f-bombs, but anything else might be fair game.

@ Aurian: possibly "blazing, blazing!" would work, by analogy with the English "Go to blazes!", a euphemism for "Go to hell!"

Some forty years ago or more, I saw a show on Dutch television where someone was interviewing a man who was heading a movement against swearing. After all, he argued, swear words were simply words, and any word would do as well -- so why use offensive words? Why, if you hit your thumb with a hammer, not yell "Oh, rhododendron!"?

Needless to say, "Oh, rhododendron!" doesn't have quite the same force as, well, some other words I could mention (but shan't), but, even after all these years, I find myself still occasionally saying it, and laughing.

If the situation is serious enough, under pressure I'll use whatever words I need to. It's not as though I will take the time to calm down and choose something less offensive. In milder situations, "Oh, bother!", "Crikey!", and (in disgust and irritation) "Oh [name of the Christian "saviour"] in a handbasket!"--Mario R.

My mother is from the South and taught all of my sisters and me that a "lady" doesn't curse. (That is just one of the rules to be a "lady" and there are a lot of them believe me.) Even though I'm well into adulthood, I still don't curse. Maybe because it was drilled into me, I'm not sure. But there have been those occasions when I wish I did. :o) I like your use of barnacles and melon farmer just cracked me up. Sometimes I say "oh swear words" instead of actually saying swear words.

When I was teaching, and the students used that word beginning with an "f," I told them to say "fire truck." It begins and ends with the same letters. It worked.

I love all these substitutes! I think I'll be adding them to my vocabulary.

And thanks to Mario for the answering Aurian--I had no idea with that one. Blazes makes sense.

My husband and I use bull shoes and like using names of places like Hoover Dam, Rotterdam even Austin Dam which gives us a word that is not actually swearing.

I'm a huge fan of the band Mumford and Sons. The lead singer occasionally drops the f-bomb in a few of his songs. I'm not usually a lover of this particular curse word but I can forgive him because he says it with his gorgeous English accent! I was listening to their cd a while back and something happened that totally called for a curse word or two. What came out of my mouth at the time was "what the Mumford?" I laughed so hard that it stuck and is now my go-to curse.