What is an Inspirational Cozy?
By AmandaFlower 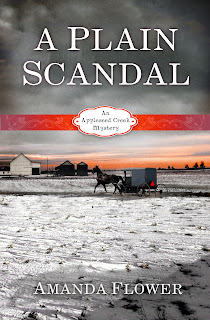 When I wrote the original proposal for my Appleseed Creek Mystery Series, I had two versions: one tailored for the general market and one tailored to the Christian fiction market. My agent sent it out to both, and I was offered contracts from publishers from both markets. Appleseed Creek finally ended up with the Christian publishing house, B&H Publishing, and I accepted a second contract to write Amish Quilt Shop Mysteries for NAL/Penguin, which I write as Isabella Alan. Both are Amish cozy series set in Ohio.

So how are the Amish cozies I write for the inspirational market different than those I write for the general market? The differences are subtle, and this is how I distinguish between my two cozy series. Other authors may distinguish them in another way.

How are they different?

Faith is a central element. In my Appleseed Creek Series, two of my central characters, Becky Troyer and her brother Timothy Troyer, leave the Amish because of disagreements with some of the Amish beliefs. This leads to conflict with their Amish families and districts. I don’t go that deep into Amish doctrine in the books I write as Isabella Alan.

In Appleseed Creek, my non-Amish main character, Chloe Humphrey has a darker past than Angie Braddock from my Amish Quilt Shop Series does. 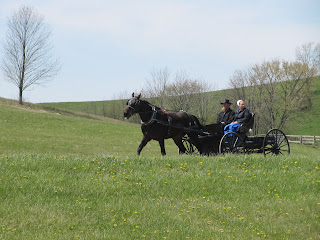 The romance is more in the forefront of the story in Appleseed Creek. This is because computer geek Chloe Humphrey is romantically involved with Timothy Troyer. His Amish family and district do not approve because they want him to return to the Amish faith.

In Appleseed Creek, I tone down the sarcasm a tad… not all the way because Christians can be very sarcastic too. I’m proof of that.

How are they alike?

The mystery drives the plot.

Quirky characters abound. The zanier the better. Amish can be quirky too!

Animals are among the supporting cast. I have the most adorable French bulldog named Oliver in my Amish Quilt Shop Series.

You can still recognize my voice as an author. I can’t change who I am as a writer. My voice retains a quirky, humorous sound.

No matter the likes or differences, writing for both markets is a dream come true for me. It’s what I always wanted to do. However, the best part is the feedback from readers. So many Amish Fiction readers have told me they’ve never read mysteries before and now are reading them because of my Appleseed Creek Series. In my opinion, anything that brings readers to cozies is a good thing.

Amanda Flower started her writing career in elementary school when she read a story she wrote to her sixth grade class and had the class in stitches with her description of being stuck on the top of a Ferris wheel. She knew at that moment she’d found her calling of making people laugh with her words. Her debut mystery, Maid ofMurder, was an Agatha Award Nominee for Best First Novel. Amanda is an academic librarian for a small college near Cleveland. She also writes mysteries as Isabella Alan. The first Isabella Alan novel, Murder, Plain and Simple releases September 2013. In 2014, she will debut a middle grade mysteries series published by Zondervan/HarperCollins.

The Cozy Chicks want to thank Amanda for blogging with us today. To be included in a random drawing for a signed bookplate as well as a copy of A Plain Scandal, leave a comment below and make sure we can contact you should your name be drawn!

Wanda E. Brunstetter is a favorite with my sister, who shares the books with me. Now a new author to share. Thanks for the giveaway.

Oh wow! Both series sound like a lot of fun. thanks for the fence to win!

Thanks for the interview ladies, very enlightening. I do have some Amish books by Annette Blair, and Laura Bickle - The Hallowed ones, but still have to read them.
I do read the Pennsylvania Dutch mysteries by Tamar Myers.

I've never tried either series, but look forward to trying both now that they've been brought to my attention. They both sound great and I'm eager to dive into them! I'd love to get a free book or two to help with that. Thanks!

I liked that you compared the two Amish series. Looking forward to reading the Isabella series.

I love Amish books , their way of life seems so honest and simple. I love the idea of combining mystery and the amish esp if you throw in some quirky characters. Whats not to love !! :0)

It was interesting to read about the differences. To be honest, I rarely read 'Christian' fiction because it is often not well written. One exception would be Patricia Sprinkle's books. They are great mysteries and while it is obvious the characters are Christian and have great faith, it is not a preachy book.. I look forward to giving these new books a try.
Chooper526@gmail.com

Amish lifestyle just holds a special fascination for many. I've read one piece of Amish fiction before and really enjoyed it. I look forward to checking out both of these series.

I lived in Lancaster Co., PA, for many years and really admire the Amish culture, I would love to have the book!

My 92-year-old mother really likes to read cozies, and she has become especially drawn to Amish ones. I would love to win one to give to her! (I'm sure I will enjoy reading them too!)

I'm intrigued by the Amish, and I love cozy mysteries. Sounds like a wonderful story.

I am a fan of Amanda's and have the first book in this series. I would love to win the second one. Thank you for the chance.

Thoroughly enjoyed "A Plain Murder" and have "A Plain Scandal" on my to read list, as well as your new series. Whether I win a copy or not, I'll still be picking one up ;)

Amish cozies are so interesting as there is always something new to be learned!

I love this combination! I'm a fan of cozies and inspirational books. Especially modern day one. Loved the first book in this series and look forward to reading the newest. Thanks Amanda!

Both of these titles sound really interesting..I am so excited...Will be reading both, win or lose..

I haven't read either author but I am so excited to read them! Thanks for the chance to win, and I enjoy your blog very much!

Sounds like a good read - have to try out both! Thanks for the chance to win!

I love christian fiction re: the Amish. Would really like to win this book.

Sounds loike a very interesting read -- a little twist to the ordinary. Would love to have this book. Please accept my entry. Thank you.

Love reading books about the Amish.
Thanks Amamda for give away.
Carolyn Jefferson
carolynj63@att.net

thank you for this giveaway!!!
sounds like an interesting read!!!

I live relatively close to several Amish communities, in fact I took pictures of an Amish families house and gardens...and animals so that they could send them to friends and family out of state. I also enjoy reading about the Amish. I'm generally not one for "inspirational" books; I've found them preachy and oftentimes poorly written as well, but I'd certainly like to try your Appleseed Creek Mysteries! Thanks for a chance to win! Katreader (at) hotmail (dot) com.

I've never read any Christian fiction because I thought it would be very heavy into preachy things---but yours sound more like they would be just nice "clean" literature which I would find refreshing.
suefarrell.farrell@gmail.com

I would love to win I enjoy all the amish books I have read up now and I have some new authors to look into thank you for this chance to win Karen khsmith97217@yahoo.com

I am a fan of Amanda's and would love a copy of, A Plain Scandal.

I love the Appleseed Creek Series, now I will have to have the Amish Quilt series so many books on my tbr list.

I can't wait to read these 2 series. Like Panela said so many books to be read.

Both series sound like books that would hold my interest. Thank you for the giveaway.

Amanda, I love hearing about all the books on the horizon--huge congratulations!

Btw, you had me fooled with the murderer of the 1st Appleseed Creek book. I totally thought it was...well, I won't ruin the story for anyone. ;)

I love Amish Mysteriesand other books about the Amish, fiction or nonfiction, and can't wait to read any of your new books. blkrose49@hotmail.com

I'm enjoying reading everyone's comments! Thank you all for entering the giveaway!

Love reading Amish fiction and mysteries. Would love to win and read Amanda Flower's book. Thank for the chance to win.

Toni I would love to start reading these mysteries. I have recently become more interested in the Amish lifestyle and always enjoy finding a new author!

Since I live in PA it is easy to visit Amish in Lancaster County. I know about Bundling and Bundling boards used by the Amish even though it seems not everyone has heard or read about the custom.

I did not leave my email - I use rblerner@ptd.net as primary.

I'm looking forward to reading this series. Amish fiction and Christian cozy mysteries are my two favorite genres. It's wonderful when they're combined into one book. I've loved getting to know Amanda better and I thank you both. Blessings, Susan Fryman susanngarrylee@yahoo.com

I will be looking for both series!

Amanda is a new author to me. Would love to win this book. Thank you for the opportunity.

I love Amanda Flower's books! I was lucky to receive an advanced reader copy of A Plain Scandal via Ms. Flower. I can't wait to read the Isabella Allen series too!

enjoyed a plain death, like to have a plain scandal, thanks :)

I am looking forward to reading this, it would be really nice if I'd win it. Thank you for the chance.

I am really excited for A Plain Scandal. I like that Amanda is a librarian (like me) and a great author as well. Good luck to you Amanda!

I really enjoyed A Plain Death and have been looking forward to this one for a couple months! Wishing continued success to Amanda! Thanks!
JHolden955(at)gmail(dot)com

This looks like a great author to try. Thanks!
scri200@gmail.com

"A Plain Scandal" sounds like a great inspirational cozy! Thanks for an informative blog post and for the giveaway. Good luck to all who enter!

I REALLY enjoyed her books! Am absolutely thrilled that a new one is coming out! Can't wait to read it-wish I had it now!Thanks Cozy CHicks , I luv your books,too!

I like reading anything Amish. Non-fiction, fiction and mysteries. I'm always on the lookout for Amish books at the bookstores and library. Have Amanda's book on my wish list. Thank you for the giveaway.
msbookwormlady(at)aol(dot)com

I don't have any books of Amanda's but I've heard about her books, would live to win
maggieh1947@att.net