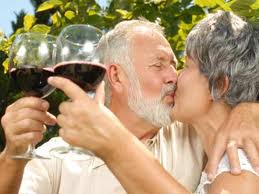 Those of you who have been following my career from the beginning, or have recently discovered sixty-six year old Gertie Johnson, know that I love writing about aging characters. Unfortunately, while the past is firmly populated with protagonists of a ‘mature’ age, the current trend in publishing has paid homage to a much younger set. They want ‘em young.

Or did. Until now.

Enter a new exciting genre - Coming of Old Age (and for a certain generation there's also Boomer Lit). Mike Befeler coined the phrase Geezer Lit way back when it wasn’t fashionable. He had a vision, and he wasn’t afraid to take the risk. Mike’s fourth in his wonderful series called Cruising in Your Eighties is Murder, featuring a hero who struggles with short-term memory loss, came out today. My kind of guy. Mike’s vision of the future was spot-on.

Suddenly, romance and mystery, growth and change, isn’t only for the young. Those of us in our fifties and beyond want to strut our stuff, too. We want satisfying relationships. Some of us have to deal with all the complexities of our long-term relationships – grown up children, grandchildren, our aging parents, spouses we’ve been with forever.  Some of us are in the process of beginning anew.

Older protagonists have many advantages over their younger counterparts. They are immune to peer pressure. They march to a different drummer, one far more interesting and experienced. And they aren’t afraid to take chances.

Yes, we have a whole lot to offer in the third act.

Hear, hear! I hadn't heard the term Boomer Lit or Geezer Lit, but I'm excited to learn of it. Thanks for posting this for those of us of a 'certain age'.

I'm a new grandma in my late 50s, and my DH is in his early 70s. I'll tell him about the Geezer Lit protagonist with short term memory loss: he'll love that!

I am really happy about the change in mindsets. I just turned 60 - although that just doesn't seem possible. In my mind, I'm still in my 30's and in my heart I'm still a kid.

I have my favorite authors that I would read no matter how old the characters are (i.e. Heather Webber, Leann Sweeney, Ellery Adams, Lorna Barrett, Julie Garwood, and many more) but I do so enjoy reading about characters over 50 who are able to have some romance in their lives. Let's be real here...most of us are young in our hearts and minds - even if our outer self is getting older. We still want the same things - to love and be loved, to have adventures, etc. Unfortunately, in reality, sometimes the adventure part can become a bit harder as we get older, so it is even more satisfying to read about others who are able to get out there and have fun, find romance, and maybe get into a little trouble along with way.

So, thanks for giving us Gertie...

Lol. I really like this, all those YA books, and New Adult books, I do like to read about "older" heroines.