From the number of posts from Facebook friends, many of you are suffering from a not-so-nice cold and flu season. My husband came down with a cold the minute we got off the airplane coming back from Christmas in Seattle. I pumped him with herbs and vitamins all to no avail. He was sick for nearly two weeks. Then it was my turn. Have to take turns, right? 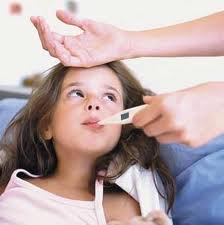 When I was a school nurse, I used to dread coming back from the Christmas break. Every other kid was sick and the others had already been sick. I always sent out a note to parents at the beginning of the school year that sick children would be sent home and that they should not return until they were free of fever for 24 hours. Well along came advil and motrin. A dose before school, and guess what? Free of fever. Until about lunch time when the medicine wore off. Didn't mean these kids weren't coughing and sneezing and downright miserable. But their parents had to go to work, right?

I understood the dilemma. Lots of vacation time was taken during the holidays. They HAD to go to work. Or that was the reasoning. And in low income schools like the one I worked in, parents were often not allowed to leave their fast food joint place of business for something as silly as a sick child. I often kept feverish, coughing, vomiting children for hours while their parents scrambled to find someone to pick up their sick child. Some parents just ignored me, though. Yup. Bus drivers don't like taking home children with 103 temperatures, but that's sometimes what happened.

I honed my detective skills working that job. By the time I retired I could track down a parent (brothers and sisters of sick child are often quite helpful) within an hour and had no problem talking to the bosses who decided the parents "couldn't" leave work. Oh yes they could. And we would even send someone to come and get said parent if they claimed not to have transportation.

One time, during a particularly bad flu season like the one we are having now, one of my disabled children became very ill, very quickly. I called her mother, who said she was coming, and then held that poor baby in my arms for the next 3 hours. By the time her mother finally showed up, the child's temperature was 106. (Nurses cannot give any medicine that doesn't come from the parent with a note and directions.) She was back in school 3 days later. (Probably after getting her morning dose of motrin.) 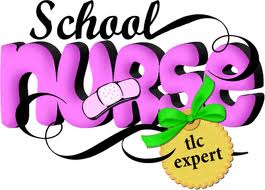 If you are reading this and are young enough to have school-age children, don't forget the nurse when you are handing out thank-yous. That is, if their job hasn't been eliminated because of budget cuts.

What about you? Flu? Cold? Or lucky enough to be healthy? 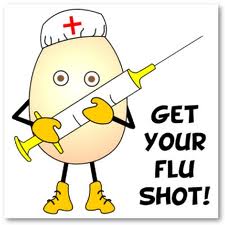 I got sick on the evening of December 31st, very bad flu. I have recovered enough to go back to work last monday, but I still have breathing and throat problems. Perhaps it is trying to come back to get me. Of course, my boyfriend was sick with Christmas first, so he gave it to me, but it seems I have given somethign back to him again as well. The throat problem, the coughing.

But I don't think I have ever been to a school with a school nurse or something like that. If you were ill, the concierge would send you home and you could just climb your bicycle.

Unfortunately, I can't get a flu shot. When asked if I have any allergies, I tell them I've been diagnosed as allergic to eggs and then the shot isn't allowed. It seems that the medium used for the vaccine is eggs.

This is one of the times I'm really glad that my workstation is away from the rest of the office - I'm not sitting next to someone who's got the bug and it's in the contagious stages.

Whalehugger, I am allergic to eggs, too--and chicken and feathers, so no flu shot for me either. But if you're not allergic, a flu shot really is worth getting. I used to set up a flu shot clinic every fall for the teachers and got as many of them as possible to get the flu shot. It kept a lot of them well since they do hug a lot of human petri dishes throughout their work day! :-)

We have not gotten the flu shot the last two years. We succumbed after the fear factor of H1N1 but aren't convinced it is a 100% guarantee you won' t get it or that it helps.

Instead i strongly follow the fever free for 24 hours thing. I don't care what my work says and I have two part time jobs with no personal time. My husband and I switch off. Just this week my son stayed home an exra two days just to be safe. I want HIM to feel good and be safe and everyone else.

Kudos to you for being a good nurse. And this mom would have been at your school in like 5 minutes if my son had that high of fever!

Both my kiddos got the flu mist this year, I don't remember getting it. Though I probably should. I definitely keep my oldest home from school if necessary. Luckily my oldest never missed a day of school last year (never got the flu) and has only missed one this year right before winter break.
Krista

Since I so rarely get a cold, it is sure a pain having this cold for the last week. I have been getting a lot of reading done.