Welcome to Dru's Cozy Report. Today’s read are not "exactly" cozies, but recent mysteries that I had the pleasure of reading. 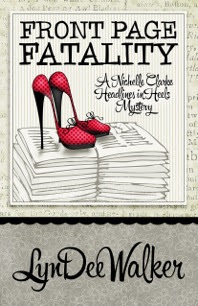 Crime reporter Nichelle Clarke's days can flip from macabre to comical with a beep of her police scanner. Then an ordinary accident story turns extraordinary when evidence goes missing, a prosecutor vanishes, and a sexy Mafia boss shows up with the headline tip of a lifetime. As Nichelle gets closer to the truth, her story gets more dangerous. Armed with a notebook, a hunch, and her favorite stilettos, Nichelle races to splash these shady dealings across the front page before this deadline becomes her last.

This is a good start to an exciting new series featuring Nichelle Clarke who is a gutsy news reporter whose simple investigation turns into a risky exposé that saw our heroine tackle the police, a mobster and a competitive co-worker. I love the concept of this well-written mystery that pulled me in immediately and kept me guessing as this captivating drama came to its explosive conclusion. Led by a believable cast of characters that was diverse in their role where everyone was suspect, this was an enjoyable read and I can’t wait for the next book in this appealing series.

FTC Full Disclosure - The publisher sent me an ARC of this book in hopes I would review it. Book will be available January 29.
Grounds to Kill by Wendy Roberts is the first book in the new "Barista" mystery series. Publisher: Carina Press, January 2013 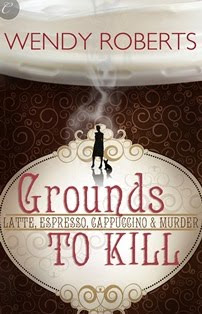 Barista Jen Hamby's coworkers give her a hard time for bringing coffee and pastries to a homeless man who sits outside her café--but she has a secret. The scruffy man is her father. She's also hiding the little matter of why her palm itches. But how can she explain that her hand has a mind of its own and writes messages from the beyond? Right. That'll get her Employee of the Month.

When she finds herself scrawling your boyfriend is cheating on you! to herself on the bathroom mirror, she immediately dumps the guy. But then his little fling--who just happens to be her half sister--turns up dead, and suddenly Jen's homeless father is the prime suspect. Jen knows he is being framed and must take matters into her own hands to protect him. But will anyone believe that the crazy old man is innocent? Or that his spirit-writing daughter holds the truth?

What an exciting debut! Jen has a secret that comes in handy when she stumbles upon the dead body of her half-sister. When the police start looking at her father for the murder, Jen with help from her two BFFs, set the stage for finding a killer and what a fun read this became. This was a good mystery that I could not put down as I had to know what happens next and who was trying to stop Jen’s effort in proving her father’s innocence. This was an action filled drama that never let up even when I thought I had a handle on the killer’s identity. A good read boasted by a likable cast and great dialogue, I can’t wait to read the next book in this enjoyable series.

FTC Full Disclosure - I bought my copy of Grounds To Kill.
And check out these other January releases (click on the covers for more information).

Wow - these both sound wonderful! I'll have to add them to my wishlist! Thanks, Dru.

FRONT PAGE FATALITY is such a great book, I could not put it down. I couldn't agree more with your review, "...pulled me in immediately and kept me guessing..." This is a page-turner for sure. Great review!!

Dru, thanks so much for the fabulous review! I'm absolutely THRILLED you enjoyed Grounds to Kill!! :D

Dru Ann, thanks so much! I couldn't be more thrilled that you enjoyed hanging out with Nichelle! And Julie, thank you, too, doll!

Ohhh, both series sound fantastic! Thanks for sharing! AND thanks for sharing the other January releases. Don't know how Bailey Cates' new release fell from my radar. I really enjoyed the first in her Magical Bakery series, Brownies and Broomsticks.

I can't wait to read FRONT PAGE FATALITY! I've heard such great things, including your hint of an "explosive conclusion" that promises I'll be satisfied. Thanks for sharing, Dru!

Thanks for the great selections to read this month! Always look forward to your post in the rotation.

Sorry to be reading this so late. I'm late around the internet for everything this month. These two sound like good reads! I hope I get a chance to read either one, but for now will definitely be adding them to my TBR list.