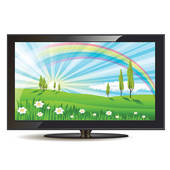 Comcast is on my bad list. Again. They shut off my TV service while I was away after Christmas, and when I called to find out what was going on, I was told I hadn't paid my bill.

Impossible, I told the man on the other end of the line. My bills are on auto pay.

He argued that he was reading straight from my account. He went on to say that my service had been shut off since November of 2011. How could that be? I asked. I've been watching TV!

He would not believe me. Seriously.

I finally said, "Whatever. I need to get it turned back on. What do I do?"

He transferred me to someone else because he said he couldn't help me. So what had he actually accomplished? Nothing.

The next person asked me all over again what the problem was, and when I gave my name, phone number, and explained the problem, he told me my service had been shut off since August of 2011. After trying to convince him that he was wrong and finally stating that I didn't really care what he thought, he transferred me.

The third person asked what the problem was, and once again I had to give my name, phone number, and explain my situation, which was basically how to get the damn TV turned back on.  This guy couldn't understand why my service had been shut off since I had a CREDIT of $244.

He transferred me, too.

It wasn't until I hit a fifth person, a woman, that I finally struck gold. She verified that I had a credit, pushed a button, and my TV was on.

Seriously? This is how a national company is run?

I'm furious, and I hope Comcast knows it.  They suck! I wrote a rant on their Facebook page but haven't heard anything back.

Have you suffered at Comcast's hands too? Have you had any luck dealing with them?

Comcrap is all but useless. The only problem is, here they have a monopoly on cable service, which also means a monopoly on high speed internet service. So we're stuck. My husband has been round and round with them several times on different technical aspects. On another level, the store I work at takes utility payments for different companies, among them Comcast. We keep getting Comcast customers coming back in who have had their service shut off even after they paid their bills, because Comcast refused to credit them because they used our service to pay. We're an authorized payment center...unless you ask the wrong customer service rep. The ONLY thing we use them for is internet service - I refuse to use them for anything else and would love another alternative for internet.

Thank goodness I don't have them-I have Time Warner Cable. It has plenty of faults-but generally good customer service that can fix your problems, usually, without too much of a hassle.

I've heard that Direct TV has issues too. One friend said she paid her bill, in person, and they credited it to the wrong account and then actually lost the payment (that is don't know where it went). They wanted my friend to issue yet another check to pay her bill!
We have Knology here and recently (as of January 1) they took 3 additional channels off their line up but are charging us more!

I've had DirecTV for five years, and they're fantastic! They have excellent customer service, though I haven't had to utilize it much because their service is so reliable.

I refuse to use Comcast for political reasons (they used politics to get a monopoly on cable services in Philly for years, so I use satellite). But my mom in MO has it. When I was home last month, this is what happened - she and her husband got a letter saying the check they used to pay their bill was returned. Impossible since they have WAY more in their account than what monthly cable costs.

After a call to the bank and to Comcast, it turned out that what happened is that Mom's husband paid IN PERSON and on time, but the woman had incorrectly processed the electronic payment.

For that, Mom and her husband got charged a $30 late fee and now it looks like they can't pay bills on time. Mom made them put a notation on the record that it was the Comcast person's fault that they were "late" in paying AND reverse the late fee.

Ridiculous when you go in person to pay and STILL can't get your bill paid!

I have DirecTV (have for several years), and I can honestly say I have never had a problem with them. Super awesome.

I like the Comcrap name above. Awesome. I hate Comcast. I would go without cable before I would use them again. I had the same problem with billing. I would pay and they would say I was behind a month. When I would call I couldn't even get my local company in Tennessee, I would get Atlanta, who would say I would have to contact my local Comcast. I would call my local number and guess what? I would get Atlanta! So, I would have to drive all the way over to their office, waste gas, to get transferrred in person to three or four different people. I was furious! They actually have an armed guard at the front door. No wonder! Anyway, I cancelled my service, I kept getting a bill for the supposed non paid bill. I even finally got a man that couldn't understand why I had even received an upaid bill notice. I threatened a lawsuit if I got another letter. Terrible customer service.

I have Verizon FIOS and while there are minor issues of constant updates to the system, otherwise (cross my fingers) no problems. We switched away from COMCAST as soon as FIOS was available. All we ever had with COMCAST was problems.

My mom switched to Directv about 5 years ago because a tree limb snapped out cable line. I called Comcast and asked them about sending someone out to re hang the line. OMG the girl said that she could resend the signal and that should work. I explained to her again that the line was on the ground so that wouldn't help. She insisted that this would work even if the line was snapped and laying on the ground. When I finally got her to understand, I got transferred and was told that it would at least two weeks before anybody could come out and repair the line. Their customer service is HORRIBLE!!!!!!

I'm sorry to say that it's nice to know I'm not the only one being treated so shabbily. I hope everyone will LIKE Comcast on FB long enough to post complaints, and then Unlike them.. They really do suck. If they weren't my only choice, I would dump them ASAP.

I'm still angry with them because of their penny-pinching ways after buying the NBC suite of channels. Since Syfy was part of that suite, they decided that even though Eureka was the most popular show on Syfy, and profitable, it wasn't profitable enough, so they first said they would cancel it after a half-season for Season 6. Then as all fans gave a teary cheer that the writers would be able to come in and wrap up all the story lines, the penny-pinchers came back and said "Nah, you can have one more show". So Season 6 consisted of exactly one show. Luckily, the writers were outstanding and did a credible job with what they had--and were able to get in a few jabs at the money-grubbing power-that-be for all the fans who knew the "rest of the story", but it still sucked, and made me vow to find a way to work around Comcast any way I can. Sorry for all your trouble, Kate, but it truly doesn't surprise me.

I will be more that happy to help. Can you send us an email with the account telephone number so we can see what went wrong?

Stuff like this makes me glad I don't have cable in any format. I watch enough TV as is with just the dozen basic channels I get. Glad you finally got the issue sorted out!

I quit Dish Netowork because they,refuse to carry the Yankees. I wrote to the CEO to no avail.
We have DirecTV. They are pretty good, but when we got a new tv, the installer could not figure it out. He left for a while, and I looked at the book went though the steps and voila! TV. Each installer has offered to snap off the third prong on the cord for the box, so we " wouldn't have to hassle with getting a special extension cord". I asked them to look at the wall outlet, yep, three slot grounded outlet.
True torturer-in-chief was Verizon for Internet , they came to my house at least twenty times. Now I pay a little more for Clear and I love them with my whole heart and soul.
Don't bother writing to anyone at Comcast. They don't care and never will. I suggest you divorce quickly so as not to waste anymore time, money, or energy with them. Then write to the regulatory authorities and tell them what happened. They will take your story into account next time Comcast wants a rate increase.

We have DirecTV but not for much longer. We are finally (Thank you to whichever deity you worship!) out of our two-year contract period. It all began a bit over two years ago when we ordered their service. We lived on the bottom floor of a two-story apartment building with a HIGH roof. We mentioned both when we set it up online in the notes section and on the phone with them since this note was so important that they needed to bring a tall ladder (which they didn't do and it took them six hours to find one). We complained with no resolution. Then, whenever we have a cloud in the sky (just about the time we need the weather report), the system goes down (that was actually my clue one time that it was raining outside). Then, we moved. And this was in the midst of the adverts that mentioned how easy it was to move with DirecTV. They charged us over $100 for the privelige. Then fewer channels for more $$$. (They took away CLOO and moved it to a more expensive package which was one of the few channels I watched.) We had decided to go with our local cable company and move from DSL to cable internet (which has the fastest internet). Then, my sister said at Christmas that she plans to simply stream stuff from the channels' websites online. And I took notice: most of what we watch is available online. Hulu, channel websites, and Amazon instant streaming (yay, Prime!) So, while we are going to still switch internet to cable (we've asked and we can) which is SuddenLink and GET RID OF DIRECTV! I have NOT had positive experiences with their customer service, to say the least.

We have Comcast and I actually have great customer service in our area. It doesn't hurt that we also have Verizon FIOS in the area so there IS competition. I have called them numerous times about different problems and have had all of them fixed either immediately or within a 24 hour time with a service call. So I guess we are lucky to have competition here.