We've been cleaning the basement for the past year or so in anticipation of turning it into a room we might actually use for more than just a dumping ground. Our original plan was to put up a little drywall and put down a little carpet. Warm up the space, you understand.

You've heard of scope creep, right? That's where a job keeps getting bigger (and more expensive) because you keep thinking of more that should be done now, because it would be more efficient to do so. Well, let me tell you, our scope didn't just creep, it exploded. 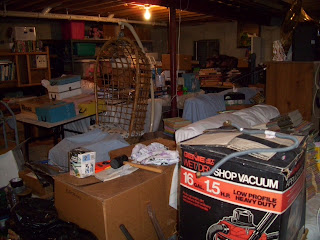 I'll post a few pictures as we put the basement back together now that it's finished, but first I thought it might be fun to show you where we started from.

Yep, this is what it looked like, even after the first few trips to Goodwill. What a mess! We moved in here fifteen years ago and as you can see, that gave us plenty of time to accumulate.

One of the most important things we needed to do first was to make sure we had a working sump pump with a battery backup. We also had to make sure all the seepage cracks in the walls were sealed. 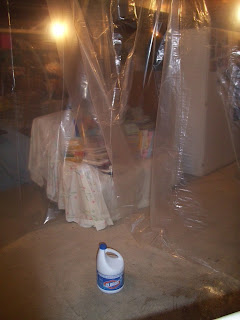 The contractor who was fixing our walls told us that they'd be chiseling out some concrete and they suggested we put up plastic to prevent the dust from flying all over the rest of the house. Great idea. But, couple that with my need to bleach the walls and floors in case of mold, and you have the perfect setting for a Dexter episode, don't you think?

In any case, we were ready to start purging for real. Getting rid of some of our old stuff was easy. Paperwork from 1985? Gone! Why had we kept any of that in the first place? Maternity clothes? Gone! I don't plan to wear them again and no one I know would want to borrow those dated frocks (great word, frocks). We donated those.

When it came to other treasures, however, decisions got tougher. I confess that we probably saved far more than what we really need, but it did my heart good to keep my dad's old paints, and his briefcase. My mom's pictures, her collection of greeting cards she'd saved. Her aprons.

One of my favorite boxes is labeled "Pictures of people we don't know." I kid you not. These are old, old studio photos. Mostly weddings, circa 1920. An occasional funeral (yeah, seriously). Whoever these people were, they were - at one time - important to my grandparents so I can't get rid of them. And it's just one box...

I know it's silly and it makes no sense to keep these photos, but it's impossible for me to part with them.

Do you have anything like that?
Posted by Julie Hyzy at 12:05 AM

Wow, I wish I had a basement like that! But, I do have an attic that really needs to be cleaned out. And I am determined to do that very soon. I don't have stuff that belonged to other persons is my first reaction. But after thinking, I do have some of the tablecloths my grandmothers crocheted, those lacey things. Not that I will ever use them, but I don't want to throw them away either.
My boyfriend is the person who cannot throw anything away. Only if I point it out to him, he says, o those are empty, and puts the things in the trash. He is the one who sneaks things up in the attic, like old computer stuff that does or doesnot work anymore. Why keep it?

I am such a sentamentalist. I have lots of things that belonged to family members that there would be no way I could ever part with them. I am in the process of cleaning out my book room. Everything gets tossed in there until we get time to put it in the right place. Wink, Wink. Well you know how that turns out. Som I too forsee trips to Goodwill in my future.

We have lots of stuff like "photos of people we don't know" (I mean, how could you part with photos of weddings from the 1920s!). When my grandmother passed away, I HAD to salvage from her house the small tin of "ribbon too small to use." I'm not kidding. She lived through the great depression, and I figure there was nothing so useless that she didn't think she might use someday.

So you never know when you'll need those photos. Good luck with finishing the basement!

I also have pictures of unknown people..My favorites are the children all dressed up for a formal picture. We have a loft in the garage filled with who knows what.I would love a basement but those are rare in Los Angeles.

I also have some pictures of unknown people. I believe they are all relatives of my husbands great aunt since that is where they came from. I did get rid of some of them but kept the studio ones and some other nice ones. Her line of the family died out with her and I thought that someone should still care about them. When I am gone I am sure they will be tossed then but until then.....

Never get rid of photos - even if you don't know who the folks are. SOME day they will become important to you - and that day will be when you start doing your family history.

I have been pretty good about purging when I moved ---moved a lot. But, I have pictures, and I am going to start labeling - because eventually in the not too distant future, I will be dead and my children will look at these and have no clue. If the pictures are labeled, someone can decide what they want to keep and what the want to toss. I have already sent pictures to relatives who might like them.

And to be honest, I think there have been many times I purged when I should have held on tightly.

Do you have a scanner? If you do you could scan the photos into your computer and then email any relatives (or write them) and see if anyone can identify the people. You could put the originals in an album if they are not in one.

Sounds like we're not the only sentimentalists in the bunch! I really am glad we've held onto the stuff we have here, and that we've sent other, less-meaningful items to good homes.

As far as those mysterious pictures go, before the box found its permanent home in the basement, we did trot out every shot past the elderly relatives who might recognize people in the pictures. We were able to identify quite a few people that way. The rest are probably people who were friends of my grandparents. They're wonderful to look at - some of the wedding gowns and bridesmaid dresses are stunning. We'll keep them. No question about it.

As far as old pictures go, there's a website called deadfred.com where you can upload the photo and see if anybody "out there" can identify the people in it. I scrapbook and do genealogy, so I LOVE old photos. A photo can be used as historical reference/context on a scrapbook page or on a "vintage"-type card even if you don't know who is in it. Anyone remember the scene in "Schindler's List" where it pans across tables piled with photos? That just broke my heart!

Make sure all your own photos are labeled, so that future generations won't have to wonder "who are these people?"!!

I am hunting for some pictures of my uncle for my mother (he is currently in hospice care - but I do not want to get morbid or down here, he has had a great life!). I was looking at a scrapbook of my grandmother's. Luckily I can identify many of the people in the photographs that are not labeled (but I will have to label them sometime soon in the future). And yes I have come upon some strange things in hunting for the one thing she wants - toilet paper issued by the army during WWII, still in its wrapper and I am sooo happy I never even had to think of using that stuff! (brown, smaller than travel sized facial tissue and not nearly and soft!). I have found stuff pictures from WWI from my grandfather that are only identified by his Company. However, he has written an autobiography, so there is hope for these. And talk about unidentifiable small things in drawers. My photos are labeled!

It is so hard to get rid of stuff sometimes. But I bit the bullet when we moved six years ago and trimmed out a lot. However, in the last few years more and more is making it back into the storage room. (Heavy sigh) I do need to get back at it one day. enjoyed the post. - Karen

I'm loving everyone's stories of things kept and things let go. I sometimes am able to donate an item if I ask myself "Will I ever go looking for this" and the answer is no. But sometimes, even if I know I won't ever need something, I still want to keep it because finding it, even by accident, brings back a rush of memories. Sounds like I'm not alone...

I, too, have a box of pictures of people I don't know. I figure they are relatives of my grandparents but have not way of confirming this. It has prompted my to start labeling the pictures I have of people for future reference for my daughter and grandchildren.