Words Are All I Have, Change Is All I Need

Today is supposed to be the start of our cookie exchange, but I have decided that I will share the recipe next Sunday. In the wake of the death of those babies and teachers, it is difficult to celebrate anything. My heart is breaking. It is a physical pain. It is tears. It is helplessness. And the worst thing is, I know it will happen again.

There is a saying in sociology that "stateways can change folkways." New laws do change the culture. We discussed the documented evidence of this in a college course I took many years ago. Until we passed legislation or the Supreme Court ruled, blacks were slaves, women could not vote and crying "fire" in a crowded theater was just fine because it was "free speech." We changed those things. We made a new reality. We the people did that.

Recently I applied to get a driver's license in my new state. I had to bring my original birth certificate, my original social security card, my previous driver's license, my proof that I married and thus changed my name. I had to bring bills that proved I lived where I said I did as wells as proof of insurance. Then, they checked my driving record to make sure I didn't have any DUIs. I had to make two trips to the DMV and spent several hours in the process, not to mention all the time and effort it took to find all the documentation they demanded. My question is, if I wanted to buy a semi-automatic pistol or an assault rifle at a gun show, would they demand this of me? I think not. No, I KNOW not. Because stateways have NOT changed folkways when it comes to guns in this country. 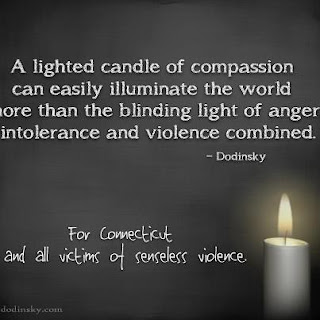 The American people are being bullied by a constitutional distortion that can be amended if we stand together and demand that it happen. If you believe that it's your right to own an assault rifle because of a law that was put into effect when it took a very long time to simply load a weapon, then you are misguided. And I am afraid of you. And afraid for the other children who will die because we did nothing. Again.
Posted by Leann Sweeney at 12:00 AM

I agree with you, Leann. Until we change the laws, enforce stricter laws, nothing is going to change in this country. I was extremely disappointed last year when our governor approved a conceal/carry law. It doesn't exactly make one feel safe, not knowing who might be carrying a concealed weapon. It doesn't make one feel safe knowing virtually anyone can get their hands on weapons, between lax laws, loopholes and the black market.

We can no longer deny a need to change the laws and gun culture in this country. We need to make it harder for people to buy weapons, especially those classified as semi-automatic. The screening process needs to me longer and more in-depth. Safety classes should be required by law. So many things we could change...

Thank you, Leann. You found the words for me. And Heather says it, too: "There are so many things we could change"

This is so true and so beautifully stated. When I first heard this, I was furious again with the NRA. But the truth is, the NRA CAN be defeated. But as a nation, we do not stand up and demand it. I have remained silent too long. Tomorrow every state and federal legislator is going to get a phone call from me. This has to end.

Thanks everyone for your comments. Julie, I am doing the same thing. All I can think about is that it could have been my 5 year old granddaughter sitting in that school.

The first thing I thought of was my own grandchildren. I think also that there needs to be more mental health care in this country.In my county alone. The institutes lost funding and they essentially closed and sent out on the streets people who did not need to be there. The brother of the man that did these heinous crimes said that his brother was mentally disturbed, and played violent video games daily. So why didn't his family do something about it before he could hurt innocent precious children?

My fear is that this despicable tragedy will end just as the others have -- with a cry for gun legislation -- a strong protest by the NRA members -- and everyone backing down. I keep wondering what it will take to get people to take a stand. Will it take the murdering of babies? Well, here it is, folks. Will this be enough? Again, my fear is that it will be business as usual. What a sad statement that makes for our country.

I've never heard anyone explain exactly why they need an assault weapon. But we've heard too many times how those assault weapons are used to kill the innocent. And a classroom full of babies have now become the latest targets. Please make it stop.

I am from a family of hunters and I absolutely agree with you. I wish I were not skeptical that action will happen but after a Congresswomean was almost killed, others were including a federal judge and nothing changed....
But I can and will write to members of Congress, not my own because I live in a very blue state but I want to start with the Congressperson who accepted the MOST money from the NRA.