The election is over, let's get back to reading!

It doesn't seem possible, but the presidential election is now history and we can all get back to our regularly scheduled lives.

Two of our wonderful Cozy Chicks, Ellery and Kate, had the bad luck to have their new books debut Tuesday. Yep, right smack dab in the middle of election day itself. With so much going on in the non-Cozy (real) world, it would be no surprise if we found out that Jennifer's and Kate's new releases got lost in the craziness.

So, let me take just a moment here to do a WOO-HOO shout-out to Ellery and Kate. Here's a little bit about their newest titles and plenty of links (natch).


Written in Stone by Ellery Adams 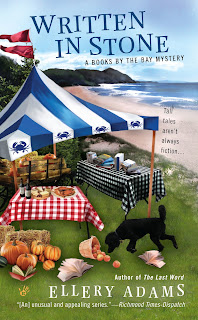 When Munin Cooper, known as the Witch of Oyster Bay, warns Olivia Limoges that death is coming, neither of them realize that it is the older woman herself who will soon be found dead. And Olivia’s instincts tell her that something—or someone—more sinister than a mystical force is at play…


Olivia has a lot on her plate preparing for the Coastal Carolina Food Festival. When she hears the news of Munin’s untimely death, however, finding the murderer takes priority. The witch left behind a memory jug full of keepsakes that Olivia knows must point to the killer—but she’s got to figure out what they mean.
With handsome Police Chief Rawlings by her side, Olivia starts to identify some of the jug’s mysterious contents—and finds its secrets are much darker than she suspected. Now Olivia must enlist the help of the Bayside Book Writers to solve the puzzle behind the piece of pottery and put an end to a vengeful killer before any more damage can be done… 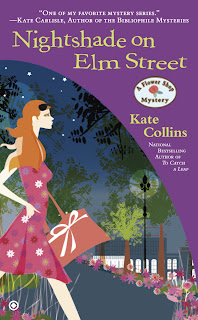 Enjoy her wedding shower…or receive a cold dunking?In addition to running her flower shop, planning her wedding, and juggling two mothers who both want to host an elaborate bridal shower, Abby Knight is facing another complication. Her ditzy cousin Jillian asks her and her longtime beau, Marco, a private detective, to find a woman who’s gone missing from the exclusive beach house belonging to Jillian’s in-laws, the Osbornes. The missing woman is also the fiancée of Pryce Osborne, a wet noodle with a big bank account who dumped Abby just before their wedding several years ago. Merely being anywhere near Pryce makes Abby’s insecurities grow like kudzu….

Then a woman’s drowned body surfaces, and Pryce becomes a prime suspect in her death. Unless Abby and Marco can get a killer to come clean, their bridal shower will turn into a complete washout...and Pryce will be exchanging a sunny beach for a prison cell.

As always, you know these wonderful ladies would appreciate your support. Whether you mention the new releases on Facebook, or Twitter, or you make sure to pick up copies this first, most important week for sales, or you leave a review on Amazon or BN, or... anything that gets the word out, you are appreciated.

I know I have some fabulous reading ahead. The question is ... which one first? Tough decision!

How do you decide which book to read next? Is it dependent on your mood? And do you think that your reading time declined during the election season?

I would have to say what I read depends on two things: one what I just finished reading and two what my mood it. As far as reading during the election season - my readin increased!!! Hate politics and didn't watch it!

The mood I am in mostly determines what I read. However, sometimes an intriguing cover will catch my eye and make me want to read that book.

My mood will definitely drive which book is next pulled from my TBR pile. While bad days lead to lighter, escapism reads good days open me up to tackling a heavier, darker thriller.

My reading actually went up. I didn't want to hear the same stuff repeated over and over election night. I did what I could and just listened to the news the morning after.

If the books on my TBR pile are library books, the due dates may influence me, but it's usually how much the blurb appeals to me and what I feel like reading. Right now I'm on a cozy kick, so I've pretty much finished them off. I'm now reading an urban fantasy which got good reviews, but the blurb didn't appeal to me, so I've kept putting it back on the pile. Finally started it last night and I've whipped through half of it already. Much better than I thought.

I have to admit I read Kate's book right after I bought it. I have been trying to finish my challenges - so I am trying to read the books I need for them first.

Sometimes it depends on the author's release, sometimes my mood. I just wish I had all the time in the world to read all the books that I want.