The Day Before Thanksgiving 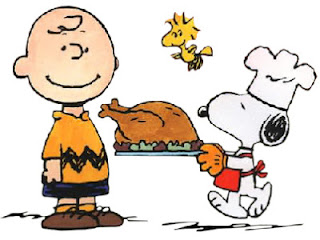 …is busier for me than turkey day, because I do as much as possible ahead of time, and every year I get a little smarter. That way, when the guests arrive, I can join the conversation instead of being chained to the kitchen.

New for this year – I’m making the mashed potatoes today then tomorrow I’ll keep them warm in a slow cooker turned on low. I hope it works out well, because I really don’t like making potatoes the day of.

The family’s secret stuffing gets assembled today, too, since I’m not an in-the-bird stuffing chef, so all I have to do is put it in the oven an hour before the meal.

I’ve had discussions with friends about making the turkey today and slicing it all up, but I love the smell of it as it slowly browns in the oven on Thanksgiving Day. And I'd miss the carving performance by the men in the family.

A roasting turkey in the oven and Macy’s Parade on TV. It doesn’t get any better than that!

Any other shortcuts I should know about??
Posted by Deb at 12:15 AM

I'll be working. Sometimes I fix a nice lunch before going in, but I think I'll get a turkey meal from Wegman's, my local grocery store. I'll celebrate with my folks on Saturday, my day off, with a traditional meal.

Haha, Barb, that's priceless! And K, I like your Wegman idea. Happy Thanksgiving everyone!

No short cuts. I'm doing what you're doing. I'm making the cheesecake and sides tonight, and prepping the stuffing. Tomorrow all I'll have to do is stuff the turkey, roast it and make gravy and nuke the rest.

We've cut down over the years, no more appetizers or soup, the turkey and trimmings are more than enough.

Most sides and pies taste better if made the day before.
For us:
Mac & cheese prepped but not baked
Stuffing made but not stuffed
Green beans Vinagrette done
Sweet potato pie done
Cranberry sauce, done four days ago
Today, I will season the bird, turn him breast side down and leave uncovered in fridge ready to be stuffed and roasted tomorrow by hubby.
Hubby takes over on T day, the only thing I do is make rolls.

Not a lot of shortcuts here because I have to work today instead of stay home and cook. I did make cornbread for dressing last night, and I'll do the biscuits for the rest of it, and the raspberry buttermilk cake tonight after work. The rest of it will get done tomorrow.

I usually do everything the week of and the day before except the turkey, but this year we won't be having company and I had my daughter in the hospital this morning to have her knee scoped to see what was going on. So this year I'll be doing all of it but the pies tomorrow. I did them yesterday.

Shel, I'm coming to your house. That raspberry cake sounds to die for. Sue, hope your daughter is doing well.