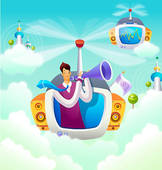 Boy, am I sick of political mud-slinging. I’m in the Chicago TV viewing area, so even though I live in Indiana, I get all of Chicago’s, and Illinois’, political advertisements. And are they nasty! They really go for the throat. And then there’s a backlash from the opposing party to sling mud in the other direction.

Maybe I’m old-fashioned, but I prefer ads touting a politician’s good works. When I hear negative ads about one candidate, I actually think negatively about his or her opponent, and I’m pretty certain that’s not the intended outcome. But I really want to shout, “It’s making you look really petty and mean-spirited, buddy, and there’s no way I’d vote for you now!”

I’ll be so glad when the elections are over.  I’ve heard that in the UK, the candidates are announced six weeks before the election. So before you know it, it’s over!

I’ve heard rough estimates on the millions of dollars spent on political campaigns and TV ads, and I keep thinking that if all that moola was spent on something worthwhile, say, the homeless, the veterans, or senior citizens’ health care, how much better off this country would be. But will the outpouring of money stop? Ha.

Are you with me? And are you sick of the political ads on Facebook, too?
Posted by Kate Collins at 12:00 AM

not only do you have a limited time of ads, the amount they can spend is limited so there are generally fewer that way too!

Way passed ready for the election to be over and yes, I wonder about both candidates when I see a negative ad.

I am with you Kate, but I am guilty of sharing ads on Facebook. It is my one outlet to voice my opinion because I am home bound. I do wish that for each dollar spent on campaign ads the next dollar to charity.

I live in Holland, and our political system is very different from yours. Still, it does cost a lot of money, advertising and campaining. And in those times of crises, that money can be spend much better on people who really need it.

Yes - totally sick of the negative garbage. You can't even get away from it by hiding in your home and turning off TV/Radio, because you get the calls (they're not subject to the Do Not Call Registry). I've started letting my machine pick up at home and telling friends to call my cell. And it gets so confusing. I try to do research on the issues, but both sides are saying totally opposite things (and they make it sound reasonable). Someone is lying, but who? JUST. WANT. IT. OVER!!!

I agree with you spend the money they use to campaign to dig us out of debt and help the seniors of our country. I like the idea of not announcing anything until 6 weeks prior to the election. I turn down the radio and tv when political ads are run so I don't have to hear them.

Spot on. I said this from the beginning of this election. A candidate should get "x" amount of dollars each, "x" amount of ad time on TV (each) only promoting what they are going to do/have done and any extra money should show me what good you do with that money. Aka Homeless Shelters, Animal Shelters, Veterans, Seniors, Health Care Initiative, ect. Your absolutely right saying that its a huge turn off when a candidate slams the other guy. Totally with you and can't wait for the election to be over with tomorrow!! We should totally do it the UK way!! Only 6 weeks ... that sounds lovely!!

Imagine if candidates could only talk about the good works they've done. And how I hate those automated phone calls. I learned that they do that by auto dialers, so if you let it ring 3 times, and someone else picks up, you just get dead air. Annoying, but better than a recorded message.
Someone wake me when it's over!

Imagine if the the campaigns had donated back one hour of ads to aid the relief of the Eastern/Midwestern Sandy fund? The real winners are the advertising agencys and Stations both television and radio that got the billions of ad dollars...sad. the Public seems to lose.

I do not imagine we will see politicians voting to limit campaign time, or the amount of money spent. I wonder why we cannot have people talking about what I have done in life and what I plan to do in life. If that is what the public wants, very sad that the political people do not listen to the public. I am just so disappointed in what the process has become. Bet the Continental Congress guys are rolling in their graves. They all were political for periods of time, but had other jobs and went back to them when they were done.

I too wish we had a limit on campaign time and money spent. The new media don't even let a year go by before they start speculating on who is going to run in 4 years. they should let the winner time to get settled in office and then start judging his/her performance. I will be so glad when the election is over tomorrow night.

I live in NY, a blue state, so no ads for us at least for Commander in Chief. I saw my first Romney ad today but we have had no electricity (or heat) for a week so there is that.
There are lots of local ads on the radio,some of them are pretty funny as if an eighth grader thought up the style and wording.