I need help with a plot point for the next White House Chef mystery. But, in order to request specific help, I need to divulge some key plot points from FONDUING FATHERS and I don't want to do that. This story builds on that one and FF doesn't come out until December. I hope to have a whole chunk of #7 written by then. But to do that I need my plot. 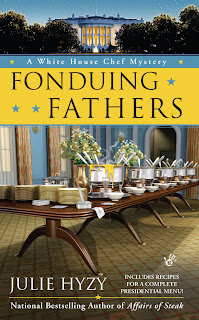 Are you starting to see my problem?

Ollie's life is turned upside down in FONDUING FATHERS. A lot happens to her, personally, and I want to tell everybody what's coming for her, but I know I need to keep that secret.

Suffice it to say that Ollie encounters a problem early on in the story and I need a sensible reason for her to investigate. But I can't say more than that right now, so I guess I'll just muddle through on my own.

In the meantime, I'll ask for your help on this question: Let's say I need have a background "cause" that other characters in the story support. I don't want to make it a political issue because that'll just get ugly. I'm trying to come up with a cause... an active group that supports something that would be hard to argue with. And, I'd like it to be a domestic issue.

My current front-runner is something along the lines of the ASPCA. I'd fictionalize it for my purposes. Who can argue against kindness to animals, right?

Do you have any suggestions? Any "cause" you know of that wouldn't rise political ire?

How about a group that rehabilitates, if possible, rescues from a puppy mill, dog fighting, or an animal hoarder?

How about a cause having to do with children? Like hunger in America? Literacy?

I can't wait for the next installment.

How about Human Trafficking it is not getting a lot of attention.

Since even animal rights issues can create ire (researched it and know this only too well) how about raising money for service animals? There is a lot of need now for service dogs to help wounded soldiers, diabetics, people with epilepsy, blind people, sniffing out cancer, and these animals who help individuals cost A LOT OF MONEY to raise and train. It can be upwards of 30K for one service dog for someone with a need. So raising money for someone who needs an animal or just being part of the bigger picture--creating a fictitious charitable organization--would be a cause many people can get behind. "Like" the Wounded Warriors service dog page on Facebook and you can actually see video of the training. (it's amazing). BTW, I just created a fictitious charity in the book I just turned in. :-)

You could also do a medical awareness cause...Breast cancer, autism, heart disease, St. Judes. Not many people can argue about helping raise money for the sick. Also, MADD Mothers Against Drunk Driving. That is a good cause that many cozy readers can relate to. Can't wait!

These are *great* suggestions! My poor murdered character will have been a supporter of one of these. I'm making a list now. As the story unfolds, I'll see how his personality figures with each one.
THANKS!!! Love these!

And if anyone has any other suggestions - Keep 'em coming!

What about domestic violence? I am a member of a group right now, Attorneys Serving the Community, and every year we pick an entity/organization doing good work in the community. This year it is Hope's Door, which is a group that offers temporary housing to women and their children who are victims of domestic violence. Who can argue with that?

Aryn is pointing out what I was saying. There is a great deal of dis-information about animal care and it is very politicized. Animal welfare, yes! Animal rights, maybe not so much. I wrote a whole novel hoping to clarify the distinction!

You might take a look at the AAUW website and see if anything there is a possibility (although most might be political). The other cause that comes to mind is food banks - seems like a natural for a chef mystery!

Wow, I'm glad I put this out there. Thanks for the clarification. I will *definitely* come up with a fictional cause so that I don't inadvertently throw roses at one that I wouldn't want to support in real life. I truly, truly appreciate this input!!

I didn't know that about the ASPCA or Humane Society. More research is in order!

Food banks are a great idea, but in this case, I have to have something out of her purview. I'll keep that in mind for future books, though!

Community gardens are big right now as well. Money has to be raised to establish them, etc.

Greyhound rescue (or any kind of animal rescue). A friend of mind is very involved in greyhound welfare after the dogs are deemed no longer useful for the dog tracks.

Heifer Internationall has lots of domestic projects in the US that are totally fascinating.

The county I live in has two organizations (MUST and Center for Family Resources) that are always developing new programs to serve people in need.

Backpacks for kids (sending food home with low income children on the weekends).

Summer lunch program where a sack lunch is made up and delivered every weekday during the summer for children who get free lunches during the school year. MUST also collects books to distribute on a random basis with the summer lunches to encourage reading.

But I really do like the service dog/animal concept since there is such a great need for animals that can help people.

Another thought would be getting rid of graffiti. Could involve lots of stake-outs at night and chase scenes. Or coded messages that speak of the murder. But its not as altruistic as the other ideas.

Meals on Wheels. Or a service to help caregivers have time off....caregivers of Alzheimer patients maybe?

Vicki - you've given me a lot to think about. Thank you!

Ann - I really like that idea. It may not work with this particular plot, but I may tuck that one away for another time!

Thanks, Annette! Thanks, Lizzie!

Thanks, everyone. Wow, what a fabulous think tank! You are all the best!