Welcome to Dru's Cozy Report. This month we have two new series for your reading pleasure. 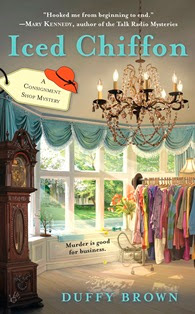 Reagan’s messy divorce has left her with nothing but a run-down Victorian and a bunch of designer clothes. Strapped for cash, Reagan makes use of the two things she has left, turning the first floor of her home into a consignment shop and filling it with the remnants of her rich-wife wardrobe. Thanks to his cunning lawyer Walker Boone, her ex got everything else, including the Lexus—not to mention a young blond cupcake. When Reagan finds the cupcake dead in the Lexus, she’s determined to beat Boone to finding the murderer. As it turns out, the gossip fiends flooding Reagan’s shop will give her a lot more than just their unwanted clothes—they have information more precious than a vintage Louis Vuitton.

Reagan Summerside may be down and out but this spitfire knows what she is doing when it comes to saving her treasured home. With her aunt Kiki by her side, she’ll scour the streets of Savannah to find a killer and nothing will stop her; not even threats against her own life.

This lighthearted drama pulls you in immediately and doesn’t let you go until the final page. With so many potential suspects the author does a good job in keeping the mystery exciting with so many twists and turns that it’s hard to put this book down. The situations that Reagan finds herself in and out add comedic interludes as she searches for a killer. This book had everything, laughter, a good mystery and the possibilities of a friendship and/or romance not yet seen. Reagan is adorable and her aunt is a hoot and her friends add supporting roles in this delightfully charming whodunit. Boasting southern charm with a quirky cast of characters and great dialogue, this is a terrific start to what I hope is a long-running series. Visit Duffy at http://duffybrown.com
FTC Full Disclosure - I bought my copy of Iced Chiffon 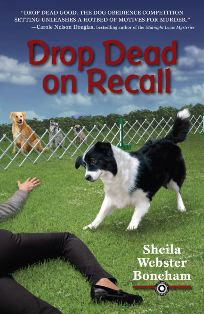 Drop Dead on Recall by Sheila Webster Boneham is the first book in the new "An Animals in Focus" mystery series. Publisher: Midnight Ink, October 2012

When a top-ranked competitor keels over at a dog obedience trial, photographer Janet MacPhail is swept up in a maelstrom of suspicion, jealousy, cut-throat competition, death threats, pet-napping, and murder. She becomes a “person of interest” to the police, and apparently to major hunk Tom Saunders as well. As if murder and the threat of impending romance aren’t enough to drive her bonkers, Janet has to move her mother into a nursing home, and the old lady isn’t going quietly. Janet finds solace in her Australian Shepherd, Jay, her tabby cat, Leo, and her eccentric neighbor, Goldie Sunshine. Then two other “persons of interest” die, Jay’s life is threatened, Leo disappears, and Janet’s search for the truth threatens to leave her own life underdeveloped – for good.

When a competitor suddenly dies, the cops suspect foul play and soon it becomes apparent that a member of Janet’s dog competitive group is a killer and with Janet assisting the police, she becomes a threat to the killer who will do anything to keep her dog-tied.

This was a good read. The story was fast and easy and I enjoyed the insider’s view of competitive dog training and botany. The mystery was good as it kept me turning the pages to see what happens next. Janet is a formidable heroine whose concerns for the dogs prompted her sleuthing and when her own pets are targeted, nothing will stop her until the person is apprehended. We got to see two sides of Janet as she deals with her mother’s health issues and the blossoming friendship she has with fellow dog lover, Tom. I also loved the internal conversations she has which added humor to the story. I’m looking forward to reading the next book in this enjoyable new series that is a welcome addition to the cozy genre. Visit Sheila at www.sheilaboneham.com
FTC Full Disclosure - I bought my copy of Drop Dead on Recall
And check out these other October releases. For more information, click on the covers:

I'm not a die-hard cozy reader (my tastes run toward harder edged mystery/suspense stories) but I thoroughly enjoyed Iced Chiffon. I also hope Reagan comes back for another round.

Iced Chiffon sounds good. I'll have to look it up! Thanks for the links to the other cozy's out this month.

Good job as usual, Dru! I have both books on my TBR pile. The first one because I met the author at Malice this year, the second one because of the cute title.

I loved Duffy's book! And now the second one is in my TBR pile...

Also love all the thumbnail covers. Great to see what's out there this month. Thanks, Dru Ann!

great picks again, thank you! I am hoping the latest Laura Childs gets here soon.