Throwing in the trowel

Yesterday we picked our first tomato of the season.  It was not a beauty.  In fact it had a bad spot where it was starting to rot, and yet inside it had green patches that hadn't yet ripened.

This has been one weird growing season. Half the apple crop in our nearby county was ruined when the warm March temps caused the trees to bloom prematurely.  Then a frost hit.  Now that it's close to harvest time, many of the trees don't have even one apple. 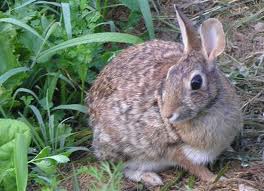 Bunnies ate all but two of my sugar snap pea plants.  They ate every single one of my bean plants.  Most of our tomatoes have suffered from blossom end rot from not enough water early on, and splitting at the tops from too much water later on.

I must admit, I'm tempted to never plant a single veggie again.  It's heartbreaking when, between critters and the weather, all your hard work goes for nothing.  But something inside me desperately wants to grow my own food. It feels important to be able to do this.

Next year we're planning to abolish the much longed-for veggie garden and plant flowers we know the ground hogs, bunnies, and chipmunks won't eat.  Next year (as this), I'll just go to the local farmers market where I can buy fresh green beans, corn, tomatoes, and pay a lot less than I would at the grocery store and suffer absolutely no heartbreak at all.  Sometimes you have to admit defeat.  After more than twenty years of attempting (and usually failing) to grow veggies, it's time to throw in the trowel. 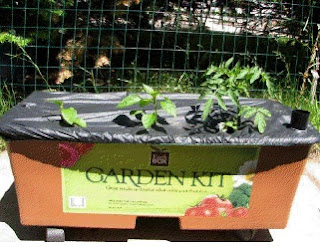 Then again ... I've heard some people have wonderful luck with earth boxes on their decks or porches ....

Have you been tempted to just give up gardening?
Posted by Unknown at 4:09 AM

My garden is JUST like yours-including bottom rot on the tomatoes and many veggies eaten by bunnies. But-I go at it every year anyway. Even if I don't harvest-I like to look at the stuff. I mainly plant herbs and have fruit trees (I see some apples-we'll see if they're edible). Bunnies don't like basil! So I have lots of that and my sage is doing nicely. I'll never be self sufficient-but I enjoy having a garden.

Same problems here, too---except it's the deer that eat everything. I gave up the garden a few years ago and just plant herbs, tomatoes, and a few other things in pots,

I gave up growing things years ago. I have a brown thumb and can't seem to grow anything, so I let those better equipt for it than I do it and I pay them for their efforts.

Lol, I just started a small flower garden in my backyard, digged up some tiles to create a small space. And I love it. The enormous amount of rain has made it grow and grow and grow (I chose lots of climbing the wall plants/vines).

But can't you just put a short fence next to your vegetables to at least keep the bunnies away? and plant a little plot with carrots or such they are welcome to have?