Moving out, Moving in...

On July 29th, Leann posted this farewell to her home in Texas and talked about major transitions.

A little less than two weeks later, our family faced our own major transition when our middle daughter packed up and moved to... you guessed it... Texas!

We've known about this move for months. She's studying for her Master's Degree in Orientation and Mobility for the Visually Impaired and Illinois doesn't have the internship opportunities she needs. Texas School for the Blind and Visually Impaired does. 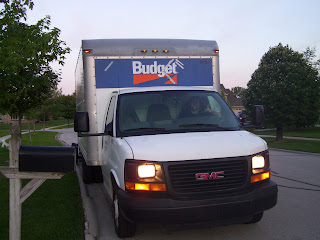 And so, as Leann makes her home in South Carolina, our Sara will make her new home in Austin. We're lucky that her boyfriend, Luke, is with her. It's so nice to know that she's not going it alone - and he's a honey. They have their little tuxedo cat, Kitka, who made the two-day drive with them (yikes!). Because they have two cars, Luke drove the moving van with his car hitched to the back and Sara drove her car -- with the cat.

We didn't envy the long drive, the truck full of boxes that needed to be unloaded without any outside help, or the "where's the nearest grocery store?" issues. Oh, to be 23 again and to feel as though there's nothing you can't do. Hmm... maybe I do envy that, a little.

They've been keeping in touch really well and so far, so good. But I miss them already. This is going to be tough for me. We'll go visit them in the coming months, but for now I'm sure they're happy to be starting their adventure.

How about you? Any adventures you care to share?

Oh, Julie. I'm so excited for Sara, but at the same time, I'll miss her, too. I've gotten used to getting to visit with her when I get to attend your signings. When you go visit her, be sure and eat some genuine smoked brisket for me (that's the thing I miss most about living in Texas). *hugs*.

It sure sounds like a lot of fun, starting all over, together. And hard work of course. I hope they have a great time in Texas!

Julie---I had four of those transitions with my four daughters. It's a natural progression with our children. And it's definitely a change---to be celebrated for your daughter and to contemplate quietly with yourself. Letting go so they can successfully launch on their own. It's actually what we've all been building for as parents. You've done a good job, Julie. Celebrate. :)

How exciting for Sara! Quite the adventure. Hugs to you --and remember she's just a flight away. Skype helps, too.

Hi, Shel - I *knew* you'd have some great suggestions for us! Can't wait to go visit her and have some of that brisket!

Aurian - it does sound like fun, doesn't it? I'm hoping everything continues to go well for them.

Maggie - Thank you!! It is a celebration, though a bittersweet one, isn't it? Thanks for the boost!

Heather - And Sara's super good at making sure she emails me every day, so that's good. I'm just so used to having her closer to home. I guess this is the best reason in the world to visit Texas!

Congrats to Sara. It's always hard, but think of the adventures she'll have and share with you.

Oh Julie..emotional times, I know. I've read each of the comments and can't add anything....we've had transitions like this ourselves...other than agreeing especially with what Maggie said so eloquently. Here's to success for "the kids" and newly discovered adventures for you! Adrienne in MN

I live in Austin and I think Sara and Luke will enjoy being here. There's lots to do and see and it's a very diverse community with lots of young professionals. As far as I'm concerned, if you're going to live in Texas, Austin is by far one of the premier places to live. The only thing I really dislike are the hot (very hot!) summers, but the mild weather throughout most of the winter certainly helps me forget July and August. Please tell her 'welcome' to the Lone Star state!

broken stuff is an issue with many movers, that i can deffinately add for you. well.. actually my previous moving companies easton pa