Welcome to Dru's Cozy Report. This month we have three new series for your reading pleasure. 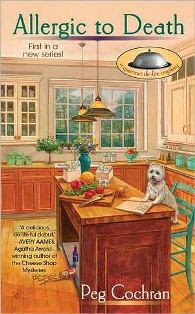 Business is looking up for Gigi's Gourmet De-Lite, thanks to her newest client, restaurant reviewer Martha Bernhardt. Martha has the clout to put Gigi's personal meal plans on everyone's lips. But instead of dropping a few pounds, Martha drops dead from a severe peanut allergy...right after eating one of Gigi's signature dishes. When the distractingly debonair Detective Mertz identifies traces of peanut oil in Martha's last meal, Gigi suddenly finds her diet catering business on the chopping block. Now she'll have to track down who tampered with her recipe before her own goose is cooked.

In the small town of Woodstone, someone is using delicious gourmet food as a murder weapon and Gigi has no other course but to find a murderer to protect her burgeoning business and reputation.

I like it. The key characters are all likable, from Gigi whose dogged pursuit of justice helped to apprehend a killer. There’s her best friend Sienna who plays the role of sidekick and lends a welcome ear when needed. Adorable Reg who gives Gigi unconditional love and then there’s Detective Mertz. The author did a good job in keeping me in suspense in this nicely prepared mystery that entertained me from beginning to its rewarding conclusion. This is an irresistibly and appetizingly delightful debut in the cozy genre that I hope is here to stay. Visit Peg at www.pegcochran.com
Full Disclosure - The publisher sent me a copy of this book
A Spoonful of Murder by Connie Archer is the first book in the new "Soup Lover's" mystery series. Publisher: Berkley Prime Crime, August 2012 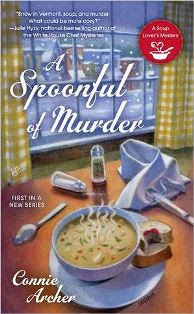 When Lucky Jamieson inherits her parents' soup shop, By the Spoonful, she realizes it's time to take stock of her life. Should she sell her parents' house or move in herself? Does she really want to run a restaurant business? And what about her grandfather Jack, who seems to be showing signs of Alzheimer's? But her life decisions are moved to the back burner after an icy blonde tourist is found frozen to death behind the soup shop. And Lucky is bowled over when her soup chef, Sage DuBois, is led out of the kitchen by the police. As suspicion and speculations snowball, Lucky decides that the only way to save her employee and her business is to find out herself who iced the tourist--and landed her chef in the soup.

Coming back to Snowflake and keeping her parent’s business operational was top of mind until a dead boy is found in the back alley. When her chef is arrested, believing in his innocence and trying to keep her business afloat, Lucky seeks clues to find the real killer.

I like this book. The writing was comfortable as was the tone of this endearing drama. The mystery was good and every time I thought I knew the identity of the killer, the author changed directions and caught me by surprise when the killer was revealed as I didn’t see it coming. Lucky is a great character who is surrounded by a wonderful supporting cast which includes her grandfather Jack, a friendly doctor and patrons who dine at her soup shop. This is a terrific read and I hope we get to see more of Lucky and her friends for a long time in this charmingly enjoyable debut with a bonus of delectable recipes. Visit Connie at www.conniearchermysteries.com
Full Disclosure - The publisher sent me a copy of this book
Dying to Read by Lorena McCourtney is the first book in the new "Cate Kinkaid Files" mystery series. Publisher: Revell, August 2012 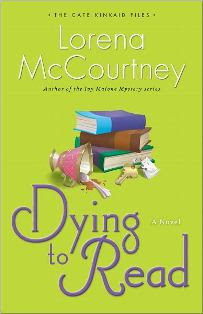 Cate Kinkaid's life is . . . well, frankly it's floundering. Her social life, her career, her haircut--they're all a mess. Unemployed, she jumps at the chance to work for her PI uncle, even though she has no experience and no instincts. After all, she is just dabbling in the world of private investigating until she can find a "real" job. All she has to do for her first assignment is determine that a particular woman lives at a particular address. Simple, right? But when she reaches the dark Victorian house, she runs into an hungry horde of gray-haired mystery readers and a dead body. This routine PI job is turning out to be anything but simple. Is Cate in over her head?

All Cate had to do was locate a missing person and her first case for her PI uncle would be complete. Who knew a knock on the door would find a dead body and the beginning of a journey that involved meeting a carefree woman, book club members and people set out to do some harm.

This was a good read and I liked how the action took its course as we watched Cate travel down the slippery slope of being a private investigator as she never gave up searching for answers and the truth even when her life was threatened. This light-hearted whodunit was evenly-paced as the author did a good job in keeping me in suspense, especially with the situations that Cate found herself in as the case came to a close. Cate is a likable protagonist surrounded by a good supporting cast in this pleasantly appealing series. This debut mystery series is a great start to what I hope is a long stay. Visit Lorena at www.lorenamccourtney.com
And check out these other August releases

Everything looks so good! I can't wait to read them. Thanks for posting the monthly list!

These look fabulous, Dru Ann! I need to get reading.

Thanks for the introduction to three new series. The last, Dying to Read. looks very interesting. Thanks, again!

Thanks so much for including Deadly Politics, Dru. :)