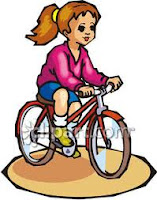 Yes, you heard that right. Suri Cruise, daughter of actors Tom Cruise and Katie Holmes, is learning how to ride a bicycle. And get this. Suri wore flats. Not sneakers. Not flip flops. Flats. Even more startling – her mom wore a white T-shirt and blue jeans.

Are you stunned? Awed? Intrigued?

I don’t know about you, but I’m simply (yawn) not that interested.  I only bring it up because this story was a headliner on Yahoo News, as reported in US magazine, where it was also, I’m sure, a big headline.

Do people really care that this particular six-year-old is learning to ride a bike? Do they REALLY care that she wore flats to do so? If that’s not bad enough, readers in their follow-up comments were actually criticizing Katie Holmes for letting Suri wear flats for her lesson.

I remember when my own children learned to ride a bike. They wobbled and teetered and fell several times – and would have been mortally embarrassed if a camera crew was filming them. I doubt they’d have wanted a second lesson.

You could argue that anyone with fame has to take the grain with the chaff, so to speak. But poor Suri didn’t ask for fame. Suri, by virtue of her parentage, is going to be subject to such embarrassment every time she goes out. Should her mom rent an indoor arena to teach her in private? Or should Katie be able to enjoy being in the park with her child like any normal citizen? Should we give celebrities their privacy?

What’s your opinion?
Posted by Kate Collins at 12:00 AM

Lol, I could not care less what celebrities or their children are doing in daily life. I admire them in a movie, and that is it.
So please stop waisting money reporting everything about them, and leave them alone.

It's no wonder so many children of celebrities end up in trouble, or drug or alcohol dependent. Living in a fishbowl your whole life has to be brutal.

Who??? Hey my daughter learned to ride a 2 wheeler when she was 3. What took Suri so long? LOL

Lol! I thought the same thing when I saw that as a headline. Who cares! Same thing with the Kardashiens. Who are they? and why do I care?

Shame on the world for following this little girl and making fun - Katie is trying to raise her as best she can...I say leave them (especially Suri!!) alone to enjoy life!
Maria

I know people say that if the public didn't pay attention to all this then the media wouldn't publicize it--but when do we have a choice? I expend too much energy keeping up with my own kids. Don't mean to rant, but come on...

Yes, I think they should just be left alone. Let the girl learn how to ride her bike in peace. I remember seeing a photo of Britney Spears sitting on the beach, and then there was the same photo of her but it included the massive photographer presence that was taking that picture on the beach. Absolutely insane. I would not want to be a celebrity in this day and age, no way!

Because I live in NY I get far too much Katie/Tom/Suri information. There many letters to the editor about the fact that her parents carry her around all the time,(one person wanted to know if Tom will carry her up the aisle on her wedding day)
I don't care about these people but I understand many young women and girls are enraptured by celebrity.

Just let the child be a child!

It has to be an unreal lifestyle for a child. "Mommy, why do I have to dress up to go outside?" I wouldn't wish it for my kids.

Of course we should leave the kids alone. For that matter, we should leave the celebrities alone. Their private lives are their private lives and are not the concern of anyone outside of their family, friends, and colleagues. Which, I know, is a minority view. :( Still, I can't help but think that this sort of interest is characteristic of adolescents dreaming about their heart-throbs as part of their psychological preparation for adulthood. Bothers the heck out of me that grown-ups seem to be indulging in it, too.
--Mario R.

I wish we could let them all be. But I do remember being totally devoted to finding out about Elvis, Fabian, Frankie Avalon! In those days though it was mostly through fan magazines and some TV. Certainly no internet or instant messaging, twitter or facebook. OH MY!