Did You Hear the One About the Pregnant Horse? 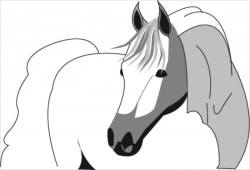 Seriously.  Because this story made the national news. My local newspaper reported it on the sixth of July, and it was so compelling, I decided to share it with you.

On the night of July Fourth, a pregnant mare was so spooked by the fireworks and gunshots (gunshots? really?) that she broke out of her stable and took off. Unfortunately, as she crossed a railroad track, one of her hooves became lodged beneath a tie and she was unable to free it.

Sometime later, a woman driving across the tracks saw the poor horse lying on her side and thought she was dead. Then the animal raised her head and looked at the woman. Instantly, this kind person pulled over and found a number to call on the crossing gate to alert the train’s command center.  It wasn’t known whether they could stop the train in time, however. The police were contacted and arrived a short time later.

By that time, a group of people had gathered around the horse, and someone knew who the owners were and called them.  Then this larger group of people got together and were able to pull the horse free before she got another hoof stuck, or a train approached.

Being a writer, I could very well imagine the cheers that went up when the horse was finally freed, and I even imagined that poor animal’s distress lessening. I cried.  Reading on, I learned that this same horse had been rescued by her new owners just one month earlier from a slaughter house.  Her life had been spared twice. I cried harder.

The very next day, the mare delivered her filly, and now we’re waiting to hear if the filly will be okay, because the mare was under such stress that it affected her baby’s health. Please say a prayer.

The national news picked this story up because of its human interest appeal, just as it is now reporting on the baby beluga whale  up in Alaska that got separated from its mom and is now in jeopardy.  Experts from all over the country are flying in to try to save the baby.

If you haven’t seen the movie, BIG MIRACLE, I urge you to rent it. It’s about how this country came together in 1988 to save 3 stranded whales in Alaska. And that’s the point of this blog. I find it utterly amazing and somehow redeeming to see people of all sorts pull together to save an animal’s life. I’ll bet every one of those people who gathered to help that pregnant mare went home changed in some small way.

Do those kinds of stories capture your heart or attention? What is it in our nature that makes it so?
Posted by Kate Collins at 12:00 AM

Stories like this always pull on my heartstrings, so I'm relieved to hear that they managed to rescue the mare. The perfect ending to this touching real-life story would be for her filly to pull through.

Wonderful pearls of truth that apply to our time.1 Week Pregnant Signs

It's so nice to hear that there are such kind people in a world where animals are mistreated on a regular basis. Let us know how the filly does if you hear.

Sue, I'm hoping to get word today. I will post any news I get on the blog.

I just read an update on the filly's status. She's holding her own, being fed every 2 hours. So far so good, and the filly's mom is doing well, too. The owners were so grateful she didn't suffer any broken legs, just some bruising and stiffness.

Thank you for writing and sharing the story with your followers..
Thanks so much. -
Roni M. Byvoets
Owner of Anna and Baby @ Faith, Hope, and Love Farm

"Do those kinds of stories capture your heart or attention? What is it in our nature that makes it so?" They certainly capture my attention. There is so much going wrong in the world one can hardly bear watching the news, sometimes. There doesn't seem to be anything much we can do about things short of sending money (or votes) to the people who might be able to do what we can't ourselves ... And then a story like this comes along. Ordinary people like ourselves, who do The Right Thing simply because it is the right thing, and reaffirm our faith in humanity. A bright, shining light in what at times seems all murkiness and fog and fear and sadness. How can you not be drawn in?--Mario R.

South Alabama Equine Rescue & Rehabilitation is responsible for saving the mare from the sale in AL. She was then shipped to her new home with the Byvoets. I wish that the news would get their facts straight...
(Hope the filly pulls through)

Thanks for the great news Kate!

And thanks to South Alabama Equine Rescue and Rehab for saving that wonderful little mare. Who doesn't have a soft spot in their hearts for horses?

South Alabama Equine Rescue is not fully responsible for saving this mare at all. It was me Roni Byvoets and a few donators who bought this mare. Laura posted her on facebook looking to find someone to buy her during the sale which one one did. I was told by a good friend and I am the one who stepped up and paid for her and bought her from the kill buyer. Yes laura was there and yes she talked to the man but Im the one who stepped up to buy her NO on else! Yes laura took her to her house for about a week, what I paid for her to feed her. I paid for her vet work, farrier, and shipping to Indiana. So please don't start problems when there is no to be started. -Roni Byvoets