Queen of the Jungle 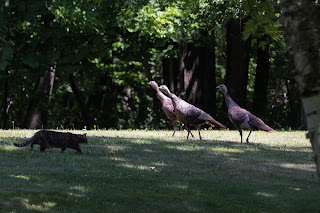 She walks among them, fearless, confident in her reigning power.

She lives in Shangri-La. Nine glorious acres of hardwoods with the lower creatures - raccoons, opossums, deer, squirrels, chippies, and turkeys.

The Queen treats them well, considers them part of her royal court. 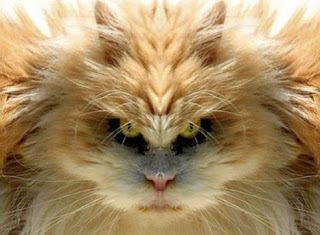 But just let the ruling cat from a neighboring fiefdom show up. He has ten pounds on the Queen and has a full set of retractable claws, which she doesn't, considering the palace has certain requirements. But that doesn't stop her from defending her turf.

And effective.
He quickly retreats. 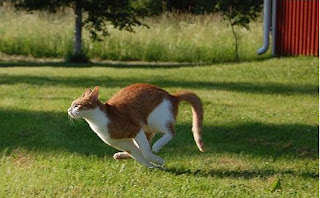 Sigh.
Just another day in the life of the Queen of the Jungle. Inside the palace, a feast awaits the magnificent victoress.

Who, pray tell, rules your kingdom?
Posted by Deb Baker at 12:15 AM

My kingdom is ruled by Clawdene Girlie Girl,a Polydactyl Maine Coon and Scooter, a beautiful black and white Persian. They guard the front yard from their living room window. It is like kittie vision to them. They follow me wherever I go in the house. They actually stear me toward the treatsie cabinet. They are also my own personal alarm clock, even when I don't want to get up at six o'clock! They become rather indignant when I roll back over. They will find ways to change that, like scratch loudly in the litter box or play with jingle balls in the hall. Yep, they have me trained quite well.

Lovely pictures! and a great tale :) I rule my own Queendom ;)

Daisy, our Beagle-mix pound rescue (The vet thinks she's mixed with Walker hound, but I'm thinking she's more retriever) rules our kingdom from her three thrones: our son's bed, the living room couch, and our bed (but only if her "shows" are on...she loves reality tv drama). She stares you down and steals your side of the bed if you change the channel!

My world is ruled by a Maune Coon named Bessie who makes sure I don't oversleep or that I never run out of tuna.