Purchases with "some assembly required"

It was hot yesterday, so Mr. L and I went to the store to buy an oscillating fan.  The box was square, and there was a small notation that there was "some assembly required."

When we opened the box, we found that the only thing that wasn't assembled was the fan motor.  The instructions weren't of much help.  They had probably originally been written in Chinese and then translated to English.  Mr. L read and I did most of the assembly.

First, you had to put the legs together, then put on decorative pieces that hid the unsightly screws.  When the stand was completed, it was necessary to put the motor on the stand, which didn't want to go on.  After some fiddling, I got it on.  Next, attach the back of the blade guard, but first you had to take off a big plastic nut.  I put the back on, then the nut, then the fan blade, and then the front blade guard. 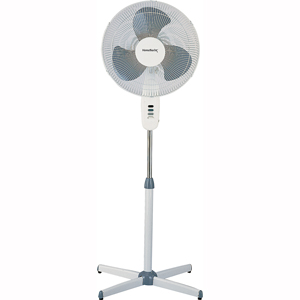 Okay, this only took about twenty minutes, but I swear it was the longest twenty minutes of my life.  Finally, the thing was finished and we plugged it in with trepidation.  Would it actually work?  Would it wobble for a minute or two and then fall apart in a heap?

I turned it onto low, then medium, then high.  Nothing blew up.  Nothing fell off.

What have you purchased lately that had "some assembly required?"
Posted by Unknown at 6:20 AM

They should have an option at the store - an extra $5.00 and have someone put it together for you. I'm probably dreaming about the price, but wouldn't that be nice?

We had to put one of those together a few years ago. Not fun. Congrats and getting it done, and that it works! Yeay!

Lol, great story. Lucky for me, my boyfriend is very handy, so he does most of the assembling needed.

Yesterday, my husband & I put together the medicine cabinet with three mirrors. The ones on the side swing out. The middle one opens like a regular medicine cabinet door. I helped put up the cabinet & held the mirrors as my husband fitted them onto the slots & tightened the bolts. We added the shelved. My husband spent over 1/2 hour adjusting the mirrors
so they opened & closed without rubbing against each other.

We recently replaced a similar fan that needed "some assembly" too. The upside is knowing how to take it apart/reassmble for cleaning. :-) The most challenging assembly project ever for us though was my 5 year waited for scrapbox workboxes--2 of them took days to assemble. It was so worth the wait and work but the second one was a bit like the second strip of wax hair remover strip--we knew exactly what what was coming and too late to back out of it! They are a dream to have, but when I mentioned the matching desk to my husband he pretended not to hear.