I've known Tom Schreck since the beginning of my publishing career when we were both newbies. He's compassionate, funny, as loyal to his friends as Al, and a great writer. Make sure you read the small print at the end of his post. You might win a Kindle Fire! Deb 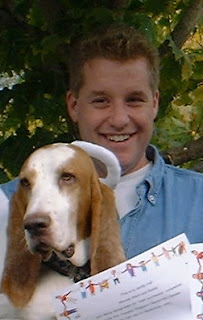 What’s a dog’s job in a mystery?

Allah King, my mystery series’ Black Muslim basset hound (often shortened to “Al”) was important enough to be featured on the cover of my first four books. He returns in my fourth, The Vegas Knockout and once again plays a significant role.

Dogs do a variety of things in plots. Sometimes they are, well, merely pets that accompany their humans occasionally or curl up on the couch with the protag at the end of the day. On the other extreme we’ve seen dogs as first person narrators like the series that features a basset hound that believes he’s Elvis Presley incarnate.

Al falls somewhere in the middle. He stays very true to the basset form and, trust me, I’ve done a dozen years of research on this aspect of my books. He’s obstinate, disobedient, self-absorbed and flatulent…and he also has some negative qualities. He barks loudly early in the morning, he indiscriminately fornicates, sometimes with inanimate objects and he distrusts people with headphones.

He’s been known to dis my main character Duffy frequently and on those odd occasions when Duff is about to get lucky, he’s injected his own effective birth control method christened basset-interruptus. He’s also fiercely loyal and when needed he has come up big more than once.

When he comes up big it is open to the readers’ interpretation just like dog behavior is often up to the interpretation of the owner. When Al plays with the vicious pit bull, teasing him to chase him and then quickly ducks underneath a stone bench so the pit konks his head, we are left to wonder if he was just recreating the game he plays every morning that results in Duffy cracking a shin. Or was he setting up a bully to get his comeuppance?

Well, maybe we don’t have to wonder too much.

When Al comforts kids and growls at bad guys I don’t ever feel as a writer I’m jumping any sharks. My bassets are therapy dogs that go to work with me at my day gig where I work in a school for kids with autism. My first hound Buddy would threaten the water delivery man’s life every time that interloper had the nerve to deliver H20 but when a kid who might have a loud tic, Tourette’s or poor coordination would come into the office Bud would lay down and offer his belly.

Bud died way too soon, right around the time I was trying my hand at this mystery writing thing. I made a promise to him that I’d always have a rescue hound and if the damn manuscript ever got published I’d kick in some of the money to basset rescue. That was seven years ago and now my wife and I tour the basset rescue circuit selling books, auctioning off character names (human and canine) and getting drooled on. Last year I’m proud to say we went over the $20,000 mark for donations.

No one has to convince me of the magic that comes with hounds and I think it explains why so many waddle their way into the pages of mysteries. Personally, I don’t want them to have super powers. I like it when, as a reader, I have to wonder a little bit about the dog’s intention and the role of coincidence. That’s what it’s like in real life.

Actually, now that I think about it, I’m not so sure. Sometimes when I write something I get a little twinge in my gut. I heard Stephen King once say that you can write anything as long as it is “true.” He wasn’t talking about fiction and non-fiction. I think he was talking about that twinge I get in my gut.

I’m thinking back to Bud’s visits to school, to nursing homes and to the VA and how people smiled, kids calmed and old folks perked up.

I don’t wonder about Bud’s intentions.

Nor do I wonder if he had super powers.
============================
Tom Schreck writes the Duffy Dombrowski Mysteries and his newest release The Vegas Knockout, will be available on May 15. Visit www.tomschreck.com and “like” his fan page on Facebook at http://www.facebook.com/DuffyDombrowski for a chance to win a Kindle Fire.
Posted by Deb Baker at 12:15 AM

Thanks for the guestpost, I enjoy pets in my cozy mysteries.

I think it is awesome that you and your wife donate to the Basset rescues. My Dad passed away in a VA Nursing Home. I wish they would have had pets there for the Verterans. Daddy would have loved it. I think it is wonderful when people take the time to take the pets to the people who need them the most. Thank you!

I am so glad to have found this series! Bassets are my kind of dog... we're on our 2nd one... our first, Daisy, left us a year and a half ago and I wouldn't consider any other kind of dog.
Wally is our baby now, and he is notorious for all of those "traits" mentioned above! So fantastic that these dogs are helping kids. Just looking at them brings a smile to people's faces!
Great work! Hooray for Bassets!

It never fails to surprise me when I come across a popular author that I've never heard of! Geeze...going to download the first Duffy book now and catch up.

I love dogs in mysteries, reading and writing them! And I love that Bud has a legacy. What a great way to honor him. They become like part of the family, don't they?

Now here is a series I can really enjoy. Added to reading list for next week. Thanks for your posting.

Wow, thanks for such a warm cozy welcome!!! Or as my hounds might say Arooooooooo!

Our basset says aroo to Al. I agree with the stubborness..it is his way or the highway but they are the most lovable of dogs.

Nice to meet you, love pets in books. Remember when Columbo (on tv) carried his basset into the vet's office and told the vet that the dog (don't remember dog's name) was depressed? The vet asked him how he could tell!