The Search Goes On

You’d think that since we’ve done this before, searching for a college for my daughter (my youngest) would be easy. Nope! 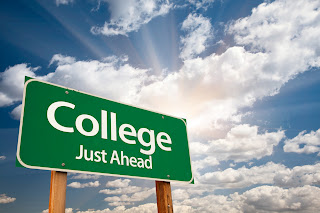 We’ve seen big, medium, and small. We have a few more left to see, and she still doesn’t have an absolute favorite.

When you looked for a college, were there specific things that turned you off a school?

College should be all about the academics, but really, we've found that it just isn't.

For my daughter, dorms have ruined a few schools for her. Dark, dingy hallways and rooms just aren’t where she wants to spend four (okay, probably at least 2-3 before she moves off-campus) years. It makes a difference—not sure if schools realize that or not.

Another factor is, believe it or not, the food/cafeterias. We saw a school where the dining hall looked like something out of Harry Potter (and not in a good way). And another where there was one dining hall on campus--and the dorms were across campus... A definite con on her pro-con list.

Some of the smaller schools she loved—she really does like that atmosphere better (Mom, too!), but they don’t always have the academics she wants (undecided between zoology/art/languages). The bigger schools seem overwhelming. Maybe medium (like one of her brothers chose) will be just right...

Lots to think about over the next six months or so before she starts applying... Should be quite the adventure!

What drew you to your college? Was it the academics? The social factor? Were dorms and food factors for you?
Posted by Heather Blake Webber at 12:01 AM

For our son, it was all about the academics. He's a music major, with an emphasis in jazz. In our area, Cal State Long Beach was the best option. It's a huge school, but he knew a few students and almost all of the music instructors before his freshman year. He's ending his sophomore year now, and loving every minute of the experience so far.

Personally, I think the first thing is the academics...you may love a school, but if they don't have a good program in your chosen field it's not the best place for you. So, I'd start by finding schools known for those good programs and check those out first. Another thing is to email the dept. chair or a prof in the discipline she's interested in -- a former private student of mine did that and it had a lot to do with where she ended up going to school. Some profs didn't bother to answer, others she could tell from their response to her questions that it wouldn't be a good fit. I know I recommend some schools because I know they have highly regarded programs in a particular field (sorry, not "up" on zoology...lol) so perhaps looking at the academic background of well-known people in her chosen field might help your daughter with her list. My two cents! :-)

Academics and location. I am native California so my campus had to be in my home state. Food and shelter did not apply as I always supported myself and lived in my own apartment off campus and cooked for myself. I put myself through college not taking one dime from my Mom. You can get basically the same education at any college if you apply yourself. It makes no differance except for "status" to go to one or the other. These days the Bachelors degree makes no differance in the working world, Its a waste of money and time. My daughter will be going to a trade school so she can get a job right away, instead of wasting 4 years and thousands on a useless piece of paper.

For me, academics was important, but also location. My 3 schools were in Boston, western PA and upstate NY. I wanted the Boston one as my first pick because it didn't take all that long to drive home (5 hrs). Dorms and food were impt too, and just the atmophere on campus. That's the hard one...sometimes part of it is just gut feeling. I also liked that there was a ton of things to do in the area...Boston was nearby, but so were the beaches, etc. The other two schools didn't have a whole lot around them to do.

Vicki, I agree with the "gut feeling." It's just hard, like Sara said, when the gut feeling is telling you one school--but it doesn't have the major you want. It's very hard for other schools to live up to that feeling.

Also wondering, now that I think about it, if there's a gender difference to choosing. I don't remember my son caring so much about the food options! :)

Good luck in finding the right school for your daughter :)

Dorms were an important factor as our daughter narrowed her choices. She did not want to be forced into a coed dorm. She (all three of us actually) ruled out one college because of bad attitudes on the part of the student guide and students passing by during our first visit.
At the college she ended up going to, we went to a presentation on their merit scholarship program and she walked out saying "Mom, I meet ALL those criteria." So she applied for the scholarship and early admission and was accepted with the scholarship before Christmas. And was extremely happy with her choice.

A lot of it is about gut feeling and knowing with what type of school you would feel most comfortable. For me, though I grew up in the shadows of the UW, I knew I would not be comfortable or survive four years at such a large school, so both my younger sister and I looked at small private schools and found ourselves at rival colleges.

After size, academics and financial aid were the next important factors for both of us. We found that we received more financial aid scholarships/grants through our small schools than we would have received from the large state schools. Also, the school I chose at the time was strong in both fields of interest to me.

Sadly, were I looking at schools now, I doubt they would even be on my radar, though they are still a good school. Formerly known for their BA/liberal arts programs, they've shifted focus so that a lot of the students that now matriculate through there are computer/science/chem majors, or either pre-med or nursing.

For me it was a boy. There I said it. Senior year high school I dated a guy who went to the best college in our city. I had never considered applying, but he persuaded me to do so. Of course, our relationship did not endure freshman year, but ironically he never graduated but I did.

Cindy--we had a bad tour guide when we were looking at a school with son #2 (a year ago). Ruined the school for us, too. Attitude can be contagious.

Debra, I think that applies to a lot of kids! I know I applied in the area where Mr. W went, but I ended up going closer to home.

Am really hoping for some scholarships for my daughter (please oh please)! Those are definitely important. Money is always a HUGE factor.

I'm sure it will work out great in the end, but the getting there can be a little rough!

Not looking forward to our college visits...at least it's not this year for us. :)

Another thing to keep in mind- if it's a small college, what is public transpo like, if you don't have a car? And many colleges don't allow freshman to have a vehicle. For someone who has to work, that puts a crimp in their planning. Unless they chose to live off campus. Which is scary enough.

It was academics and social factor for me, but it was everything you mentioned for my husband. He also wanted a small school, but was also interested in the surrounding city. He got it all - a small, liberal arts college in a fun, dynamic city. He lived in the dorms for 3 years and enjoyed them as well. I have no idea how far the cafeteria was from the dorms (and I've been to his college for reunions, but I can't remember), but I know he really liked the food. The price tag, however, was not cheap! He did have scholarships to offset, which was nice now that we are on the other side of that. His school actually sounds like one your daughter might be interested in - have you looked at Rhodes College in Memphis?