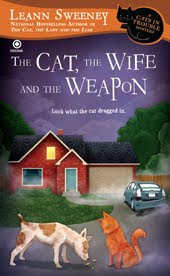 I had my book launch signing for The Cat, The Wife and The Weapon on Saturday and on my way there I witnessed something that at first felt like a disaster about to happen. My heart was pounding and I was terrified.

The road to the freeway to get to Houston and thus to Murder by the Book is almost a freeway itself. It's a four lane divided highway and though the speed limit is 45, people tend to drive a tad faster than that, myself included. Up ahead I saw something that had me put on the brakes. A tiny little dog, looked like a chihuahua puppy, came racing across the road, over the median and into oncoming traffic. He was motoring, too. Then, to my right came first a girl who looked to be about 10 and then a boy, maybe 14. They raced onto the busy road trying to catch the puppy. I was sure that dog would be dead and those kids would be hurt, too.

But what happened was absolutely wonderful. Everyone stopped. I mean everyone. And I was amazed at how many teenage boys were passengers in those cars up ahead of me. They clambered out of vehicles and the chase was on. As traffic remained at a standstill, thank goodness, they all gave chase. One guy even did a U-turn to block the little dog, and maybe slow him down. Didn't work, but so many people got out of the cars that the puppy realized going straight wasn't about to help his escape. He ran back across the highway to side I was on. Silly guy was trapped then, when he ran up to a door at a store in a strip center.

He was soon surrounded and gathered up by the children who would have been devastated had he been crushed by a 2,000 pound automobile.

I hummed and smiled all the way as I made the hour long drive into Houston. What a good feeling to see people come together to help in a little crisis--and protect both the dog and those kids who were afraid to lose him. Bravo, people of Friendswood! What a great thing to witness. 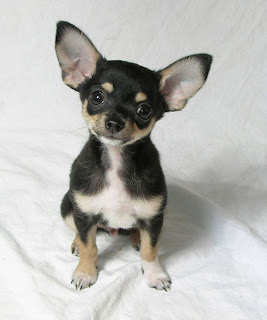 I so love to see the better side of human nature. Volunteering at the county animal shelter, we see far too much of the bad side. I treasure events like this that reinforce that there are a LOT of really good people in the world - it's just that the bad ones tend to stand out. Bravo to all those who tried to help this puppy and his kids, and thanks for sharing.

O Leann, that is a great story! So lucky that all those people stopped in time.

What a beautiful story. Glad it all worked out.

Thanks everyone. It still makes me smile today as I think about. There are moments in life that are meant to be treasured and given a special spot in the memory bank.

What a cute little dog. Glad he was saved. Love the cover and title of your cat cozy.

I am glad he was saved, too. Wish I could run after him myself, but I am not quite in shape for that. Leave it to the teenagers! They did great!

What a beautiful story for Easter Sunday! I'm so glad everyone made it through without getting hurt, including the innocent little dog who started it all.

Lovely story. The Chihuahua in the picture looks like Snoopy, the Chihuahua we had when I was about ten years old. So adorable!

What a wonderful story. It IS good to see that things like this do still happen.

On a Day of Resurrection, you have shared a wonderful story of someone being saved from death.

And I personally thank you. It is always nice to have the good in humanity illustrated. We all can certainly use a reminder that people are good. And wanting to save an animal is a fine illustration of the goodness.

Leann, thank you so very much for sharing your story.

Thanks everyone. It is a wonderful story. No honking, no people pulling around stopped cars to rush to wherever they were going. Just folks doing the right thing. We need more of this!!

Thank you for sharing this story. What a wonderful thing to witness. Everyone helping out, avoiding a tragedy.

GREAT story! I'm so glad everything turned out all right for dog and kids!

So am I!! Thanks for reading the little essay! That wasn't what I had planned to write for Easter, but it was kind of a "savior" story so it seemed appropriate.