While our wonderful Kate Collins finishes the last part of writing her manuscript--rewrites, copy edits and even more edits--we are fortunate to have Julie Hyzy, who writes two cozy series, join us for a few weeks. Many of you are probably familiar with her White House Chef series as well as her Manor House Mysteries. We welcome Julie while we await Kate's return. (We do miss our Kate!)
++++++++++++++++++ 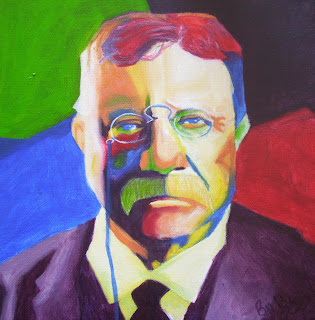 I'm a White House geek. But you already know that. What's fun, is that there's a new show about the presidents that's out there - one I was fortunate to see. Let me tell you about it.

Our youngest daughter, Biz (short for Elizabeth), has always loved being on stage and with few exceptions, every one of the productions she's been part of have been excellent. Her most recent performance involved being part of an ensemble cast in 44 Plays for 44 Presidents.

Because I thoroughly enjoy anything having to do with U.S. presidents and stories involving the White House I was very excited when she told us she'd landed a part -- actually, many parts. There were nine actors in the cast and they were amazing - jumping from role to role while moving props and delivering powerful lines. It wasn't just a play, it was choreography at its best.

The show was wonderful. Each president's story is presented in brief -- some scenes are hilarious, others heartbreaking. This is a high-energy-chock-full-of-fascinating-trivia production. I learned a lot, and even better, I began to question what I thought I knew. I'm doing more in-depth research into the presidents' lives than I'd done before, and that's a good thing, both for my books and for myself, personally.

Why am I telling you this? Because 44 Plays for 44 Presidents is part of a yearlong festival. The goal is to present the play 44 times in 2012 culminating in an election-night composite video production featuring one scene from each of the performances. It sounds like fun, doesn't it? Take a look at the website link. It's possible - if you live in the United States - that a production will come to a theater near you. I can't recommend it highly enough and I hope that if you're lucky enough to catch a performance, you'll let me know.

Btw: in order to generate interest in the production, my daughter helped organize an effort to have all presidents' portraits done by burgeoning artists in the college's community. The portrait of Teddy Roosevelt above it the one Biz contributed to the collection. She said she used vibrant colors because of Teddy's vivacious spirit and love of life.

Here's a link to the show's Facebook page. As of this writing (it may change), Biz is in the banner picture, on the far right with her arm in the air.

At a mystery conference earlier this year, we got to talking about being involved in theater as kids (and sometimes as adults). From what we could tell, a very high percentage of mystery writers and readers had taken to the stage at some point. Did you ever participate in school productions? Community theater? Professional productions?

Julie, that is so cool! Are all your kids talented artists?

I've never done the theater thing, though I can be quite dramatic. ;)

My daughter loves it though. Not quite sure where she gets that from.

I wish I could go! Sounds like so much fun. Off to visit the links!

Julie, I did in elementary school and junior high. I remember one was on the Pilgrims--I don't remember the rest. In junior high, it was mostly chorus concerts.

Heather - Good memory! My eldest, Robyn, is an illustrator and Biz has picked up the artistic talent too. Sara, in the middle, isn't drawn into that world the way her sisters have been, but she has many other wonderful talents.

Leann - it's a great show. Very moving, and often in unexpected ways. Hope you can see it.

Kristin - I tended to be a background person except for one notable role as the murderer (woo-hoo!!) in high school and as the Wicked Witch of the West in community theater as an adult. THAT was fun!

Congrats for your daughter Julie, she sounds like a very nice person. And thank you again for the bookmarks you send me!
I have never been in a school play or such, but I don't believe we had those things at my schools. Perhaps that is why I am a reader, not a writer ;)

Very happy to send you bookmarks, Aurian! And thank you for your kind words about my daughter. She is a really nice person. We're quite proud of her, as I'm sure you can tell