While our wonderful Kate Collins finishes the last part of writing her manuscript--rewrites, copy edits and even more edits--we are fortunate to have Julie Hyzy, who writes two cozy series, join us for a few weeks. Many of you are probably familiar with her White House Chef series as well as her Manor House Mysteries. We welcome Julie while we await Kate's return. (We do miss our Kate!)

We went skiing the weekend before last. Friends invited us to join them, we had nothing planned, and snow was predicted. What more could you ask for? Well...the snow never materialized and – for the record – I’m not complaining. We’ve had a fabulous winter this year and I’d be thrilled if they were all this mild.
But…when I took a look at those giant hills (they were giant to me, okay?) and I realized that the teensy cover of manufactured snow the resort had shot onto the slopes probably wasn’t going to mitigate the ice factor, I got cold feet. (Literally, ha ha – I was standing in snow.) My husband, compassionate fellow that he is, suggested cross-country skiing instead.
The day was gorgeous—sunny and crisp. The people at the lodge were friendly and helpful, warning us that we were overdressed and that we’d probably overheat and be back in fifteen minutes to shed clothing. I’m always cold, so we decided to keep the ski pants and jackets on, along with our hats, scarves, and mittens. 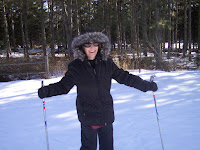 Here we are, about a hundred feet away from the starting point, when we realized we’d left the paper trail map with our belongings back at the lodge. “No worries,” said one of the veteran skiers, “the trails are well marked.”
Uh-huh.
Did you ever see “The Princess Bride”?
Then you will hear this next sentence in Inigo Montoya’s voice: “I do not think ‘well-marked trails’ means what you think it means.”
Couple things I didn’t know about cross-country skiing. There are grooves on the very edge of the trails to help keep newbies on the straight and narrow. Thank goodness they were there. I don’t think we would have lasted five minutes otherwise. Ice coated everything and I could barely keep vertical.
The beauty of cross-country is the quiet. We were able to converse when we weren’t panting, and we enjoyed the solitude with only the occasional expert whizzing by, saying hello. As promised, there were maps at every juncture…but they weren’t in color the way the paper map was. That may not seem like a big deal, but there are loops everywhere at this place and we couldn’t figure out where A ended and D began, or where E ended and G began. We thought we were on D, but we were really on G. It got most confusing when E and G met, but neither went the way we wanted, and the path behind us—unmarked—didn’t even appear on the map. There were different difficulty levels and after trying one “more difficult” (puff, puff, gasp) we knew we needed to stay on “easiest.”
Except…some of the trails are one way only, with giant DO NOT ENTER signs. Which means you can’t backtrack. When we got to K we knew we were in trouble. Somehow we managed to find an “easiest” path back, via N. And don’t let anyone tell you there’s no downhill in cross-country. We took plenty of tumbles. Plenty. Sometimes even while still in our handy-dandy grooves. 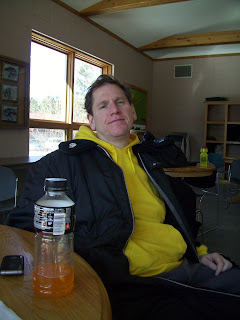 When we finally got back, sweaty, tired, but ultimately proud of ourselves, the folks in the lodge commented on how far out we’d gone. "All the way out to K, huh?" one said. “How do you know?” we asked. Turns out that we weren’t as alone as we’d thought. Several of the staffers told us that they’d gotten regular reports of our whereabouts. We’d gone out much farther than anyone had expected. I think the fact that we were doing the equivalent of shuffling rather than skiing put giant neon signs over our heads flashing “Newbies!” But it was nice to know that people were watching out for us.
BTW - this is my husband's "after" picture. I refused to let him take one of me. I looked MUCH worse (:::shudder:::).
We learned a lot that day. Enjoyed ourselves immensely and felt good about the amount of exercise we’d gotten. Would we do it again? Probably. My husband and I agree that we wouldn’t go out of our way to find cross-country opportunities here at home, but if we’re out and it’s available, we’d be willing to give it another whirl.
As always, I made mental notes (my hands were too sweaty to jot real ones) about the experience so that I could use it someday for one of my characters. Maybe I'll have it snow in North Carolina and Grace can traverse the white stuff and happen upon a murder victim. Or a murder in progress. She'd have to be a better skier to get away safely ... but it sure would be hard to be worse than we were.
What about you? Have you ever skied cross-country? Other than making sure we have a detailed map handy, do you have any hints for our next trek?
Posted by Julie Hyzy at 12:15 AM

Living in So. Bend, I think snow is beautiful if I can stand inside and look at it. No cross country for this old man.

You could have a nor'easter come up the coast and hit D.C. Ollie could ski to work and if needed, I'm sure my Chef DT would bring her a little keg of Brandy. LOL

Skied once and undone by grass patch on tow. Never again! Better to be inside, by fire, reading your books.

I love skiing. I did the Birkibeiner (world-class race) up in Cable WI three times....by that I mean I stood at the end to hand out medals to the real athletes. LOL It's a great sport.

I've only downhill skied, but I've often wanted to try cross-country skiing. Is it weird that your adventure makes me want to try it even more?

On a separate note, I'm super excited to see you here! I just finished _Affairs of Steak_ about a week ago, and I really loved it!

Hi, Fred! I know Ollie would appreciate DT's efforts, for sure! LOL

Ouch, Liz! Sorry to hear that. My first time on a tow rope was not a happy moment either. We saw a new sort of tow this time. Looked like one of those airport moving walkways, except it ran uphill. We didn't try it, of course, because that would have meant coming back down!

Hey, Jeanne! I bet you wouldn't have been handing out medals if you weren't a pretty awesome skier yourself!

Min - Not at all. Really, the experience was great and I'd give it another try. I think you'd enjoy it. It's way less stressful than downhill, for sure.
Thanks for your kind words about Affairs of Steak!

Nothing snow related for me. I applaud your adventurous spirit, though!

I went skiing once and I got an award for falling down safely.

I've never skied but it's on my bucket list. Hello, bunny hill! I went snow-shoeing for the first time a couple of years ago and had an absolute blast, even though it was one of the more exhausting things I've ever done. It's harder than it looks!

Glad you're here with us, Julie!

Hi Julie! I love the look on your husband's face. I hope you headed for a seat by a nice fire and had something a little more warming than that juice! I snowshoed once to a yurt in Utah.( I think it was 10 yards) My family applauded when I got there. Does that give you a sense of how little I do that involves snow? Thanks for the great story and we all are hoping Kate will be back soon, too.