by Heather Webber / Heather Blake
My husband always jokes that people never seem impressed with his job, yet whenever he mentions what I do, they perk up and ask tons of questions.
It’s an interesting profession, writing.
Yet, it’s often a lonely profession. A writer, a computer. Hours on end of blocking out real people so we can focus on imaginary ones. 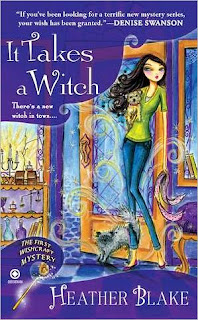 But there are times when writers emerge from their fake worlds to interact in the real one. To interact with real people. Other authors, readers. Facebook is great for this. So is this blog and other writers’ blogs. Twitter.
A strange thing happens with all that interaction, though. People who are strangers slowly become friends.
And the writing profession isn’t nearly as lonely as it used to be. Not when talking to friends is just a click away.
Lots of friends.
I didn’t know quite how many until this week, with the launch of my new series with It Takes a Witch (also the launch of my new pen name, Heather Blake).
To say I’m humbled by all the posts, emails, tweets, reviews...is an understatement. I’m beyond humbled. Beyond grateful for all the support. So grateful that I feel like I’ve said “thank you” a thousand times this week—if not more—yet it doesn’t feel like it’s enough. Sometimes, even a writer is at a loss for words.
THANK YOU, everyone. Truly. A friend of mine often says, “Feel the love.” I’m feeling the love. I hope you’re feeling it, too.
Posted by Heather Blake Webber at 12:02 AM

This brought tears to my eyes that you know how very special you are to all of us!

I look forward to reading your new book.

I had tears when I wrote it, Aimee. (Have I ever mentioned what a SAP I am?)

Thank you, Annette! (See, there I go again.) I hope you love it.

Its nice to have a connection with a favorite author...all the years I have read, authors were just a name on a book under the title...You have made it possible to get to kind of know the person who wrote all those wonderful words in those special books you love...So thank you Heather.
Love all that you write and you can be "Webber" or "Blake" or whoever...Noreen F.

What a beautiful post, Heather. One of the many things I love about the cozy mystery family is being able to become friends with our favorite authors. Thank goodness the Internet brought us all together!!!

And all the reviews, etc are well deserved...It Takes a Witch is incredible!!!

see? All these wonderful people now know what I've known since 1984. You. Are. Fabulous.

I really enjoyed this book and look forward to reading the next one.

for sharing yourself with us by the words you write and by the smile I get when I finish your book which are awesome! You are truly special.

my dear, you've already accomplished more in 3 decades than most of us could dream of doing in a lifetime. i really hope this new series hits it out of the proverbial park for you. NYT BEST SELLER! :> i see it in your future...

Congrats on the new book, Heather. You know I love your stories and I'm so thrilled to have a new one to read.

I hope this one is your best seller yet. You so deserve it. That first time we met at the RWA book signing, you took the time to encourage me (a complete stranger!) and offer advice. I've never forgotten that.

I think being able to talk this way helps a lot of readers to understand what goes into writing a book and that the author doesn't always have total control over their own works. I know I love talking to all of you and I can't imagine going back to pre-internet. I would have been too intimidated to write a snail mail letter to any of you then and I cringe when I think of all that I would have missed.

Thanks, everyone! I love how the internet allows me (a true homebody) to get to know so many. Proud to count all of you as friends.

I'll have to check out your series! Love the post..you are right about how people you didn't know are suddenly there for you!

Aww - this post brings a tear to my eye. I so adore your Lucy Valentine series and immediately bought your new book the other day when it came out. I plan to read it this month and am certain i will love it. :)

Thank you for letting us into your world and for sharing with us :)

Congrats on your new book. I've enjoyed getting to know you and getting to read your wonderful stories. Looking forward to continuting to do so throughout 2012!

I have read a few great reviews of the new book already, can't wait till it falls into my hands.

It is us who are thankful, Heather. You have provided us with your wonderful books that always deliver. Now if BN would get me my darn book that I pre ordered all will be well! We love you!
PattyBrennanBosko from Facebook!

Heather,
I have read all the Nina Quinn's and all of the Lucy Valentine's and just bought <"It Takes a Witch"> for my nook. The kettle is on the kids are sleepy and I am looking forward to a nice cozy read!

I'm happy that you're starting a new series. being the irregular blog lurker that I am (irregular in the blog reading sense, lol) I wouldn't have even known that you this was coming out, but happily I received a little notice in the mail about it. Looks interesting, with a touch of magic to it. My kind of mystery - especially since I mainly read urban fantasy. :) So congrats on your hard work and good luck with sales. As soon as I can, I'm buying a copy! :)