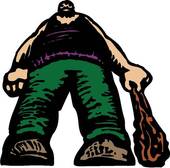 Think back to all those childhood fairy tales that had giants in them. Were the giants ever good guys?

“Hello, Comcast? I have a question about my statement, namely, why isn’t it being sent to my home address. See, it used to go to my husband’s office, but I had to switch it a few months back, and obviously someone on your end didn’t change it in the system. Can you help me? You can? You’ve taken care of it already? How easy was that! Thank you, have a great day.”

Just kidding. Only thing real about that conversation is the problem.

For the first time ever, I got a collection notice! Apparently I wasn’t paying my bill, because apparently it wasn’t coming to my home address because APPARENTLY, when I called a few months ago to clear up the problem, they didn’t fix it. So who paid a penalty? Me.

So then I tried to correct the address problem. First I called Comcast’s 800 number, then I sat through an endless selection of menu items, laboriously inputted the account information, phone number, address, etc., and was finally redirected to what was promised as an agent who could help me.

This happened three times on Monday and twice on Tuesday. When it happened again on Wednesday, I gave up, logged onto the ‘net, and went to the Comcast support site. First I tried the live chat help. Inputted the info all over again and waited. The little spinner just kept on spinning….. for half an hour. I tried again. Same thing. So I tried the link for email support. It took me back to the live chat page.

Talk about frustrating! I wanted to beat my head against a wall. I couldn’t reach a person on the phone and I couldn’t even send anyone an email. At that point, I was ready to cancel my Comcast subscription entirely. And then, suddenly, on the third try, the live chat went through and a very nice person named Marnella (at least I assume it was a person) asked the right questions, got my info, and fixed the problem.  Fingers crossed.

Comcast is a behemoth. It is simply too big to care about its individual customers. Had I selected the menu option to cancel my account, I have a feeling I would have reached a person immediately.

Maybe next time, I’ll try that. And then I really will cancel, because I’ve had it.

Have you had similar experiences with a Goliath in your neighborhood? Slingshots, anyone?
Posted by Kate Collins at 12:00 AM

Last month one of my credit card companies decided that I was a preferred customer.

My reward for being a preferred customer? A new credit card with a new number - so I have to change the number everywhere it's registered.

They didn't ask us if I wanted the card (I'd called because my card didn't always swipe and I was promised a new card with the same number) but if I didn't activate it, my old card will stop working and I'd lose all the points I've accumulated.

I get double points on purchases from the company's grocery stores...but I already had that bonus on my old card.

Now one of my other cards is my primary card and I'll get points towards free movies.

And there's another behemoth! I hope our trend toward going local will push us into the direction of local banks, as well. I like knowing my banker personally. Elaine, I feel your frustration.

My cable company was bought by another company. I've had more problems in the last month then the last 7 years. I cancelled them, went with Dish, saved 80.00 per month and haven't had a problem. There is no such thing as customer service anymore.

Verizon and DishNetwork. We had the Verizon bundle but the internet part of it rarely worked for a week at a time. Boy was it fun to cancel them.
Dishnetwork refused to carry local baseball here in the Bronx so we broke up too. My DirecTV dvr broke,the NEXT DAY I had a new one. That's how to run a company.

Kate, I've always enjoyed your books as well as your feisty spirit.

Someone has to speak up for us!

We've been on DishNetwork because they were the only game in town for years, since, oh, before the O.J. Trial. Believe me, it's not all a bed of roses with them, either! Sometimes I just let my husband, the more diplomatic of us, take care of complaints, so my blood pressure doesn't boil over!

I have no idea what Comcast is, but I sure do understand your complaints.

What a mess! I totally feel for your frustration and also get so upset when I am in the same situation. Working myself silly trying to fix something I was told was already fixed. Making call after call...again...sending email after email...again. I am crossing my fingers that it worked this time. You are totally right with your thought that threatening to cancel your service would've gotten someone to talk to you. That is a surefire way to get service (and my experiences, usually a discount, too!).

I'd like a slingshot at the old post office. I LOVE their Priority Mail Flat Rate shipping. I use it regularly and it saves me tons of time. However, last week when I went to print off a shipping label at home it wasn't printing and timed out saying an error had occurred with my check-out. Hmm.. tried again and the same thing happened. Tried with a different card...twice. Then figured it was best to try again in the morning. Well, you guessed it - all five transactions posted on my cards although I only printed (and used) one label. I am now awaiting refunds on the other transactions and hope they come through without me having to follow-up. Fingers crossed.

Kristin, I wonder if the change in Post Office service had anything to do with the mix up. At any rate, it's another example of inefficiency in huge businesses.
Aurian, I should have clarified. Comcast is a cable TV/phone/internet conglomerate that took over a bunch of smaller companies. They are nationwide in the States.
Jenn, Debra, and Lynn, you affirmed my suspicions that it's just big business in general. I battled that with American Airlines, American Express, etc. after my husband died. All we can do is complain loudly with our wallets and words. Thank goodness for the internet!

And this is why Comcast is not so affectionately known in my household as "Comcrap".