Does Santa diet during the holidays? 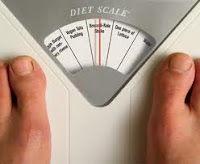 Whoever heard of dieting during the holiday season?  Well, that's what my new doctor wants me to do. Mind you, I've already lost 20 pounds in 2011, but I hit the wall and plateaued in June. She wants me to lose another 20 pounds.

I lost those 20 pounds eating a LOT of ice burg lettuce lunches. After five months of those monotonous meals, I had to eat something else before I went completely bonkers. So ... I went back to REAL food.  I had a wonderful summer of tuna, chicken salad, or ham sandwiches, and while I went up and down three pounds (that olive oil mayo is almost half the calories of regular mayonnaise and it tastes delish), it was never any more than that. Right now I'm actually at T minus 21 pounds ... and why?  Because I started eating salads once again.  I figure I can probably eat them for another four or five months before I get absolutely sick of them again.  (Tossing in a hard boiled egg at least gives me some protein without a lot of extra calories or fat.  Yum-yum!  I love hard boiled eggs.) 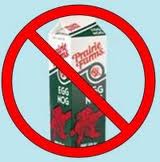 But let's get back to this holiday time.  As I mentioned a few weeks ago, this is the time of year when you get food you don't get any other time of year.   I have successfully resisted all the stuff in the stores.  No candy.  No cut-out cookies, no cake.  No eggnog.  (This must be the first year since I was about four that I haven't had ANY eggnog!)

But I've got a hankering for three things, and two of them have chocolate in/on them.  Chocolate covered pretzel rods with jimmies.  Homemade toffee with chocolate and chopped walnuts.  Homemade pumpkin bread.  (Which I thought about making at Thanksgiving, but never got around to doing.) 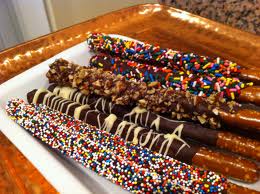 All week I have been resisting the urge to bake or melt chocolate for something. (It helps if you're missing the vital ingredient for each recipe.) But that urge is growing stronger every day.

I have to go to back to the doctor next week and she's expecting to see a weight loss and I intend to deliver.  But then what?  How long can you cheat on your diet and how bad will the consequences be?  Can you cheat for a few days and then go back to being good?  Should I only cheat on Christmas Eve and Christmas day?  And what about all the leftovers?

I think the answer might involve the chest freezer out in my garage. Make the stuff, put it in single-serving containers ... and then dole it out slowly (like a once a week treat) over the course of the next 10-11 months.  (Will chocolate covered toffee last that long?) 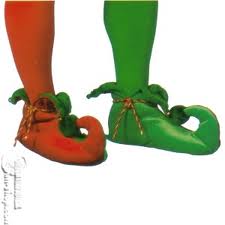 What would you do in my shoes?
Posted by Unknown at 12:19 AM

I know your predicament well as I'm in the same boat. My plan is to be good between now and Christmas and allow myself the week of Christmas to enjoy the holiday fare in moderation and then back to the food control.

I am fighting the good fight too and am open to suggestions. My son is a college athlete and he said, you have to give your self one day per week when you are allowed a reasonable "cheat". I am doing that and I really look forward to my eggplant parmesan hero on fridays. He also says more working out is better for you than less calories.

My doctor gave me a mandate in the beginning of the year lose weight..I have stopped and started all year...During the holidays my family cooks lots of great foods...
1.I usually eat at home before I go to parites so I am full when I arrive
2.I make my own veggie trays for home and eat on them all day & night...I make them pretty
3. I take small sandwich baggies and fill them with holiday snacks once I eat them that's it.
4. I allow one day for pigging out...

I just cannot go without my favorite foods anymore, so I'm having them occasionally. However, my doctor (tiny Tim) insists I must lose so I got an exercise bike and I'm riding those calories away. It's actually working.

Well, If you'd really like to know what Santa does, just visit www.TheSantaDiet.com. The Santa Diet is a complete diet for physical, emotional, and spiritual health by Santa Claus, M.A. Christmas Blessings to all! Santa :-)}

I give up for 2011 - will start again on January 1 with everyone else. Good luck.
Ann

I just read an article on msnbc.com that dieting two days a week, where you eat only 650 calories and then returning to a normal diet for 5 days a week (where you don't go overboard, just eat healthy, normal meals)is actually more effective for women who want to lose weight than those who stay on a low calorie diet, say 1200-1500 calories, for months on end. It doesn't allow for the "plateau effect" because your body doesn't get the chance to believe you are starving yourself. Worth a try!

I am trying/going to try the 17 Day Diet... There are four different cycles, and the maintenance cycle allows for 3 cheats on the weekends. Fingers crossed (once all of the cookies leave the house!)

It's difficult, though, during the holidays, when the kids come home from college! But I will do the best that I can and will be cheering you along from this side!

I feel your pain. I've lost 23 pounds since January. Hit a few plateaues myself. Tried cutting portion size at dinner and eating small during the day but have to eat more than most diets because of migraines. Danced with Wii. I've got 7 more to go to lose all I gained on Meds, still on meds but fighting the fight of over 40, meds, worsening inactivity due to problems with cp and worst of all, I LOVE GOOD FOOD! especially at the holidays. Our baking begins next week. Now at least I know I'm not alone!!

Very difficult, what ever you do choose, do enjoy the season as well! I think passing over everything, and be good, does not really put you in a good mood either.