I love Christmas music and have quite a few CDs.  Yesterday I found myself going through them and sorting them into categories.  Okay, which ones are "safe" to start playing.  The instrumentals, yes.  But which ones?  I have so many, and quite a few of them are similar. 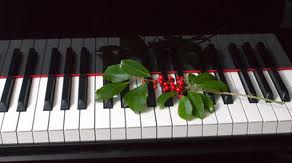 I have a thing for piano Christmas music played in the background.  Just nice, quiet music that isn't overpowering.  So while I was working on the day's word quota (which actually involves decorating for Christmas, so playing Christmas tunes did help to get me in the mood) I had on the first of the piano CDs.  But instead of being in the background I kept noticing how sad, really morose, this piano music was.  Thank goodness I didn't spend a lot on that CD, because it's going back in the drawer.

All of this did not go unnoticed by Mr. L, who is of the opinion that Christmas music should be played ON CHRISTMAS DAY ONLY.  That could be because we have at least one local radio station (the only one he listens to in the car) that plays ONLY Christmas music from Thanksgiving until New Years.  And they don't seem to have as big a Christmas music selection as I have. 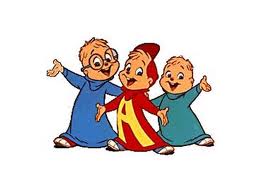 The poor man is terrified that for weeks on end he'll be subjected to Dominic the Donkey, I've got a Hippopotamus For Christmas, and maybe worst of all The Chipmunks.  ::Shudder::

Well, isn't my piano music far more preferable than THAT?

What's the first thing you do to get into the holiday season?
Posted by Unknown at 3:37 AM

i get into the holiday spirit by playing christmas music, but prefer to hear it after thanksgiving

O I do love my Christmas music as well! I also listen to an online radio station. They have a few streams: the one you can also hear on the radio, which also has commercials and the news every half hour. On the pc I listen to Loveradio, all love songs and no talking or commercials or the news. Love that as a background for my reading. They also have only Dutch music, bleh. And when Christmas is arriving, Christmas radio. As soon as that possibility arrives, I listen to it. But my boyfriend hates it.
And I do hate one particular (Dutch) song. As soon as I hear the opening notes I hit the mute button.

Besides a little early shopping, baking is usually my first move in to the Christmas season. I like to make Emeril Lagasse's Creole Fruitcake and it takes a long time for it to ferment, so I always start it in November.

I play my Christmas music which puts me in the mood to do some holiday shopping.

Shh! Don't tell anyone: I keep a few Christmas favorites on my iPod year round. What a comfort on down days -- and great to fall asleep to. :)

Our local station starts playing Christmas music in mid-Nov (the opening day of deer season, to be exact) to get shoppers in the holiday mood. I don't mind at all because I love Christmas music (except for that annoying Dominic the Donkey).

I just bought more!! LOL. I'm so trying to get in the mood. This Christmas will be esp. hard since I lot my husband on 7/11/11. So, I'm trying to get into the spirit for my kids! Bought a nativity yesterday also!

Anonymous, I'm so sorry to hear of your loss. This will be a hard holiday for you (heck, all your firsts will be hard in the coming months). May you and your children find some joy in the upcoming holiday season by holding on to your traditions and keeping the flame of memories alive.

My condolences to Anonymous and her children.

I'm the only one who likes Christmas music in our household. Now that you've mentioned it I want to listen to a few old favorites. What I have done so far is read a couple of Christmas themed books. One of them is Deb Baker's latest Yooper/Gertie Johnson book, Murder Trims the Tree. I also have A Wee Christmas Homicide by Kaitlyn Dunnett on my Nook.

Writing out our Christmas Menu really gets me in the holiday spirit. We have the same thing every year so there is really no need to write it out but it is an amazing meal I look forward to all year. My husband roasts a duck, and every year we buy a bigger one in the vain hope of leftovers but my son manages to eat all of it on Christmas Day.
This year I am going to make my first souffle for dessert.
I do like to listen to Christmasy audiobooks while I am cooking.

Anytime AFTER thanksging, I'll start listening to the "Nutcracker". So meny memories of watching it on tv, christmas eve, with my ma and grandma.

I love my Christmas CDs. But I agree, too soon makes me nervous because I start thinking about all the gifts I need to buy. And wrap. And pack. And ship. Everything needs to be shipped, so there-in lies the problem. Sigh. I'm not READY!

Ahem, that's "I Want a Hippopotamus For Christmas," a favorite of mine and my niece--much to her mother's dismay. *G*

We have two stations in our area that go to the all-Christmas format the week of Thanksgiving. Thankfully, each plays a bit of a different mix, and I like turning it on for soft background music while reading or working at the computer.

Being a crafter, I'm working on Christmas projects throughout the year, especially come fall when it's time to make Christmas cards. Speaking of, the calendar is telling me I really need to get going and those finished.

I've been known to play Christmas music anytime the mood strikes- but especially on June 25, Noel Day. What's Noel Day you ask?? Exactly 6 months til Christmas. Shouldn't that be a holiday too??

I shop year round, I'm redneck enough I don't take the lights down around the house- to much of a pain, and I've been shopping for new things for the yard. And don't get me going on the Hallmark ornaments- they come out in July or August.

We play Christmas music early here, too. I'd prefer September, but mom always complained that was too early. That is until this year when she said the other day that maybe we should start in September. *sigh*.

The other thing we do is we watch "Nestor the Long-Eared Christmas Donkey" EVERY Thanksgiving after we eat dinner. It's my favorite Christmas special and the only tradition I love and insist on keeping. I even got it for my nephew for his first Christmas and started watching it with them. I just wish that there was a Nestor stuffed animal or figurine. They have replicas of all the other characters from those 70's specials. Why not Nestor? Sure, leave out the best.

We start the day after Thanksgiving and buy our tree. DH gets into the crawlspace and brings out the containers of decorations. He puts on the Christmas music, either the CDs I've collected over the years or on SIRIUS/XM on our television. And we drink egg nog or wine and decorate the house. Then we decorate the tree once the limbs have settled.
Then Lady K starts gathering the cuddly decorations and putting them in her room. And starts counting the packages under the tree. And asking when she can open just one, pretty please.