Okay, I'm about to go "on the road again." This Thursday, October 13th, I fly off for my old hometown, Washington, DC, for a two and a half week visit. I plan to be working and writing on the second in the Molly Malone Mystery series while I'm there, so I'll be in the City all week both weeks. However, on the weekends, I plan to play---both with family and with friends. I'll keep you all posted through this blog and let you know what I've been up to.

This coming weekend, I'll be joining my oldest daughter Christine and family for a Family Adventure. Even daughter Melissa will be traveling from Manhattan to arrive Friday evening so she can join in the fun. What are we planning to do? Well, first. . .we'll head to Lake Braddock High School Homecoming football game Friday evening. And then. . .after all the sane fans and parents have headed home, we will all load ourselves on board a 35-foot RV that Christine and hubby Tim rented for the weekend and drive off into the night.

We're heading on a 4-hour trip north from Fairfax, VA (Northern Virginia) into central Pennsylvania to State College, PA, home of Penn State University to attend Saturday's Penn State game with fellow Big Ten rival, Purdue University. It's Penn State's Homecoming weekend, so the normally fanatic Penn State fans will have more than usual to celebrate. It should be fun.

I have several friends who are Penn State fans, and I have to admit, they are certifiably fantatic about Penn State. :) Our own Cozy Chick, Jennifer Stanley, aka Ellery Adams, for instance. Our family, however, has lots of ties to Purdue. Our family lived in West Lafayette, IN for fifteen years since my husband was a professor at that wonderful university. Lots and lots of good memories from Purdue as well as old and dear friends. And--daughter Christine and son-in-law Tim are also graduates of Purdue. Those ties run deep.
So, we really should root for Purdue most of the time. But. . we should also root for Penn State, considering that grandson Joseph attends and grandson Matthew is a freshman, having received a Full Scholarship in Football as a Wide Receiver. Now, Matthew as well as a lot of other freshmen have been red-shirted this year, so he won't be playing, but he'll be on the field with his team. So----I guess we'll root half the game for Penn State and the other half for Purdue. This could get confusing. 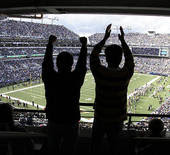 Meanwhile, I'm looking forward to experiencing this "RV Adventure." I'm told Penn State has large parking lots for RVs, so I'm picturing a forest of people and RVs and tailgate parties. Wow. This could be a LOT of fun. :) If you're planning to go to the Penn State/Purdue football game this weekend, drop by the RV lot and say "hi." I'll make sure to post my location on Facebook.
It should be a perfect Fall football day---50s--60s and hopefully sunny. I'll keep my fingers crossed and my rain jacket close by. Anybody going to the game? How about a game near you?
Posted by Maggie Sefton at 12:13 AM

The RV adventures sounds like go. What does "red-shirted" mean?

The Big Ten has had mixed loyalties in my family as well. In the late 70s/early 80s, among my cousins we represented 7 of the Big Ten schools. The real winner was my grandmother since there were always roses on her Thanksgiving table from some gloating college student!

Too bad you weren't at Penn State last Sat. The weather was glorious if a bit too warm for football. Hope you have a great time on this trip. We're going to be in D.C. in early Dec.

Dru---Those young players that are red-shirted means they do not play that year at all. And---they actually get another year of eligibility. This is actually good for freshmen because they get a year to settle into classes and learn the routine, plus they gain another year to "grow" and put more meat on those bones. :) Matthrew is 6'4" and 190 lbs and wicked fast. But more meat on those bones will be a good thing. The much bigger linemen will be waiting to pounce on that fast rabbit next year.

sosarahsew----Love that story. Your grandmother was a lucky woman. I'm curious. . .where did your blogger name come from?

Barbara---I just learned that my daughter & family were there at the game last Saturday and she said how HOT it was in the stands even though temps were only in 70s. I'll be sure to bring plenty of sunscreen. Are you a Penn State alum?

No, not a Penn State alum but I live in PA and I'm surrounded by them. Our neighbors went to the game last Sat. Actually I graduated from Rutgers - bitter rival of Penn State - and now we have a team to be proud of too.