I Still Want to Marry McCartney 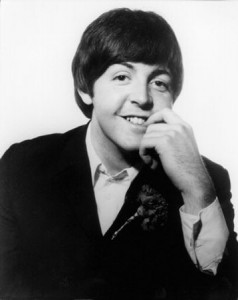 With reports that Paul McCartney was to marry this weekend--probably already has--I was reminded with a pang how very much I wanted to be his bride many many moons ago. Me and about a gazillion other girls. He was my one and only teenage heart throb celebrity. But here's a twist. I never admitted it. Instead, since one of my best friends adored Paul, too, I decided to say George was my favorite. I felt like I'd be betraying her. Yeah, like either of us had a chance at a Beatle. What dreamers we were!

My love for him began early in my teenage years when my British pen pal told me all about the group. I remember my heart pounding when I saw the Beatles on the Ed Sullivan Show. I didn't cry, but I think, if I could have scored tickets for a live performance, I would have cried. Never did see them in person, though I did see The Dave Clark Five (accompanied by my friend and both our mothers--not so great) as well as The Rolling Stones. I was older when I saw Jagger and crew and went just with friends. Great show and he threw a calf skin jacket to a lucky girl in the crowd. 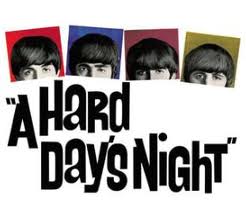 I have a great memento of my Beatle love. The Niagara Falls Gazette took a picture of the "queue" to get into the first Beatles movie, Hard Days Night. It made the front page. Pretty good picture and I am quite recognizable. I loved that movie and the insight it gave me into the Beatles sense of humor made my adoration even greater. For me, it was Paul all along, a secret I kept--which actually made my puppy love all the crazier. Bit of irony attached. The girl friend I didn't want to "betray" by liking Paul since she declared her "love" for him first? When we were in high school, she stole my real-life boyfriend. How's that for loyalty?

What about you? Were you or are you a Beatles fan? If so, who was your favorite?
Posted by Leann Sweeney at 12:01 AM

My absolute favorite was George, always kept a special place in my heart for him. I watched the HBO special about him this week, Living in the Material World, it was great. I was lucky enough to see them live both times they were in Texas, then saw George in '76 on his solo tour as well as Ringo in the 90's and all but one of Paul's. I had 3 good friends who loved them also, 2 liked Paul, one loved John but he was married so she took Ringo, (lol) As the song by Mary Hopkins says "Those were the days my friend" Can't believe you wouldn't betray your friend, but she didn't have the same loyalty to you. Thanks for taking me down memory lane.

P.S Just saw the time and date and realized it is John's birthday. Happy Birthday John!

I grew into my love for the Beatles and adore them now. My daughter (16) has loved them for years. Once, a couple of years ago, she was wearing one of her fave Beatles' t-shirts when an older woman came up to her and asked her if she even knew who they were -- and was *shocked* she did. Daughter was quite offended. LOL.

I am a HUGE fan of the Beatles, despite being too young to have enjoyed the band while they were still all alive and together (I was 3 when John Lennon died). I own all the Beatles movies, mostly because as a teen I got huge crushes on John and Paul after seeing A Hard Day's Night. And I actually really loved Help! because it really showcased Ringo's acting skills. My very first online "identity" was (and still is on some sites) Rigby9091- Rigby for Eleanor Rigby, a Paul song, and 9091 for The One After 909, a John song. I'm a little sad at Paul's marriage too, but honestly, no woman is good enough for him!

Kate, I would have been good enough for him! :-)

I have all the Beatles autographs, plus the rest of the cast from A Hard Day's Night. It's on a menu from the train where a portion of the movie was filmed. A waiter on the train got it on one of the dining car menus (so it's dated). He was friends with my grandmother. When she told him I was a big fan (by then this was about 1975), he said, "Maybe she'd like this."

I should get it framed.

You, my friend Lorraine, better watch your back. I could use a few autographs. Oh yes I could. :-)

Lorna-you'd better get that framed...and hung prominently in your home! I'm a huge Beatles fan-always have been, although I wasn't around in their heyday. (I was born in the late 60's.) George is my favorite!

LOL--it' in my safety deposit box. It'll probably stay there ....

Can't say I had much of a crush, but for me, the Beatles invented music, so you can say I'm a fan. I appreciated Paul's gift for melody, John's brilliant wordplay, George's understated humor. But I identified with Ringo, who was smaller than the rest, easily overlooked, and absolutely essential.

Leann...three of my girlhood friends had a Beatles Club...George was mine!! I was actually able to meet him one time during his solo years...stood there speechless and gawking. My dear sweet daddy took my sister and I to see The Beatles here in Detroit...couldn't hear a thing over the roar of teen girls...but it one of my fondest memories. Also the first of many many concerts...

I liked listening to music when I was a kid. But nothing ever really impressed me, not even Elivs. When I first heard the song, "I Want to Hold Your Hand", I felt like I was hit with lightning. It was that extreme. I knew they were the band for me and still are today.

I wasn't big on Elvis, either. Or Motown. But like you, when I heard my first Beatles song--which I think was "She Loves You"--I was instantly in love. I still have my original scratched up vinyls.

Well, the Beatles were before my time, so I never really was a fan of them. Never been to many concerts, but I did go to see a Belgian band called Clouseau ... ooo the eyes of the lead singer ...

My lightning moment happened in a strawberry field, and the song was All My Loving. I was dizzy. I couldn't see. It was years - and all their albums - before my vision cleared.

And I'm still in love with Paul. Nancy had better take care of him as well as Linda did, or I'm taking over. Leann, you with me?

I'm with you, Laine. We can be sister wives. Okay, maybe my husband would object, but I'm still dreaming!