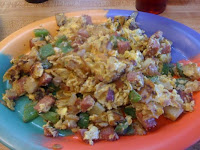 In Wisconsin, we don't eat to live. We live to eat. That's why we are part of the "breadbasket" of America and also considered the supreme dairy state. German's settled here bringing beer, sauerkraut, and sausage. We love our brats (no, those aren't naughty children, they are sausages). My favorite German breakfast is called hoppel poppel.

Hoppel poppel is a fried hodgepodge of ingredients, but it always has to include potatoes and eggs. Other than those two staples, anything goes.

Start with a little oil in a large pan, add chunks of potatoes (I like to steam them a little first, otherwise it's a while before I can toss in the rest).

When the potatoes are coming along, add chopped onions (any kind), mushrooms, herbs, corned beef, sausage, whatever. Use your imagination, have fun.

Why not throw in cubes of sturdy bread, which will come out crunchy and flavorful, sort of  like French toast?

After all that is nice and brown, add eggs (three or four or more) and scramble them.
And because we are the dairy state, finish your creation with shredded cheese over the top.
Take it off the burner, cover, and let that wonderful  Wisconsin cheese melt over the whole mess.

What a way to start the day!
What about you? What's your favorite breakfast indulgent? Have you had hoppel poppel?

Looks tasty on closer inspection, the small photo doesn't do it justice, looks a little like what my dog brought up the other day ;)

I'll stick with green apples, avocado and black tea, thanks

Haha, A. I'm looking at it from your POV and it could go either way!

Well, something new that I have not tried. It does look something like a mess, but a lot of really yummy dishes do. Maybe I'll try this.

Hmm, I've been making something like this for years, and never knew that it had a name. Now I know!

My once a year indulgence is Eggs Benedict, Yum!
my usual breakfast is egg beaters and one slice of whole wheat whole grain raisin bread.

I never do eat breakfast, but I could have some of this for dinner instead. For sunday lunch I often throw a lot of things in a frying pan like mushroom, onion, bellpepper, tomatoe, ham, some mystery ingredient, and then some eggs. I call it my super egg.

Sounds good, Deb, but fattening with all those potatoes in there. Just those veggies in with the eggs (like Auran's above) would work for me.

I used to make that with potatoes, bacon, onion, eggs and cheese for my kids. I think my mom called it Farmer's Breakfast (she was from Illinois). But all that cholesterol scared me off. Sounds like a supper my son-in-law would love.