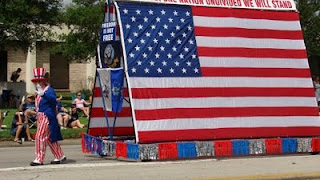 My husband and I have lived in our small suburban Texas town for 32 years. One notable event is the 4th of July Parade. We have the distinction of having the longest running (uninterrupted) Independence Day parade in the United States. Seems many cities and towns suspended their parades during the world wars, but not our home town. It's a very proud day and we even had ABC news here one year. The pictures below are floats passing our library. 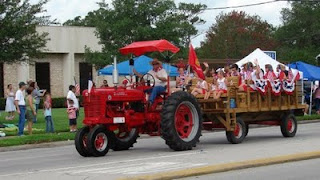 There's a truck raffle, a fair with 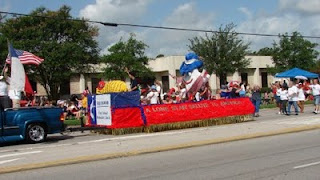 plenty of food in the park after the parade ends. Then there's a spectacular fireworks display in the evening. We have floats (and of course awards for the best) bands and fire engines from all over, local dance teams, gymnasts, and more. Plus a whole town sitting along the main street to watch the festivities. Celebrations like ours go on all over America and we all probably believe ours is the best. We never missed a parade while our children were growing up, mostly because they were always IN the parade. But the last few years, we haven't gone the three blocks down our street to watch.

Problem is, July 4th is hotter than a depot stove around here. I remember one year my sister and her kids visited from Seattle on that day. They nearly melted in the heat. Not a fun experience when you're used to 60's and 70's and most likely rain on the 4th. They never came back to visit in the summer again, that I can remember. Then there was the year my daughter's gymnastics's group decided to do cartwheels down the street during the parade. I was waiting at the end of the route to pick her up and she was as red as a strawberry. Her temperature, it turned out, was 104! She didn't do another parade where cartwheels were involved.

In later years, my son and daughter participated as band and dance team members. Do you know what it's like to wear a band uniform or Lycra while marching in 100 degree weather? They grew to dislike the 4th of July parade just a bit. But to this day, I know they are proud they celebrated such an important holiday and created so many memories. If they are home on the 4th these days, they never miss the fireworks, even if they watch from the roof of our garage. Despite our drought, the city plans on still having fireworks even though other towns have banned them this year. I think the city wants to keep that record intact, too. 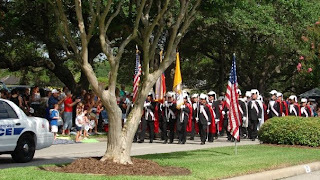 Happy independence, everyone! What's your celebration going to look like?
Posted by Leann Sweeney at 12:01 AM

Wow, that kind of heat sounds brutal! I know we have the occasional heat wave here in Holland, but that never lasts more than a few days, and is never more dan 35 degrees Celsius. Enjoy the thought of the 4th of July if you can't enjoy the parade and other festivities.

Wow, I was sweating just reading that, Leann! Sweating notwithstanding, I think it's wonderful that your town keeps up such a lovely traditional parade!

My celebration will be enjoying fireworks display on my TV and grilling a few food items.

It has been even extra hot here this summer because we have only had one day of rain in the last 100 or so. We are experiencing a severe drought. That heat just radiates not only from the sky but from the parched earth, too. All errands happen in the early morning for me. My husband is out walking the dog at 7 AM because neither he or the dog can take the heat later than that. But we will be able to hear the parade since we live so close to the center of town. And we will certainly hear those fireworks. Happy holidays, everyone!

Wow Leann. We're having heat in the low to mid 100's in Sacramento, Ca right now, but we don't have the humidity you do in many parts of Texas. Hopefully where you are there isn't as much humidity. Fortunately we aren't in a drought - we've had the wettest June on record.

I will be staying home this 4th - partly because of the heat and partly because I want to be with my cats when the fireworks go off. There have been some that started a couple of days ago and the cats are already on edge. Right now I have my 2 cats, one adult foster, and one foster mother with her seven babies. So I will be trying to calm 11 cats! Take care, stay cool, and have a great 4th!

I sure understand the heat thing. For those of us in WI when it gets to the high 80s and into the 90s PLUS very high humidity....it can get to a heat index in the 100s. Can't breath!! But I do have to tell you about my 4th of July when I was 11 and living in the U.P. of MI. Had to cancel it....snowing so hard they couldn't keep the fires going to lite the fireworks!!

I was raised in the middle of Illinois, where we had heat, humidity, and the occasional thunderstorm for the 4th. Now that I live in southern California, I admit to being jaded about the holiday - ONLY because I get to see fireworks every night, courtesy of Disneyland. Tomorrow, however, we will join friends at a country club that's offering food, drink, and a bird's eye view of the show.

I live in Tx too and we haven't left the house all day. Its like walking into an oven. We may venture out to watch the fireworks at the marina and hope for a breeze tomorrow night.

I live in Dallas, in a small community within the city (Lake Highlands). We have a 4th of July parade every year too - it is small, but we went this year for the first time. After the parade there is a carnival for the kids (food, bounce houses, face painting, petting zoo, etc.). We took our 3 yr old yesterday. Whew it was hot! And I am pregnant. Very pregnant (csection is in 8 days!). I came home and collapsed on the couch for the rest of the day. My poor swollen feet....but it was worth it!

Small town America gets pretty patriotic and Aryn, you made quite a sacrifice to enjoy. I hope all goes well with the new baby!!

I live in San Diego so there are parades all about the city. But, last year we ended up driving about an hour from us to a small mountain town in our county that has what is really like a small town America parade. I loved it! We didn't make it this year though...instead we went to a BBQ luncheon and pool party which was great. But, next year, we may take the drive back into the mountains to catch the parade again.

Leann, I can sympathize with you children. I was in the band in San Angelo, TX. Rodeo days parade were always the hottest day of the year and those uniforms were not fun but the parade was a big event! Now I'm in VA and although your post make me a little homesick, I also enjoy that little taste of the Lone Star state. Hope you had a safe and happy Holiday!