May and June are jam-packed with celebrations in my family. My sister's birthday, my son and daughter-in-law's anniversary, Mother's Day, my birthday, my anniversary and Father's Day. This year, because my husband had to have major surgery, all the celebrations got a little lost. There were lots of flowers, yes, but we were naturally preoccupied. Then my precious cat died. That was the loss that mattered most, that and a big anniversary sort of passed over.

But this past Thursday, my daughter came to visit and we had a little family meeting about what we expected from this wonderful visit. Mostly we just want to enjoy each other's company, but for my husband Father's Day, he wants his favorite banana bread. It's a recipe I've used for decades and I can make it without eggs and it comes out beautiful and delicious (I'm allergic to eggs). We'll have banana bread after a nice dinner out. He's well enough to get out now and that's cause for celebration in itself.

What did I want for my missed birthday? Cake! Since my kids have left home and have families of their own far from Texas, we rarely celebrate much of anything like anniversaries or birthdays. Plus, cake made without eggs isn't always easy. Kind of falls apart. My daughter has been experimenting with vegan cooking, though, and vegans do not use eggs. So she grabbed her ipad, found a recipe and tweaked it, deciding that cupcakes would probably hold together better than a layer cake. She got busy and wow! did those cupcakes turn out beautiful and de-lish! Made me feel very special, too, Have a look see! 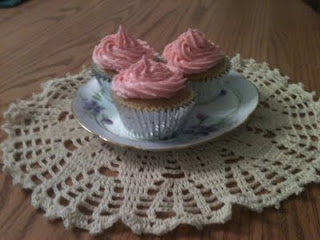 Anyone done anything special for you lately? Just a cupcake can make a day wonderful!
Posted by Leann Sweeney at 12:01 AM

Cupcakes are great! It's great that nowadays there are so many resources available on the internet....how to make vegan cupcakes???....just start surfing the net and you'll find an answer. I'm glad you had your cupcakes. :)

I'm glad there are recipies to be found for everything, and that the cupcakes looked and tasted good.

Reading Shoot from the lip at the moment and loving it.

So glad you had something special. They are gorgeous!

Thanks so much, and Aurian thanks for going for the backlist and reading a Yellow Rose Mystery. The books keep selling and haven't gone out of print so I feel very lucky.

Today I am going to make cake lollipops for a friend's birthday. hope they turn out how I see them in my head!

P.S. The Yellow Rose Mysteries are some of my favorites!!!!

Saturday was hubbie's birthday. He prefers pie, so I made a pumpkin pie instead of cake.

Cake lollipops? Sounds wonderful! I am a pie lover myself, Carol, and pumpkin is my favorite, too!

Funny you should ask. Doug brought home two Oreo cupcakes Thursday. Yes, cupcakes are wonderful things. Congratulations on all of the occasions, but especially for being able to write this story for us to read.

Love those cupcakes, Leann. Sounds like a great birthday celebration.

The cupcakes are so pretty.

For a cake made without eggs try Wacky Cake. It's a W.W. II type cake for when eggs were rationed. It's chocolate and instead of eggs there is vegetable oil and vinegar. It was in a recent Joanne Fluke book (about the third book back). I also saw it in another cookbook spelled differently (Whacky Cake).

My birthday was last Saturday so my husband made me a pumpkin pie cake. I just love it and it is even better because he made it for me.