Please Pass the Syrah, Merlot ... or the Mystery White Wine

I signed my new release at Murder By the Book yesterday. Very fun. In the past, when I was writing my Yellow Rose mysteries I always sent a bouquet of yellow roses to the store and the vase of flowers would sit at the signing table next to me. Then, my cousin told me about a New York state wine called "Abby Rose." For those who don't know, she's the heroine of the Yellow Rose books. I took a bottle of that wine to a signing or two at the store.

As I considered what to do for the cat series, I realized that the last couple times, I'd taken nothing but bookmarks to offer to those in attendance. It's not like my cats would be welcome. There is a darling resident dog in the store, after all, and who knows what chaos would reign. But then it dawned on me. Wine again! Three main character cats named after wine. What could be better? 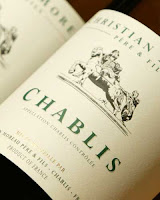 But I soon discovered that one of the wines I named my cats after has gone the way of vampire books. Pinot grigio and sauvigon blanc are the favored "white." In the words of a famous super model, "Your either in or you're out." Chablis is definitely OUT. For someone who no longer drinks anything alcoholic, this was a surprise. Oh, you can get it in boxes, but a big, old box of wine at my signing was not what I had in mind. So, there was merlot from the Yellow Tail winery, syrah from Kendall Jackson and the mystery white. It's called "House White" and who knows what grape created it. But since there is a lovely house on my book cover, it was the best fit.

Will chablis, like vampires, make a comeback? Will anyone care? Or is the wine I used to drink gone, gone, gone?
Posted by Leann Sweeney at 6:59 AM

Are Vampire books out now? I didn't know. Nor did I know about the Chablis. (I need to get out more) My FIL served us Chablis, in a bottle, not too long ago- but who knows how long he had had it.

I have had the Yellow Tail Merlot and its pretty good. II prefer reds over whites, but I always liked Chablis.

These things run in cycles- just wait a while and Chablis will be back! In the meantime, I think "House White" is an excellent choice.

I don't drink wine, so no idea about in or out of style. I did read the first two books of this series in the last few days, and I really liked them. So, please write many more about those cats, and the ones Jillian rescues.
Does Candace gets her fireman some day?

I'm not a drinker, but I love the names that wines are given. Chablis is out? Didn't know that.

Glad you had a good time at your book signing.

I do think Chablis will come back, heck, bell bottoms came back for a while.

Thanks all. As for the fireman? Well, something concerning him comes up in the next book. :-) I learned from my cousin, who is wine expert, that "chablis" is a region and is a generic name. As the country has become more educated about wine, more specific names about the grapes are now on the bottle. He told me chablis is 100% chardonnay. But Chablis makes a better cat name! :-) Besides, cannot change it now!

I'm not a drinker, either, so I'm clueless about wines, but think it's really nice you bring them to your signing!

And I love the name "Chablis" as a kitty name.

Not a wine drinker, but I was familiar with Merlot and Chablis - had actually never heard of Syrah. But I love all 3 names for cats. Hopefully someday you'll find an old bottle of Chablis somewhere that you can hang on to for your signings.

Awhile back, I had named a litter of kittens at the shelter with liquor inspired names: Chablis, Guinness, Kahlua, Cognac, Tequila & Bacardi. Then later I named siblings Merlot & Brandy.

Still on my list of names: Jager, Mai Tai, Martini, Rossi, Daquiri, Zinfandel, Chardonnay, Marguerita, Jose Cuervo, Champagne, & Moonshine (& added Syrah). Not bad for someone who doesn't drink - lol. But they do make good cat names that people associate with.

I'm with Kelly...are vampires out and chablis? I don't drink much, especially wine, so I wouldn't even know a wine to suggest. I love that you do serve drinks at your signings. You are a very good host.