It never fails that April showers bring tornado nightmares. At least for me. I can count on them beginning in March and they go all the way through fall. Not every night, but enough for me to think building a storm cellar might be a good idea.

When I lived in Massachusetts, we never had to deal with tornadoes. Just lots of snow. Hurricanes once in a while (but at least those have a lot of warning). Nor’easters. That kind of thing. I’d take all that over tornadoes any day. 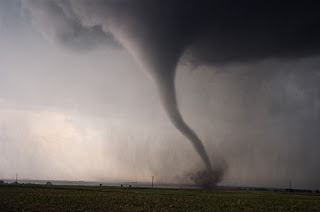 We had our first tornado warning the other night. The sirens started blaring around one in the morning. Baby Girl was at a sleepover and actually called home to make sure we heard the sirens and were taking cover (how sweet is that?), and son #2 was also at a sleepover but only called by accident (bum dialed) just before the sirens went off (not so sweet but kind of amusing).

Thankfully, no tornadoes touched down in our county, but there were some to the south and to the north. The devastation of a tornado is truly the stuff of nightmares. Everyone here is safe and sound, and we’re counting ourselves lucky.

I’m really hoping that for the rest of this month, April showers simply bring those May flowers. As for the rest of the storm season...that storm cellar is looking better and better.
Posted by Heather Webber at 4:47 AM

There are no tornado's in Holland, luckily. I've seen reports on tv, and the devastation they leave behind, I would really find it horrific to see one in reality. I wish your wish to come true, and that you will never have to deal with it personally.

Well, having lived most of my life in Texas, tornadoes are a fact of life here. And, yes, they come unexpectedly. The warnings and notices on TV and such are much more frantic than they used to be when I was a kid, but the warning system is a lot better too.

Me, I don't like the thought of blizzards and earthquakes scare me to death. :-)

We had severe thunderstorm warnings around 4am. Technically that means we were supposed to go down to the basement. However, we chose not to as we had to be up in a couple of hours to open our garage sale! I guess we are used to the storms here in KS so we figured we'd be safe sleeping through them. Probably not the smartest thing to do, but this time sleep won over taking cover!

Since I grew up in Illinois, tornadoes scare me to death. They are just so darned unpredictable. But, the one that came closest to me happened in Conn.; it took down my favorite tree which landed on our vehicles.

Hmm, Holland. Might have to look into moving there! Thanks for the good wishes--I'll take them.

Kay, I'm with you on the earthquakes. All natural disasters are just plain scary. No two ways around it. I guess being prepared (as best we can) is our best option.

Breaunna!!!! You are a seasoned tornado warning survivor if you're listening to sirens and planning yard sales. Too funny. I hope to reach that level someday and not full-out panic every time a siren goes off.

Barbara, who'd have guessed a tornado in CT??? Wow. And isn't the loss of a tree just so sad? The storm that came through the other day knocked down one of our pine trees. We got it back upright, but who knows if it's going to survive.

We have snow falling right now in upstate NY. I'm annoyed but I'll take it over tornadoes any day.

You are welcome to move to Holland Heather! No tornado's, no hurricane's, no earthquakes, no blizzards. At the moment it is 25 degrees, which is way too hot for April but I am enjoying it. I have booked a hotel in the country for the eastern weekend, and am eagerly anticipating it.

Sarita, I'd be annoyed, too. It's almost May--sheesh! Time for daffodils and lilacs, not snow shovels.

LOL, Aurian--had to ask Mr. W what 25* Celsius translated to in Fahrenheit (77*)- his first response: "It's warm." LOL! But I love warm, so I'm okay with that. Holland sounds wonderful!!!

I live in CA and am amazed when I travel at the reputation CA has for earthquakes - many people saying they would never live here because of the earthquakes. I've lived her almost 60 years and can remember only TWO major earthquakes, and the damage and injuries/death from those have not been anywhere near what other parts of the country deal with EVERY YEAR. I would be much more afraid of a tornado, hurricane or even severe winter blizzards. I guess it's what you're used to.

Wednesday night I was on the phone with my mom when our sirens went off. We were under a tornado warning for about 15 minutes or so, but I don't think it touched down or caused any damage or anything. (And yes, I sent mom an e-mail before I went to bed letting her know we were ok!) :)

Wow, hearing a tornado siren must be really scary. I'm with Lynda....have lived in CA all my 40 years, and have never had a major earthquake here where I live. In fact, in all my years here, I've felt small earthquakes which are over in literally seconds. Most of the time you don't even know they happened. Or, you go, "Did we just have an earthquake?"...and then get back to work or sleep. The last one we had my husband was in the office and called out to me, "Did we just have an earthquake?" and I had not felt a thing, just a room away. :) Of course there is always the possibility of a big one occurring, but I think all of us here figure we will deal with that if it happens.

I was working in the Great Smoky Mountains and had to assist in a Search & Rescue when there was a tornado in the area. I saw lightning and got pelted by hail before getting lost in the dark woods for a few minutes. I didn't know about the tornado until I got back to the Ranger Station.

Here in Washington state we get a "baby" tornado (if it "touches down" it's only long enough to get one tree and it's back up and gone) about once every other year. We get a "baby" earthquake (Honey, did you feel that?) three or four times a year.

We have tsunami drills along our entire coastline. That's where the sirens go off and we hit the evacuation routes "just in case" a couple of times a year.

So here, we prepare for anything!

I'm with Serita- I'll take an Upstate NY Snow storm over tornadoes, hurricanes and earthquakes any day. At least at the end of winter my house is still standing!!

For some reason, our April showers are bringing fruit flies! Isn't it too early for that in the Midwest?