When the Rodeo Meets Rush Hour

There are many advantages to living close to one of the largest cities in the country. Events, restaurants, sports teams, the arts, big libraries, wonderful medical care. The list could go on and on. In my younger days, I took advantage of so many of these things in Houston. But I don't get out that much any more. They don't mean as much now.

One thing I hardly miss, however, is my weekly writer's group. Those people have made me a better writer and I hope, with their help I will continue to grow. But, the meeting is at 6 PM and it takes me 45 minutes to get there traveling on 4 different major highways. 45 minutes on a good day. For the most part I manage the traffic pretty well, but this past week I met up with freeway hell. Kiss, the rock group, not the good kind of kiss, was playing at the Houston Livestock Show and Rodeo in Reliant Stadium (the stadium that replaced the Astrodome). Yup. I wondered the same thing. Why Kiss at a rodeo? Garth Brooks, Taylor Swift, yes. But Kiss? I don't have an answer except they apparently still have plenty of fans. And I believe all 80,000 of them were on the freeway at the same time that I was last Tuesday.

My problem became apparent when it was far too late to turn around and go home. I was stuck in a five lane parking lot. There really is no way to get to the southwest side of Houston without hitting that traffic--or without hitting the traffic made up of people going home from their downtown jobs in the opposite direction. Those cars were also stopped dead. 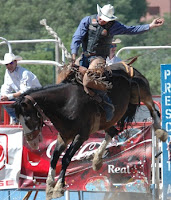 I ended up adding an extra hour to my trip along with frazzled nerves and an upset stomach. Some folks don't handle traffic like that with the patience required. They like to drive on the shoulder, cut people off and make everyone else more tense than they already are. I arrived at my meeting wondering how awful the trip home would be. I got lucky. The Kiss concert must have still been going on. Kiss? Really?

How about you? Do you commute? Live in the country to avoid problems like this? Or is it no big deal to find yourself sitting in traffic with nothing to do but inch along? All I can say is, I will NEVER leave home without an audio book in my car again.
Posted by Leann Sweeney at 12:01 AM

I don't commute but I understand the feelings you get while in traffic. Yes life in the country does avoid it for the most part, but you're also further from things like you mentioned. I carry an "emergency " book with me all the time. When I'm stuck anywhere I have something to calm me and that I can enjoy! Yeah, Kiss apparently will do anything for a buck!

I helped out at my daughter's office a few years ago. The car ride there took 25 - 30 min. At night it could take an hour and a half, crawling, stop and start, it was horrible. I never figured out what caused the traffic jams. Too bad I didn't have audio books.

Bless your heart. I've BEEN to Houston. Fortunately for all involved, I was not driving. But I've sat in enough traffic there to truly feel your pain. And yeah..KISS at a rodeo is just..well, wrong.

Wow, those guys are still playing? I am feeling sorry for the livestock, they won't know what hit them!

I am a bus commuter, perfect for reading my books before getting home and heading into the kitchen.

I take the train for my commute and I never leave home without a book or an e-reader.

I can't believe they're still around.

Not only are they still around, but sold out the venue I work at during the summer last year- all 25,000 tix. And it was a fantastic show. I actually spent it directly on the side of the stage by the canon's where Gene usually goes. Got lots of tongue that night! They still put on a freaking awesome show!

As for traffic, I know just when to leave home in the morning and which way to go at night to avoid the mess in Albany. Where my daughter lives in LA on the other hand---if she's driving, I read and don't look out the windows! If I'm driving, I tend to take the city roads rather than the 405 or 101

My commute isn't bad during the week, but like you my writer's group isn't close by and Tuesday evenings used to be a pain driving through rush hour traffic. Fortunately, they've opted to have two meetings per week and Saturday mornings the traffic isn't so bad.
Ann

You guys are too funny. And we have a Kiss fan, so we must be nice. But yes, Kiss at a rodeo? That's all kinds of wrong. :-)

I live in Dallas and ride the rapid transit train to and from work. I really like riding the train - an extra hour a day in which to read! Last summer I drove in morning commute traffic to pick my husband up to go to the airport and I told him I will never work anywhere in Dallas that I can't ride the train to (not that I'm leaving my job anytime soon!).

Houston only has rapid transit around the medical center--and there are frequent collisions between cars and the trains. Houstonians consider their cars the equivalent of what used to be their horses.

A few years ago, I applied for a job in Dallas (I live in a small college town north of the Big D). I went for the interview on a snowy January day, and it took 45 minutes. I foolishly thought the normal commute would be *shorter* without the snow. I wasn't counting on the huge number of people who were staying home that day.

My commute to Dallas took 40 minutes with 0 traffic. More often it was 1.5 hours. Sometimes it was 3 hours. I kid you not.

And forget public transport. We're getting light rail someday, but this is Texas - where SUVs rule.

I kept that job for 3 years until I just couldn't stand it anymore. In the end, I took a massive pay cut to eliminate the commute. :)

My neighborhood in Fort Worth pretty much fills all my needs, so I avoid the traffic. But Houston traffic scares me. I never drive there! Fotunatelyh it doesn't seem to both my son or daughter-in-law.

Kiss - at a rodeo????
My commute to work was 11 miles and it generally took an hour - if there weren't any problems. The commute home was often even longer. In traffic like that, some just take it in stride, but - as Leann said - some do crazy things that make it worse. My commute was one of the reasons I retired early. Now, when I get into that type of traffic, I thank God all over again for getting me out. In those days, I didn't have audio books, but now I don't leave home without them.

I don't have to commute any more, but I do live in southern California, so when I have to get on a freeway, I make certain I've got plenty of water, tunes, Exedrin, and I've peed before I left. I also keep an actual MAP in my car so I can get off on side streets if I have to.

KISS at a rodeo doesn't surprise me. Have you watched Gene Simmons' show on A&E? That guy is Mr. Marketing - he'll do anything for a buck. I love his kids, tho.

Okay, commuting is a big ZERO.
Being prepared for the commute to go wrong is a TEN. (because it will).

Houston traffic is an everday event for me. I live about 30 miles from where I work in Houston & do the commute Mon-Fri. I enjoyed last week - Spring Break means less traffic (I did avoid rodeo area totally). However, it was bad Friday because of the SBers headed south to Galveston. So glad I do audiobooks in the car! :)

I live out in the country. My home is approximately 17 miles to town; which includes a population of 6,600. Our whole county only has a population of 26,000.
However, I used to live near
Dothan , AL and I used to have to drive through major cities traveling back and forth from there to here. I didn't mind it as long as I had something to keep me occupied (along with air and heat). I used to have a car with no air and I got stuck in rush hour traffic of nashville, I wasn't a happy camper.

When we moved to Houston in the September heat, we brought our car with us. No air. And we couldn't afford a new car. Can you say misery? So I understand where you're coming from, Tiffany.

first of, I LOVE KISS!!!! i must've seen them at least 7 times!!!!!
but i totally understand about being stuck in traffic, i live in NewYorkCity, after all!!!
i was stuck in traffic to NewJersey via the HollandTunnel twice, that i have vowed to NEVER EVER attend concerts in NJ, especially on a weeknight......
so yeah, i feel your pain!!!!
Cynthia fr NYC ~~

Well, heck, you should have come for the rodeo when Kiss played, Cynthia! My daughter lives in Brooklyn and I have visited enough to understand why she doesn't own a car. Stuck in a tunnel? I'm not claustrophobic but I become that way stuck in a tunnel!

I do commute for work, 50 miles roundtrip and I never leave home without my audiobook. It's the best way for me to handle the crack-a-doodles who drive the roads and parking lots.
{HUGS} for the KISS traffic. They are still a guilty pleasure.

Leann, I feel your pain. I've lived in Houston, Dallas and Austin-- among other places-- before getting the heck out of the big cities and settling into the county life of East Texas. I do miss a lot of the shopping and cultural events, but the peace of mind and less frazzled nerves make up for it any day!

Who'd have thought, KISS at a rodeo?!

Vickie, I love "crack-a-doodles" and plan to steal it from you! Never heard that term before, but it's a keeper!

Yes, crack-a-doodles just might end up in the next book! LOVE IT!

Oh, and Lynn, though Austin isn't as big as Houston, that BIG university (University of Texas where my daughter graduated from) and the terrible layout of the freeways makes it one of the worse cities I've ever driven in. (My daughter had 2 wrecks there--but she, like many of the students, was just a terrible driver.)

I want to know who designed the freeways entrance/exit ramps in the Little Rock area? The access roads are two-way, so you have to merge onto the freeway while crossing oncoming traffic! Stupid! (I get aggravated every time I'm there.)

Anyway, my husband was recently in Dallas and in Orlando, and said the traffic was totally insane. Seriously, an hour and a half to go 15 miles. He was glad to get home.

BTW, I never was a KISS fan, and I like Gene Simmons even less after seeing his attitude towards women when he was on Celebrity Apprentice a few seasons back. (Sorry to those of you who are fans.) :)

My family lives in the country and commutes to town only when we need to get a lot of groceries (or other supplies.) Seems like the traffic just gets crazier over there each year!

Sorry to hear you had such a bad time with traffic lately!