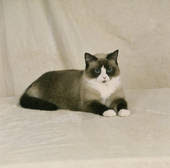 As I've mentioned on several occasions, I have four wonderful daughters who are literally scattered around the country. My second oldest, Melissa, lives and works in Manhattan. This past weekend, I received a sad message from her. Her dear sweet cat, Sid, had suddenly become quite ill. Vet visits were not encouraging. A large malignancy was suspected. Sid is seventeen years old. During the weekend he went downhill fast. He'd stopped eating & drinking water, then suddenly his legs gave way. He could no longer stand up. He could no longer move. Melissa rushed him to the vet on Sunday, yesterday, and....well, the decision was made to to keep Sid from suffering. Sid passed peacefully yesterday afternoon.


Melissa has been grieving ever since, understandably. Sid had been with her for seventeen years. A steady, constant companion, Sid was one of the calmest, most loving cats I've ever known. He came into Melissa's life as part of a pair: Sid, a Snowshoe mix and his sister, Nancy, a Himalayan mix. Sid and Nancy were named after members of the '80's rock band the Sex Pistols. Melissa was an "80's" girl.

When Melissa called me with the news, I told her I believed that Sid's wonderful spirit was still with her. I believe our beloved pets' spirits remain with us. They are Love. Pure and undiluted. And they bring us joy.
** Note: This is not an actual photo of Sid, simply the closest I could find on the stock photo website late at night.
Posted by Maggie Sefton at 12:02 AM

So sorry to hear about Melissa losing Sid. The four-legged furry creatures are part of our family. May her memories of Sid give her comfort. Keeping her in my thoughts and prayers.

I am sorry to hear that. Our pets become quite a companion for us whether we have them for a year or seventeen years. They mean a great deal and play an important role in our lives.

Pets are amazing they give off a sort of healing power and why no animal is replacable, I hope that she may find comfort in another pet.

My heart goes out to Melissa. Our beloved pets aren't with us nearly long enough. Even 17 years is not long enough. Hugs to Melissa and your family. I too believe that Sid's spirit is still with her.

I'm so sorry. I hope happy memories will help during this difficult time. He'll be waiting for her at the Rainbow Bridge.

Losing pets is always hard. I have noticed though, with my own cats, that once they get sick, it happens fast. They don't linger or give you time to suffer with them for long - one day they're fine and within hours they're gone. It's almost as if they're sparing us some of the heartache of long illness. Of course, this is only going by my own experience.

I hope your daughter takes your advice to heart - her cat's spirit will always be with her.

I am very sorry for Melissa's loss of a close and dear friend. Our pets ask nothing from us but give us so much. I too, had a 17 year old Siamese that I had to make the decision to keep him from suffering. It was the hardest decision of my life. I still sometimes feel a cat walking on my bed only to turn around and there isn't a cat in the room. I DO believe our pets are with us always. Take care and again I am sorry..Loretta

I am so sorry your daughter lost her beautiful Sid. Please tell her I feel her pain. My three are all senior citizens and have been with me through a lot. That's what our pets do--bring us such love and comfort.

Mason Canyon & hatfieldtiffany---You both have hit upon the heart of this. Our pets become loving family members. They're always there to welcome us home. And they are ALWAYS happy to see us.

Linda & Katreader---I agree. Seventeen years is not enough. And, I love the Rainbow Bridge image.

Mardel---You are so right. Every time a beloved pet of mine has passed, they have gone quickly, in a matter of 2 to 3 days. I, too, believe that our pets' pass quickly to spare them suffering. They are such powerful spirits of love.

Oh, Loretta---I believe that's your beloved Siamese "walking" across your bed in the morning. Their loving spirits are still there with us.

Absolutely, Leann---Our pets are here to bring us love and comfort. One metaphysical writer refers to our pets as "pure positive energy." A reminder of what we are.

Maggie, I am so very sorry to hear your daughter has lost her beloved furry companion. Sid is out of pain, but she will miss being able to huggle him. We know only too well how hard that is.

Loretta, I agree with Maggie. I absolutely believe that many loving pets are allowed to keep watch over their owners and we can still feel their love and concern. I think your Siamese friend is still checking on you.

My husband likes to say that while the love of a dog can be very real, the love of a cat is a special honor, because that gift can never be compelled.
*hugs*

I'm sorry to hear about your family's loss. From past experience, I know how much it hurts!

So sorry to hear of Melissa's loss. Losing a loved one, whether a friend, family member, or pet, is always hard.

Maggie, I absolutely believe Sid's spirit is with your daughter. I've sometimes felt that one of my beloved pets is sitting near my feet on my bed at night. I can feel the energy vibrating. It's very comforting to know we will see them again, too.

Maggie, sending lots of big kitty hugs from my family of kitties to your daughter.

A few months back we had to put down our beloved black kitty of 18 years. My husband had had him since a wee kitten, and he was a huge part of our family. Not too long ago we got another kitten, to keep our 4yo Maine Coon company, and I swear he has the spirit of my husband's cat him. He's full of life and mischief and a constant joy to us and our other cat. I definitely believe the spirit lives on in our animals :)

I'm so sorry to hear about Sid.

I'm so sorry to hear about your daughter's Sid. The overwhelming love we get from our pets leaves such a hole when they're gone. But it's exactly that love that convinces me we'll see them again. Love like that never dies, it just waits.

Aw, that is so sad to hear anytime. Esp since he has been with her so long and she is far from home. I know our pets are as much a part of our family as the kids. We even bought an RV so we could take them on vacations with us- the dogs, not the kids.

She is in my thoughts as is Sid, and I hope someday she finds another friend or two!

{HUGS} to Melissa. I do believe the spirit remains.

Thanks, Shushan, that's sweet of you to say.

Deb, signlady, & Kate---You guys all understand. And also know his energy is still here. And loss is always hard.

Bella---I believe you. I'm convinced my dear sweet Sam, part Lab/part Rottie, came back in my sweetheart Katy, my Border Collie, black shorthair. She's scary smart and can read my mind. Sam could read my mind for all of his 15 years. :)

My sympathies to your daughter. I recently went through a similar experience with my cat, Miss Kitty. A loving rescue who loved to cuddle against my chest and neck, or as I said hug me. She was my "baby love" as I called her and having no children truly my baby. The rainbow bridge card the vet sent was a comfort. It does take time but assure Melissa as painful as it is she did the best she could for Sid and loved him every second.

Vicki---Thank you SO much for your loving comments. They mean so much. Miss Kitty is with you still. I'll bet you've felt her with you.