SCENT OF A LOVER

Have you ever read about the experiments done with newborns to see if they could accurately identify their mothers by their scents? Turned out that they could, although I could have predicted as much. I’m very sensitive to scents. I knew what my babies smelled like. I knew my mother’s scent – Red in later years, Tabu in her earlier years. I knew my husband’s scent. His was a mix of powdery deodorant, traces of Drakkar Noir, and his own personal chemistry. Totally unique and it drew me like a magnet.

I bring this up because I detect his scent a lot these days. I know he’s reminding me that he’s still with me. It will suddenly fill my nostrils after I’ve been sitting at the computer for too long, as if to remind me to get up and stretch, have a cup of tea. I’ll get a burst of that scent when I see something that reminds me of him and start to feel blue. Sometimes I’ll open the laundry room door to put in a load of clothing, and detect his scent. It’s comforting to know he’s with me.

I’ve also been awakened to the scent of coffee brewing, just as I used to be when my husband was still with me. Usually it’ll happen if I oversleep, a gentle reminder to get up and get going. Sometimes I need that a lot.

Scent ties in so closely with my memories, too. If I get a whiff of Noxema, I’m instantly transported back to my grandmother’s house, where I’m five years old again, bouncing on her bed while she puts her hair in pincurls and covers it with a hairnet. How many of you are old enough to remember hairnets? 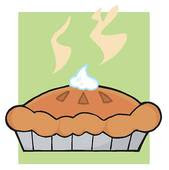 d. My mom used to use leftover pie crust to make tiny little cinnamon and sugar pie shells in empty aluminum pot pie pans. One for all three of us kids. It was a special treat.

Do you have a favorite childhood memory that is triggered by a scent? Any certain food or perfume that reminds you of someone who has passed?
Posted by Kate Collins at 10:32 PM

My mother loved the scent of gardenias. It was her perfume. Each time I smell it I think of her and her hugs.

My mother passed over three years ago. I took care of her the last six months of her life. I still occasionally walk into my back bedroom where she stayed and smell her perfume. This lets me know she's still around looking out for me.

It is quite amazing how we are reminded of a memory with a scent or how we can think of a particular memory and suddenly we can remember the smell that was in the air that day.
Everytime I smell vicks sav it reminds me of the many nights I spent with my grandmother, she would put it on every night and right next to the vicks sav she had a glass of water with a tissue over it. The smell of homemade biscuits and chocolate gravy take me back to the mornings I would wake up at my Aunt Dee Dee's (Debbie is her real name but I couldn't say it when I was little so I said DD and it stuck) house.
Kate, it puts a smile on my face to read your writing how well you deal with your husband's passing. The way you know he is still with you. I believe that and it is wonderful because you will always have those memories.
I hope that once our grieving is over, after the passing of my father-in-law 10 days ago, that we can have those kind of memories where we will know he is still with us and pushing us to keep going.

Bless All of You!!

Tiffany, my condolences on your loss. And thanks for your kind words.

Petunias remind me of summer visits to my grandparents house back in the 40s/50s and make me smile. I plant some every year.

My mom, who died a year and a half ago, always used Maja soap. Cleaning out her things, I found a half-used bar and took it home with me. Whenever I needed some comfort, I'd take out that bar and sniff it, and it was like she was there in the room, saying, "Everything will be fine."

Mine is Swedish Coffee Bread. It was the cardamon seeds that made it so memorable and it takes me back to watching my mother break open the pods and then grind up the seeds with a mortar and pestle.

I still have them and use them each Christmas as I follow the tradition and she's there with me, probably gnashing her teeth a bit (I'm not the world's best baker).

Pipe smoke (although I rarely see a man with a pipe these days) reminds me of my grandfathers, lavendar my favorite relative - a greataunt, and biscuits my great-grandmother who was the best biscuit maker ever. I do remember Noxema (for my own face) and hairnets and pincurls, and I still use Vicks rub on my chest when I have a cold.

I think my mom still uses Noxema! When I smell that, I think of a story she tells on me from when I was little bitty: One day I was a bit too quiet for a while and when she looked for me, what do you think she found? A tiny little girl with Noxema spread all over her face, arms, legs, and just about everything else within reach! She still laughs about that! No picture, though, because the camara was broken. :(

And the smell of Lifebuoy soap will always remind me of my stepdad.

I don't have a scent triggered memory of someone, but I do like how my boyfriend smells.
And yes, I do remember my own grandmother with curlers in her hair and a hairnet to keep them firmly in place! Thanking you for bringing back that memory.

Christmas trees also bring back memories for me. My grandmother had those pretty bubble lights on her tree, and I always remember that when I smell Christmas pine.

I definitely noticed the personal scent of my loved ones over the years. Sadly I used one of those cold medicines awhile back and my sense of smell seems have stayed diminished afterward. Right now I can only notice relatively strong scents. I hope that changes.

Yes, some scents took me back to my childhood, but not all trigger good memories.

My mother wasn't big on domestic arts and I didn't have a living grandmother, aside from my step-father's mom. Every time I smell wassail or banana bread, I think of her. She was actually pretty nice.

The flower post Lorna had up a few days ago showed a few more of my happier scent-related associations. Oil paints too, since my mother did artwork when I was little. My hands aren't quite steady enough for me to do much in the way of the classic arts, but my daughter is doing some neat stuff now. So now I have two people to think of when I smell paints. :)

Fresh turned dirt reminds me of dad and the farm. But he tends to leave me more obvious signs that he's still here.

Kate----I love this post. Of course, your Greek is letting you know he's there with you. :) I love it.

Ev, I'm intrigued, because I receive a lot of signs, too. Do you feel comfortable sharing?

Maggie, thanks, girlfriend. I know you get it. :-)

When I smell lavendar it reminds me of my Grandma. She used to wear a perfume that smelled like lavendar.

Baking bread reminds me of my dad. He used to bake bread. When I came home from school it was wafting in the air, mmm....just love it! My father was a macho man, rippling with muscles who built two of my parents homes all by himself. You wouldn't think a guy like that would love to bake but he did! He cooked all kinds of stuff like chili, stews, apple pies, grilled steaks, etc. He was an excellent cook!

My mother took extra pie crust and using cinnamon and butter, made funny little jelly roll type sweets. And cinnamon is still a wonderful scent today - love cinnamon tea. I agree, I think your husband is reminding you that his love is still wrapping around you. Take care and God Bless.

My Dad was an auto mechanic and the smell of grease in a garage can bring me to tears. He will be gone 42 years this May.

Michele, that is so awesome about your dad. My husband was very macho, but he loved to make our dinner salads every evening and often eggs for breakfast. He shopped, too! Just goes to show that a real man isn't afraid to express all sides of himself.
RosieJo, that's very touching. Isn't it amazing how those smells can get to us?
Annette, I'm wondering if you've passed those cinnamon treats along to your family.