The confession is that I spend more time that I care to admit playing…Every Word on my Kindle. It’s a word game, where you’re given seven letters and have to unscramble letters to make words, and you have to use all seven letters to go on to the next level. 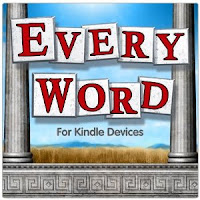 I’m not going to say I’m obsessed, but it’s close. It’s the perfect game while I’m playing the waiting game (at the doc’s office, at the kids’ school…). Plus, I love, love, love word games, going back to when I was little and played Boggle with my family. I still love Boggle, and if it ever comes out on Kindle, I might never get anything done. (There's also Shuffled Row on Kindle, but I don't think it's as fun.)

I’m also a huge fan of word searches—and have been for as long as I remember. It’s a love that I passed on to my kids. If they don’t get word search puzzle books in their stockings at Christmas, Santa hears about it!

All in all, as far as obsessions go, it’s not too bad of one. But even still, I should probably cut back a little bit—before the tendonitis kicks in.

How about you? Are you a fan of word puzzles? Anything you want to confess?
Posted by Heather Webber at 4:03 AM

BookWorm Adventures...I could play that for hours! and....this one isn't as literal, although you do have to use planning and math...(kind of) Farmville and Cityville. Obsessed. Once you start planting crops on farmville, than you have to pay attention to how long they take to grow so you don't let them wither...it's awful...awfully fun!

I love word puzzles. Have you played Wordscraper on Facebook? We'll have to get a game going.

I love word games too. I have Chicktionary , which is hilarious, for my iPad, and I usually have at least 5 games of Words with Friends going at once.

I am the SheRa of Word Searches. Competetive doesn't even cover it! And I love word scrambles, too. Prob from watching my Grandma do Word Jumble every day growing up. Oh, and then there's Wheel of Fortune!!!! My family used to watch that every night and we'd fight tooth and nail against eachother to solve!

All word puzzles - including your good old fashioned crosswords. Plus I'm a suduko addict. It's pitiful.

Logic Problems. Have been doing them since I was a kid and would "help" mom with them,then I started on my own.

Anyone who does these kinds of puzzles is so far ahead of the game when it comes to learning to think and deal with problems. Probably part of the reason kids today have problems thinking for themselves- parents don't encourage the same types of things that ours did. (Except for those of us here talking about it but in general, they have no clue)

I must start my day with the LA Times crossword puzzle AND Sudoku (after I've read the comics). The shame of it is that this is the real reason I subscribe to the paper. I just can't wake up without them.

On a completely different subject, can I just say how weird it is that my word verification here today is "corgiz", as I am a Corgi owner?

We played Scrabble a lot growing up, and I still love it. One of the best word board games around, IMO. I may have to break down and buy it for my Kindle; I put Shuffled Row and Every Word on there already because I like word games and they were free ones! (Yeah, I'm kind of cheap sometimes.) :)

I have Scrabble on my Kindle, too. Yeah, not much reading gets done. LOL!

You all are giving me such great ideas for games. This blog may have been a mistake. I have a deadline coming up!

I love word games and spend way too mcuh time playing them on my iPad. I do crosswords, word searches and always have a couple Words with Friends games going. My fav though is Word Pop (the one with the soda bottle icon not the popcorn icorn).

I'm not much of a word game fan but I do love Every Word. For a good month I found myself using my Kindle only to play it! I've come to my senses now and am back to reading books on my Kindle, but I still sneak in a game every now and again.

I asked for a Nintendo DSi for Christmas just so I could play Bookworm and can you believe it is the one flippin' game I CANNOT FIND! I can find it buy online, but not at the stores for instant gratification.
Have managed to find Jeopardy, though, and Are You Smarter Than a Fifth Grader....supremely fun!

is anyone else stunned by some of the allowed words on "Every Word"? I love the game but after I get the big letter word I often just use the fill in the blank word option...some of those words just boggle me and then I'm forced to look them up in the dictionary...also conveniently located on my Kindle. As a homeschool family we played many many games of Scrabble rather than having spelling lists :-) Way more fun and my kids have great vocabularies...and we still play to this day!
Nanc

I got a Nook color for Christmas, I need to see what games I can find for it ! Hopefully a word search

Peacecat, you need to teach me how to do that--come to my senses, that is! I play way more than I read on my Kindle!

Vickie, I want brain age for DS! I need any help I can get.

Nanc, I'm with ya. There are some words that are just, "Huh?" I always hope they expand my vocab, but most often I simply forget them!

I love word puzzles. I play on pogo.com, they have this game word whomp that sounds just like every word. I also play this game on facebook that is called word drop. you have to connect the letters in a square but they have to be touching. Once you get a word out of those letters it drops letters in their places. Word games are fun because they are so challenging. There is so many things you can do with words.