Blast From the Past Snacks 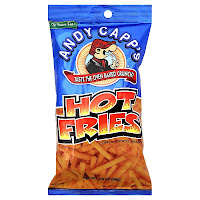 Earlier this week, I found myself at a large gas station somewhere off I-75 in southern . It was one of those gas stations that have a restaurant (or two), a small grocery store (at least it seems like it), and even showers for those who spend most days on the road.
It was a brief pit stop for me as I drove home from . The rental car needed gas, and I had a serious case of the munchies. So I roamed the aisles, looking for snacks. Trust me when I say there was a lot to choose from. It was just a matter of picking between salty and sweet.
I went with salty (as I almost always do), and headed for the potato chips. I was trying to decide between Andy Capp’s Hot Fries or Ruffles Cheddar and Sour Cream when I spotted them.

Them being taco-flavored Doritos. In the retro packaging, too! It flashed me right back to my childhood. I used to eat taco-flavored Doritos all the time as a kid. Apparently they're on shelves for a limited time only, and I knew I had to have them.
I have to admit, they’re not as good as I remember, but buying them was worth the little trip down memory lane.
Is there a snack food that brings you back to your childhood? Or one that you wish would make a reappearance?
Posted by Heather Webber at 5:15 AM

Cracker Jacks!! Who could resist those wonderful (cough) prizes inside?

Cheese puffs! I can eat a whole bag!

Ooo...love the Taco flavored Doritos too! Why did they take them off the shelves anyway? I don't care for the flavors they have now.

I love Ruffles ridged potato chips! They remind me of going to the beach when I was a kid. I know they are still on the shelf but boy they sure do have staying power!

Ok, I think the real trip down memory lane for me is all the old candy they have at gas stations. Like Sugar babies, Red hots, Milk duds, Blow pops, Dip-N-Stix, Bottle caps, etc. I have even seen the old gums like Beechers, Clove, etc.

I love gas stations just for that alone!

Most candy I loved as a child, I dislike as an adult, as they are way too sweet now. I know there was for a short time a potato chip flavored: smoky bacon. Loved that! The modern flavors are mostly not to my liking.

Campbell's Tomato Noodle'O Soup and Sweet-and-Sour Charms Pops (suckers, not drinks). Really, really miss both of those.
And I remember the taco-flavored Doritos. Those used to be one of my favorites, too. I think they changed the recipe formulas for stuff because of nutrition laws, etc., and it really does make a difference in how things taste.

I can't believe you just posted this! I also just found them at a gas station mini-mart. Hope there's a chance they'll return in big bags for a limited time!! Yes, I bought four. That should hold me for a while.

Do you also remember BBQ Fritos? Real ones, not the weird chili cheese or honey one they have now.

There are alot of nostalgic candies available for sale at www.hometownfavorites.com. They used to have other products besides candy but guess they downsized it. Still, it is an interesting site which may spark a memory or two!

I should have had you buy them out of the Doritos and send them to me. I have a recipe that depends on them. You can make it with Nacho Cheese Doritos but it's not as good.

I like all the penny candies that cost, yes, a penny. I miss those days. What I liked most was banana split candies.

Kate, there is something about those Cracker Jacks. And the prize is definitely worth digging through all that stickiness.

Yum, Ellery. I went through a cheese puff phase last summer. The orange fingertips I could do without...

Michele, I love Ruffles (esp. love Lays) with onion dip. It's my favorite treat. All that candy is so tempting at those gas stations!

Aurian, I love chips but smoky bacon kind of scares me! Something I have to try someday, though.

Signlady, I haven't thought about sweet and sour charm pops in years. Are they the ones with the chalk-ish shell?

LOL, Julia! On the back of my bag, it said to look for the taco flavor coming soon in new packaging--so maybe they're really bringing them back? And YES, I definitely remember the BBQ Fritos. Strong flavor--gosh, I remember eating so many of them. I'm a chip junkie.

SusieD, thanks for the site. Lots of great memories there!

Shel, check your local gas stations. It seems to be the place to find them. They're in the "grab bag" size. I'm *very* curious about that recipe!

Dru, darn that inflation! I loved wax lips. Do you remember those? LOL. And pop rocks. So fun.

Have you seen the retro pepsi made with real sugar yet? I am going to get one this weekend and damn the diet!!

Heather--no, not anything on them, just a great sucker that usually makes you pucker! (I love Lemonheads, too!)

You can buy several bags and store them in the freezer. Yep, that's compliments of my cousin's college Home Ec degree.

Cheetos was my favorite. And I still have a weakness for them. So now that I'm back on the Straight & Narrow and losing holiday weight, I make sure I do not succumb. :)

I had some of these Taco chips but mostly bought them for the packaging. I love retro.

One I used to have a lot when I was a kid was called Corn Nuts. Haven't seen 'em in years. My other favs were things like sunflower seeds, cashews, and pistachios. Those I can find :D