Way at the Bottom of the Earth

This week I'm posting on my daughter Serena's new project for NASA. I haven't mentioned this before, but my Doctor of Internal Medicine daughter was a Flight Surgeon for NASA for two years, working along with the other NASA scientists and engineers on the International Space Station. She loved her work, particularly since being involved with NASA had been a life-long dream of hers. I still remember watching Serena sitting in front of the television watching one of the space shuttle lift-offs. She must have been 9 years old. I sensed something "clicked" inside her and lit a flame of interest that has never gone out. It burns still.

Well, after two years of intense effort working on the ISS, NASA announced it was once again accepting applications for astronaut candidates. All applications had been closed for five years. Serena threw her hat into the ring. I wasn't surprised. She told the family: "If it happens, great. If not, I'm already doing the work that I love." That's definitely a win-win. After an entire year of intense interviews and physical exams that went stem to stern--literally--Serena was one of nine astronaut candidates chosen in June 2009 out of over 2500 applicants. Five men and four women. If you'd like to check them out, go to www.nasa.gov and on that home page find the Search box. Enter "Astronaut Class 2009." If nothing comes up, go to the Archives section and search there. It will bring up photos and short descriptive paragraphs on all nine candidates. They are called "candidates" because each new class undergoes two years of intensive training before they can "graduate" to full-fledged Astronauts. 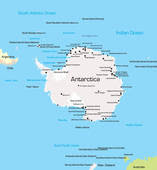 Serena and the others began their training that August of 2009, and it will be completed in late May 2011. Along the way, they've had at least two research trips to Arizona and New Mexico to hike over the mountains with geologists and learn about the various elements found here on earth and on other planets. They also hiked around with the geologists searching for meteorites, since they are the best examples of what elements are actually "out there" in outer space and other planets. And early this summer, Serena was chosen by NASA to join a special team of scientists that search for meteorites at the South Pole. Yes, that's all the way at the bottom of the earth in Antarctica. Apparently, geologists from various international scientific organizations schedule two-month long research trips to Antarctica during the area's summer--December and January.

Why Antarctica & the South Pole? Because that's the best place to spot meteorites apparently, and there are regular sightings--and findings. That's why the scientists have targeted that locale. So---instead of celebrating Thanksgiving with all the rest of us like she did last year, Serena left the day after Thanksgiving for Christ Church, New Zealand to meet up with others on this year's research team to acquire the specialized outer gear required. When all assembled, they flew off to McMurdo Sound, Antarctica. There they have started a week-long survival training while the Supply folks start gathering the cargo that the two separate teams of researchers will need while out in the "field." The field being the huge expanse of ice. They'll live two

to a tent where they will sleep and cook their food---out there on the ice. They'll be out in the field for 45 days consecutively. Apparently during their "summer," most of the winter snow has melted from the top of the ice leaving the permanent bottom layers. That's why it's easy to spot meteorites on that blue white expanse of ice.
The scientific expedition posts a blog every day talking about what the research teams are doing. Each researcher takes a turn. Serena has already posted on 12/5/10. I did notice that the photos posted had mislabeled Serena and her tent-mate, Melissa. In case you check it out, Serena is wearing a blue snow jacket. :) Moms can always find their kids, no matter where they are. Here's the link below:
http://www.humanedgetech.com/expedition/ansmet1011/

How exciting for Serena. I'm sure she'll have an interesting time at the south pole. I look forward to hearing more about this trip & hopefully a space flight or 2 as well.

How utterly cool! We had a couple meteors blaze across our area this past spring. As cool as it would have been to see or find one of those, I can only imagine how excited your daughter must be to be a part of this expedition.

Wow, that is so great! Being an astronaut, who has not dreamt of that (I did after watching Star Trek as a young girl and falling head over heals with Captain James T. Kirk). This is just, WOW!

That is so cool about your daughter.

What an exceptional woman Serena is! What an amzing adventure -------->AND hard work!!!!
Ritaestelle

How cool! Tell Serena to keep an eye out for my nephew Gary McClanahan, who is out there driving equipment to keep all things moving along.
I have been enjoying all the pictures and tales he is sending 'home'.
Small world!

i am so jealous! my cousin is at McMurdo and has been sending back lots of pictures and i want to go too!! LOL tell her to tell Gary McClanahan 'your cousin, Tara, says hi' that will mess with his head :)


hope she had so much fun there!

What an interesting blog! I am definitely going to go to the site and check out Serena and her crew. and yes, moms always know their kids, no matter what they are wearing.
Caryn in St.Louis

Oh Maggie, you must be so proud! That is awesome that Serena was picked in the Astronaut class and now she is on an exciting adventure in Antarctica. How totally cool. I checked out the Nasa website. I love Serena's quote below her photo.

This is so exciting! Serena must be be thrilled to have been chosen, first for the astronaut team, then for this adventure on the ice. I look forward to reading more about her discoveries and trips.

How cool! I know you are one proud mama!

How exciting! You must be bursting with pride. What a dream come true!

I am so very happy for her and so proud of you for helping her along the way. And I know you did because that's what moms do. Will keep Serena in my prayers for a safe "summer" in the DEEP south :) Congrats to the both of you.

Kim---It certainly will be exciting whenever they get a "ride." Who knows when that'll be. There are a bunch of astronauts ahead of them.


Heather---Keep checking that website during Dec & Jan, bec they'll be posting photos of their meteorite finds. Apparently they find them regularly.

Aurian---Hey, I was one of those original Trekkies--with the original series. So, you bet I had both "pairs" of girls watch all the Star Trek episodes. By the time Serena & Maria were old enough to watch, they got hooked, then The Next Generation came out on TV---and they were devoted Trekkies & Trekkers after that.
:)

Thanks, Ritastelle---I'm really proud of her. :)


Wow, oldentimes! That is so cool! I'll email Serena. Maybe we can see him on the weblink that I posted. Is he based in McMurdo Sound?

tarajo---Wow! That is so cool! I don't believe your cousin Gary is there at the same time. I'll email Serena tonight. She is on a week long survival training with her team so I'm hoping she'll get a chance to check email before they head to the "field" on Dec 10. Once there---no email, no calls. Apparently they can receive texts but can give no reply.

Caryn---Definitely check it out. They'll be leaving for the "field" Dec 10th. then I guess we'll be hearing about what they're finding each day


Miki---yes, she is, for sure. And she's really glad their outer wear works so well. :)

signlady & Bookwoman---You're both right about that. I am VERY, VERY proud.


RitaB---Thank you so much. I' praying she stays safe, too.

Maggie, that is one real life Wonder Woman you have for a daughter. I hope she reaches the stars and brings you home a piece of them.

Thank you, NoraA. She's always been an "achiever." :) Plus, she was bitten by the space shuttle bug early on (after watching myriad episodes of Star Trek. :) Mom's fave. They loved it. And all the other Trek "iterations." Like The Next Generation, Voyager, Deep Space Nine. Loved them all.