I've just given my editor the manuscript for the fifth book in the Orchard Series. It's so new it doesn't even have a name yet.

The first four books in the series span Meg Corey's first year in the small New England town of Granford, from her arrival through the harvest of her first apple crop. It's been a hard year for her: not only did she move to a new and unfamiliar place without any friends or any idea how she's going to support herself, but she's been involved in four murder investigations. You'd think a quiet corner of Massachusetts would be relatively safe, but apparently that's not the case where Meg is concerned. In A Killer Crop (due out December 7th) she even had to clear her mother from suspicion of murder.

Of course, there have been happy experiences along the way. She's found a slow-growing relationship with neighbor Seth Chapin. She's made friends. She's helped to start a new restaurant in town. She's learned a lot about herself and what she's capable of, and she's beginning to feel at home in Granford. If it weren't for those pesky murders that seem to keep happening, things would be looking pretty good.

The most recent manuscript takes place in winter. The harvest is over, and Meg is adding up the figures and trying to decide if she can afford to stay in Granford, and if she wants to stay in Granford. She's found out that farming is both hard and uncertain–one bad storm can destroy a year's worth of effort. She's learned that people in a small community can be both wary and welcoming. She's an outsider with historic roots in the area, and she's discovering what it means to become an insider. 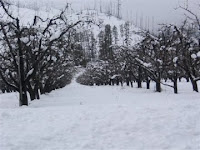 In a way the new story highlights both the good and the bad sides of living in a small town. People there have long memories. Once they accept you, you become part of their history–sometimes for centuries. That's the central story of the new book: something that happened over two hundred years ago enters Meg's current life, and affects her decision about her future.
A Pew Research Center Survey from 2008 says that almost 12% of Americans changed residences between 2007 and 2008. Most Americans have moved to a new community at least once in their lives, although at the same time, nearly 40% still live in the place where they were born. How about you? Have you moved around during your life, and been the "new kid" at least once? Or do you still live in the same town where you grew up, and everybody knows your name?

Enjoy Sheila Connolly's December release, A Killer Crop, where she manages to include mother-daughter relationships, old and new romances, and Emily Dickinson! For the record, she has lived in seven different states and has moved more times than she wants to count.

To win a signed copy of A Killer Crop simply leave a comment below (make sure we have an email address for you too)
Posted by jbstanley at 12:01 AM

How very exciting!!! FIVE BOOKS! Most cozies only make it to three. I love your covers too.

would love to win a copy!!!! I think the cover is also very amazing, I love autumn and that is the best picture of it. Wahooo....

I moved around a bit when I was younger (dad was in the Air Force), but not so much since then. I'd love to live in a small town--something I haven't done yet.

Congrats on the new release!

Ah, another book put on my wish list!! I've lived in the same house for 46 years and expect I'll stay here forever.

Congratulations on the new book! Having moved around quite a bit too, being accepted by a small town is the hardest. But it is harder to get to know people in a large city. Choice your poison!

Reading your series makes me want to own my own Orchard. And I'm not even an out-doorsy person!

Thank you for the laughs!
Zaida
butterflymusic20@yahoo.com

PS. Hoping to win a signed copy of Killer Crop!!

While I've spent most of my life here in Brooklyn (in various different neighborhoods) I've also live in Florida (Mommy dearest dragged me down there so she could get a divorec in the 1950's)and I even spent time living with a cousin on base at Ft. Meade in Md. I find myself losing interest in travelling the older I get. If I can't get there by car I don't go.

I do love the lovely fall colors on the new book cover also.

Congratulations on the new book, can't wait to read it! I've only moved once and that was only a few miles from where I grew up, so luckily I never had to be "the new kid".

I still live on the same street I grew up on! We moved down the road from our old house when I was a sophomore in High School. I still live on the same road & love it. I couldn't imagine livng anywhere else. It's a prety quiet neighborhood & we all look out for each other, that's what makes it so special & something you don't see much today.

My father had a habit of changing jobs every few years, which is why I ended up in so many towns and new schools. I hated it, but even after I married we went through another few states. We did live in Swarthmore PA for 15 years--and that's a perfect small town--but once again job needs (i.e., needing a job!) led us to move to Massachusetts seven years ago.

But since I have so many ancestors from Massachusetts, I've always kind of regarded it as my home. That's why it's such a treat to write about a place in the state--one with plenty of ancestors!

I've lived in only two states( PA and NY) and DC but moved within the cities a lot until settling into this home nine years ago. I think moving into different city neighborhoods is sort of like changing small towns.
Our previous next door neighbor was an elderly chinese man who wore beautiful silk pajamas at home all day, even in the yard. He had lived in the area for more than 40 years, and owned a business and he knew everyone. The next door neighbor in this house has raised ducks for more than 20 years. There are a lot of large orthodox jewish families who make a habit of walking by her house with the kids on the way to temple on Saturdays.

We are going to be moving this spring, in fact, and I am both excited and anxious.

And I love Emily. One of my favorite quotes of hers is "A word is dead when it is said, some say. I say it just begins to live that day. "

How exciting a new book to look forward to..I moved a few times as a child, but as a married adult lived in Toronto, Edmonton, back to Vancouver and then moved ever 18 months, then lived in 1 home for 18 years..

I am interested in reading about life in Granford and especially finding out how Emily Dickinson fits in the story.

Thanks for sharing with us Sheila. I'm happy to meet you and am looking forward to reading your books. It sounds like Meg leads an exciting life!

I have moved to a few new towns along the way, but I've been in my current town since 1989 and don't have plans to move anytime soon. Sheila's Orchard Series sounds great. I'd love to win "A Killer Crop." Thanks for the chance.

I would love to win A Killer Crop too. I'm a little behind on the orchard books, but just want to mention, (in case you are checking back), that I just finished Fundraising the Dead and really enjoyed it. Look forward to hearing more about Nell someday too! Thanks!
JHolden955(at)gmail(dot)com

I've lived in the same borough and state my whole life, but moved five times during my childhood.

I've lived in my apartment complex for over 20 years.

I'm looking forward to reading the next book and I would love to win A Killer Crop.

We moved from Missouri to Colorado when I was a kid... not so bad. Then I moved to Virginia to work for the Government... again not so bad. Now I am retired and we moved back to Missouri... not so great at this stage of my life.

I'm looking forward to getting your new book. You really hooked me in on it--it sounds like a great book.

We moved from Missouri to Colorado when I was a kid... not so bad. Then I moved to Virginia to work for the Government... again not so bad. Now I am retired and we moved back to Missouri... not so great at this stage of my life.

I'm looking forward to getting your new book. You really hooked me in on it--it sounds like a great book.

I've read something before about your books, and was intrigued by the story line. So you are already on my try out list. Great news that there are already 5 books to look forward to. I like the cover too, which is a huge plus for me.
I've moved twice in my life, and am not looking forward to leave this house. The though of packing and moving al my books is staggering!

You mean moving every couple of years isn't normal? I am Air Force Brat. Until the 7th grade I thought everybody went to a different school system every year.

Since dad retired, I've moved a little less, but work did move me from SC to CA and back in the last 10 years.

I'm already for book 4. The first 3 books were fantastic.

And the winner is...Helen Kiker! (Based on an impartial drawing by my husband.) I'll be sending her a copy of A Killer Crop (not even in bookstores yet) as soon as I get an address from her.

Thank you all for your comments. My orchard now consists of four trees (all different varieties), and I'm seriously considering a pair of quince (quinces?) in the spring.

And Emily is a very distant cousin, as are most people in New England, apparently.