Cooking through the Grief 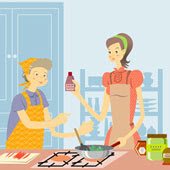 Thanksgiving has always been my responsibility. My siblings and I started rotating holidays years ago, when our mother decided we were all grown up enough to assume the duties. Somehow along the way the rotation stopped with the turkey dial pointing toward me. I really didn’t mind.

This year, however, because of the recent passing of my husband, I was dreading it. The thought of celebrating without my Greek saddened and terrified me. We had been such a team -- planning, shopping, preparing, and cleaning up together -- that I couldn’t imagine doing it without him.

In stepped my children and step-daughter, who performed like the troopers they are.

Instead of purchasing a prepared bird complete with mashed potatoes, gravy, and stuffing, as I was ready to do, they decided we should make everything from scratch. So we started early Thursday morning with the turkey, then moved on to a homemade gravy mix, homemade stuffing using gluten-free bread, and skin-on smashed potatoes. Our last task was preparing homemade apple crisp, which we popped into the oven just as the rest of the family descended.

Sadly, the apple crisp was forgotten in the crush and nearly burned up. But it was definitely crisp.

Everyone brought a dish and a dessert, so we had plenty of food to feed the crowd. We came together as a family, prayed together for our absent ones, ate together, and, as promised, the kids cleaned up afterward. At the end of the day the four of us were exhausted. We collapsed onto the sofa together with a contented sigh – and then realized we’d had a good day. Good days are hard to come by when grieving.

Cooking together was our therapy. It allowed us to work as a team, sharing laughs, concerns, and hopes, even as the kids learned kitchen skills that will last them a life time. I was extremely apprehensive about undertaking the meal, to be hone

st, but now I’m so glad we did. One holiday down – and many more to go. I think maybe we’ll try baking as therapy for Christmas.

What do you think about cooking as therapy? Do you enjoy working in the kitchen with family or friends? Does baking relax you? Or would you rather order the food and let someone else do the work?
Posted by Kate Collins at 5:50 PM

Baking is definately cathartic for me. I bake with my young children at least weekly. I hope that I'm creating fun traditions for them as my mom did for me. It's also comforting using mom's recipes and passing them on.

I think it was an awesome idea! My grandmother from Norway used to sing a little children's song "one finger one thumb keep moving...to chase the blues away" when she was missing her family and homeland or just feeling blue. My mom passed the idea down to me. I say go for the baking! And if you have too many to eat, just make up little trays and enjoy the experience of giving them out to others.

We may not know you personally, but remember, you are loved by many! Hugs! <3 Kristen Steele :)

Working in the kitchen is something that I enjoy to do. My youngest daughter (10) helped with with everything this year, from the Monkey Bread breakfast through the desserts. We don't have family near us, but working in the kitchen with my girls makes the work much more pleasurable. We're looking forward to baking Christmas goodies next!

Baking/cooking is certainly great therapy. For me it always helps me channel my Granny, who I especially miss at holidays. My youngest son (he's 13) likes to help in the kitchen. This year we made a couple of batches of special cookies. I wouldn't trade that time for anything. And if I don't want to eat all the high calorie goods - well, we're an Army family and there are always single soldiers who would love something home baked.

I'm glad that you decided to do the big meal and that it turned out so well for you. My thoughts are often with you.

For me, it depends on how immediate the grief is. In the first throes, I can't manage much at all. But cooking is definitely part of the healing process. I am a baker, though, not a dinner-maker. I rely on others for that, and I provide the desserts.

I am more of a baker than a cook - but I sure do love the eating part!
On a side note Kate, Eventhough we don't know each other, you were on my mind this this Thanksgiving and I am glad to hear that you had a nice (and theraputic) holiday with your family as support!

My sympathies for the recent loss of your husband. I am so glad the cooking and time with your family was fun and theraputic for you!

I love cooking and making things. Trying new recipes especially. IF it is something I have never made before that might be challenging to do - all the better!! I feel such a sense of accomplishment when it turns out great. Especially if I get to share it with others. I LOVE cooking with my kids too. At ages 9 and 12 they are so eager to learn and soak it all up. It is so much fun being in the kitchen with them. When we are in there cooking together everything else just sort of goes away.

I am happy you decided to try new traditions because that's what we did.

My Mom always hated cooking holiday meals even though she had my sister and I to help. I have always tried to make holiday meals joyful--like this year--I got sick but between DH and I, our youngest son, and some grocery store baked goods we had a Happy Thanksgiving--to us it's about giving thanks to God and enjoying family and if it isn't THE BEST DISHES--Mom had many long, complicated HAD TO HAVE recipes--we just wanted her to be happy--funny thing, she passed in October 2002 so I always remember--good for you Mom--someone else is making your fresh coconut cake--lol!

Kate, I've been thinking of you over the holidays and am glad to hear you were able to start a new tradition with your children. Cooking makes me feel more grounded and it reminds me of favorite times with family and friends who are not here any longer. I've always enjoyed baking too and if I make too much it is nice to share with those who do not have family close by. Cooking relaxes me as does most anything that I can do with my hands. It gives me a feeling of accomplishment that I just don't get from my work. I hope your Christmas baking helps you make it through the holidays.

I think cooking as therapy work because you're creating a dish, a meal that is filled with love. A lot of good talking occurs when people are sitting around a kitchen table or stirring a pot or setting a table, keeping our hands busy but our minds open.

being Italian means you cook and bake for therapy, for fun and for family.....it brings the family together as needed.....this time of year when I can't garden there is cooking..besides with family the task of cooking definitely keeps you from being alone....Christmas baking couldn't help but be just the right therapy....wishing you and your family a wonderful holiday season together!!

THis year, none of the 'family' could make it 'home'. The daughters and families have almost always been able to share this one holiday, even though the last few years it may have been at one of their homes.
We have always shared the cooking/cleanup chores and had a wonderful time together. I felt so bereft!
We were invited to someone else's home for the Thanksgiving day meal.
The meal and friendship were wonderful, don't get me wrong, but it was not Thanksgiving.
Friday morning I hit the kitchen, homemade rolls, roast pork loin, veggies, ctanberry sauce...woohoo, that was more like it, even though the girls and families were not here to share with us.
Yes, cooking was the therapy I needed. Perhaps it is time for Hubby and I to re-evaluate, understanding that with far flung family it is not possible to have our traditional get together, but somehow, it felt like we were all there, just because... we, too, will be building some new traditions in the future.

Your comments and thoughts are so touching. To have so many friends out there is an awesome feeling. I truly feel uplifted. I'm going to make sure my kids read all these posts, too.
Oldentimes, I'm so glad you had a good Friday. Change is incredibly painful. Hopefully, good things will follow.I feel blessed to have family within an hour or two drive away. It has to be difficult when family is far flung.

Yes, cooking is therapy for me too. Over the years I learned that doing something is almost always better than doing nothing.
I am really glad that you and your daughters did this together, I bet they needed it as much as you did.

I, too, like cooking dinner more than eating it. It was three of us this year, and I made too much - we just don't/can't eat as much as we used to, so I'm thinking what I need to change when we have turkey again for Christmas. And thinking about what we want to do for Thanksgiving in the future if our daughter can't make it home.

Change is always hard. Thank goodness for family and friends, near and far, to help us get through! :)

I'm so glad you had a good day on Thanksgiving. Your plan to bake as therapy for Christmas sounds like a good one.

I think anything that lets you forget for a while is cathartic, and the added benefit of doing something with people who understand you only makes it more so. It's like being able to drive with a comfortable silence... being around people you love and who love you, doing something routine, yet special and important, is comfort in itself.

baking/cooking is very therapeutic for me. I'd rather do it by myself, it leaves me alone with my thoughts and to work through things as I put together whatever I'm baking/cooking.

Cooking is my avocation--it sees me through rough spots and soothes me. And cooking with kids is a joy. This year we gathered at my daughter's house, where the kitchen is big enough everyone could have a corner to cook in--and we cooked together.
Kate, even those of us who do not know you, have grieved with and for you. Your Thanksgiving was a small but important step toward healing--I'm so glad you did it.

I definitely think cooking as therapy, Kate. Especially baking. I look forward to this time of year so I can make my holiday specialties. All four of my girls really enjoyed joining me in the kitchen from their earliest years. I taught them how to cook and allowed them plenty of opportuities to practice. So that they could prepare all the holiday goodies as well as the Thanksgiving feast. They've all developed into wonderful cooks. And we created a lot of holiday memories over the years. Cooking and baking with loved ones is a joyful activitiy.