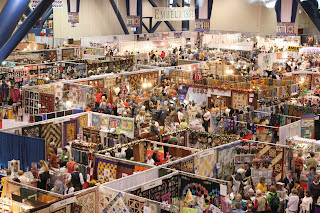 I have done many book signings since my first book was published in 2004. Some of them were great and some too painful to even want to think about. But Thursday and Friday this past week I signed all my books at the International Quilt Festival in Houston. I was hesitant to accept the offer to sign because I have been to "festival" as it's called, many times as an admirer of all things art, quilt, fabric, thread or craft related and thus I knew what to expect--big time fatigue. More fatigue than I can handle right now. But because I love this event so much and because the vendor would be doing all the ordering, schlepping of books and money taking, I decided to accept. I'm glad I did.

This is the largest quilt festival in the world. I met people from Belgium, Germany, France, England and Brazil to name a few. I chatted with folks from all over the country. And I signed book after book after book. I signed constantly and though I wanted to get a look at the competition quilts in particular (because they absolutely blow me away) I never got the chance. I was too busy and by the end of each day too tired to do anything but walk to my car. Just to give you an idea, I gave away about 1000 bookmarks!

If what I heard is true from the attendees, those of us who are older are turning to e-readers at a very fast pace. We love our paper books, but we are downsizing for retirement or we have too many books and no where to put them. Another fascinating thing I learned is that moms of preteen girls buy cozies for their daughters. The lack of on-the-page sex, blood, profanity and gore appeals to both the moms and their daughters. This is a market I didn't know existed. Moms and daughters share their cozies--I even had a mother/daughter pair come and pick out books together, ones they would swap. And they love recipes and crafts and the adventures that our characters take them on. That was so refreshing to hear!

I also saw my next door neighbor--didn't know she was even going!--and a nurse I worked with for many years. And through the magic of Facebook, who else showed up but a guy I graduated from high school with. I won't tell you how many decades ago THAT was! His wife is a textile artist and that's why they'd come to the show. He stopped by to say hello and hear me sing. Yup. That's what he thought he'd read on Facebook--that I'd be singing, not signing. Now that would have been funny ... and a great disappointment to many.

How about you? What great fall festivals and shows and trips have you been to? Or are going to? Or even WISH you were attending?
Posted by Leann Sweeney at 2:00 AM

Hi Leann,
I'm glad you had so much fun, and of course so many fans! I am always wishing I lived in America when I get those invites to weekends or things with my favourite authors. I really want to go some day to a big convention with lots of authors and books books books.

It sounds like a lot of fun, Leann. I must admit that not only did I share my cozies with my daughter when she was a pre-teen for the reasons that you mention, but also when she was a full-fledged teenager. Why rush into anything, right? :-)Now that she's in her twenties she still enjoys reading them.

Congratulations on the great signing experience. Having been to the Quilt Festival a couple of times, I know how disappointed you were to miss those quilts! They're always amazing.

There are two International Quilt Festivals a year, a summer one in Houston (by far the largest), and one on the spring. The spring festival has been held in Chicago for a long time, but this coming spring it's moving to my neck of the woods, Cincinnati. I'm thrilled beyond belief that I won't have to drive or fly six hours to attend.

Aurian, one day I hope you will get here!

Laurie, you are just confirming what I heard and I think it's wonderful. Not everyone loves Harry Potter!

Karen, so glad you'll get to see quilts and shop in your neck of the woods. The artistry of quilts is so fantastic. In Texas, driving 6 hours wouldn't even get you out of the state! :-)

I'll bet it was exhausting, but I'm glad that you attended. I think that the singing part is great. LOL. I am sorry that you didn't get to wander the show. I've missed every yarn fair this year due to wonky knees. It won't happen next year!

It sounds like you had a fabulous time! I would love to go to a book festival in the UK, there are some fabulous mystery ones, but they are "by invitation only" and I don't think I'd ever make the cut!

I remember my first quilt show and I traveled to Vermont for it and I was just blown away at the quilts on display.

Glad you had a good book signing.

The IQS in Houston is one, if not the, largest quilt shows in the world. It's held in the Houston convention center, and takes up the equivalent of three or four city blocks. The quilt display is nearly half of that, and showcases hundreds of the most beautiful quilts conceived by international quilt artists. Since it's a juried show, only the best are exhibited, and it's well worth traveling to see.

In addition, there are some 400 vendors selling wares at the shows. I've been one of the vendors once, and that was plenty!

Leann---I'm so glad you went to the quilt festival. Last weekend I signed at the huge knitting expo STITCHES EAST in Hartford, CT, and have signed at other large fiber-related conventions. They are ALL wonderful opportuities. I recommend you attend next year as well.

It sounds like you had a wonderful time and you had to be exhausted after all that! I hadn't thought about having my daughter read the cozies, but that's a brilliant idea!

I never thought of that before, cozies for my daughter. She is 7 right now, loves to read, sees me reading and asks what I am reading at any given time. I can see her trying a cozy in the future along with the paranormal mysteries I read, too.

Not sure of any festivals this year, but next January or February I plan on making the Oatmeal Festival in nearby Lafayette, CO.

No festivals yet this year. I WISH I could have been at Houston. And one year (probably not next), I will be. Our local church bazaar is this Saturday, and that's usually the perfect speed (slow and easy) for me.

The quilt show sounds awesome. Here in Pennsylvania my mom and I usually hit Quilt Odyssey in Hershey every year. It is a relatively small show, but full of lovely quilts (they always have a collection of vintage quilts that makes my heart sing.) Sadly, we weren't able to attend this year. I sure missed it though and will be sure to make it next year!

In our area there is "Celebration Village" which raises funds for our local Sanctuary Hospice House. Huge Christmas market with vendors selling all different kinds of things. Fun time!

I'd love to go to Houston for that show or to Paducah for the quilt show there! Wow!