Tour's Over, Now Back to Work...but first, Movies!

The Fatal Four had a fantastic tour in Texas last week. Thanks to all of you mystery readers and fans for turning out for our signings in Houston, San Antonio, Ft. Worth, Round Rock (Austin area), and Denton (Dallas area). The weather was perfect, in the upper 80's, which is mild for Texas. We were in the car a lot since our tour locations were spread out and Texas is a BIG state. But, we discovered the secret to a successful Road Trip: frequent stops for food. And caffeine. Kolaches at the Czech Stop were a big hit.

back in Colorado and back to work doing revisions on the Kelly Flynn mystery that will be published June of next year. But, first---I wanted to alert all of you to a couple of movies that I saw a few weekends ago. I wanted to share and see what your comments were---and---what new movies you've seen that you've enjoyed.

First--The American with George Clooney. The setting is mostly in the picturesque Italian hilltop towns, where winding roads turn back upon themselves as cars slowly climb toward their quiet villages. This is a suspense flic, and Clooney does an excellent job, maybe his best work. He's a hit man who's been in "the business" quite a while 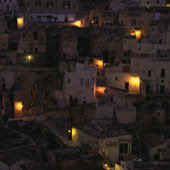 apparently. And now, he's having second thoughts. The entire cast is excellent, and the cinematography is spectacular. The scenes are shot with an artist's eye, as if each could be framed and hung on a wall. And the director uses those beautiful scenes to build up a remarkable tension. You are constantly looking over the characters' shoulders for them.

Second--The Town with Ben Affleck as main actor and director. Affleck actually wrote the script and produced as well. The Town refers to the tougher-than-tough section of Boston which produces more armed robbers and bank robbers than any other area of the country. Affleck took meticulous care to reproduce the atmosphere and attitudes of the townfolk he remembered from his youth.

This movie is one of the best, if not THE BEST, action/thriller movie I've seen this year. Affleck has got a definite winner here. The actors in the cast are spot on. And Affleck himself has totally redeemed himself as an actor in this marvelous tale. He's wiped all memories of those forgettable flics of the past few years. He's done excellent work here. And he's surrounded himself with some other fine actors like Chris Cooper. If you only get to see a few movies this year, try to make The Town one of them. As with The American, there is violence (shootings).
Have any of you seen these two movies? What do YOU think? What movies have you seen recently that you enjoyed?
Posted by Maggie Sefton at 12:01 AM

I wanted to see both of these movies but missed them, so I'll be looking for them at the video store, or Netflix which I'm contemplating. Is Netflix a good service to use?

It sounds like a great service bec you pick the movies you want and they arrive in the mail. That's probably why I've heard they're eating Blockbuster's lunch. My daughters use it and it is definitely convenient. I haven't signed up only because I still like to see movies on the big screen. I like going into that dark theatre and seeing it larger than life & being totally swept up in someone else's story.

The last movie I saw was Iron Man 2. Sooo good! :) I still rent from blockbuster. :)
Krista

I haven't been in a movie theatre in years. I live with my Netflix. I love the convenience and the selection. I've only found 2 movies I couldn't get on Netflix. Right now I'm on a Midsomer Murder kick.

I always enjoy your movie reviews Maggie. I have not seen either movie, but plan to. I really enjoyed the trailer for The Town. Looks really intense. The other main actor in it (not Chris Cooper, who is always great) was in the Hurt Locker and I was really impressed by his acting in The Hurt Locker. So, it sure looks like a great cast.
Congrats on the Texas tour too. Sounds like it was a fun time.

I love that Iron Man series. I saw the first one to give a try, expecting it to be like a lot of the Marvel comic flics--lots of action & engaging characters. But Iron Man gave you even more---action galore + great characters but also---lots of witty dialogue. Ooooo, that gets me every time. Good writing, clever dialogue, and I'll follow you anywhere. :)

That sounds interesting, Mare. I don't remember seeing that title in theatres. Is it an indie flic or tv series or PBS?

Linda---Oh, I bet I know which one you mean. The actor who played Affleck's character's oldest friend from childhood, he did a wonderful job. As did the detective who's after the gang and the girl who throws a wrench into Affleck's game plan to "never have anyone to worry about losing." Good flick. Order on Netflix as soon as you can. You won't regret it.

This is making me crazy. We went to the movies last month. My mum-in-law was just out of post-op re-hab but still wheelchair bound and we took her to a movie to show her the wheelchair didn't mean she couldn't go places. It was a comedy, to give her a laugh. She enjoyed some of it, nodded off a couple times. I remember all that - but I can't remember what the movie was.

It's making me crazy.

Laughing at that, Lisa. At least your Mom enjoyed it. And she grabbed a quick snooze. :)

Thanks for the reviews, it's always nice to have some recommendations, just in case I ever get to actually see one. :-)

Merry Lu---You can always order from Netflix if the cinema complex is far away. Some people don't like the hassle of standing in line for tix, I understand that.

I love some of the movies on Lifetime Movie Network. There was an excellent one Sunday night, called "Lies in Plain Sight." It was about a young girl who kills herself and her cousin, who is blind, tries to figure out why.

Thanks, Maggie. I do love to go to the movies (and where I live, we don't have too much in the way of lines). Netflix is great, especially for people like me who have to drive a ways to the theatre (and we don't have a movie rental store in our town). I'm looking forward to getting something so I can stream to my TV.