My mom was a firm believer in the amazing powers of apple cider vinegar. If we had coughs, she mixed it with honey and we sipped it. If we had sore throats, we gargled it. We didn’t buy expensive hair conditioners. We poured vinegar in a cup, added water, and boy, did it make our hair shine. Once, I had my head under the faucet and forgot to get the vinegar out, so I reached blindly into the cabinet, pulled out a bottle that felt right, and doused myself with it. Boy, did my hair shine that day, too. I’d grabbed the corn oil. It took four shampooings to wash that oil out.

My dad used vinegar as a deodorant because he was sensitive to store bought brands (probably the aluminum in it). We also used vinegar after washing our faces to combat oily teenaged skin.

Lately I've been reading articles on the amazing powers of vinegar. What was old is new again. Go figure.

Baking soda was another favorite home remedy. My mom swore by it for acid indigestion, to whiten teeth, clean out calcium build-up in the coffee pot, and as a scouring powder. It also worked as a paste on bee stings. 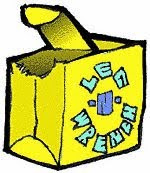 The great thing about the old home remedies was that they didn’t harm the environment, although no one knew that back then. People had no idea what lay ahead for the world – all the toxins in the air, water, soil, and food supplies. All they knew was that their trusted remedies had been passed down for generations for the simple reason that they worked. No commercials needed. Sadly, there wasn't much money to be made in vinegar and baking soda, so they were buried under the avalanche of modern products, most of which are turning out to be carcinogenic.

Do you use any old-fashioned remedies? What’s your favorite tip for using a natural product?
Posted by Kate Collins at 12:01 AM

No new tricks - but my daughter has been using vinegar for cleaning for quite a while. She uses it because it's a lot cheaper than buying cleaners. I'm not crazy about the smell though - it's a little intense, but it does work. :)

I use white vinegar in my coffee pot for cleaning, in the laundry, on windows, on floors (it's cheap tile), countertops. I haven't tried baking soda in the coffee pot itself, do you just let it soak for a while then rinse?

I did know about baking soda on bee stings (I swell up like a balloon when stung).

And Murphy's Oil Soap is my best friend :-)

Well, this isn't exactly a home remedy but it's a golden oldie. My mom swore by Vicks Vapo-rub. Head cold, chest cold, flu, bronchitis - all got treated the same. Heavy coating of vapo-rub smeared on the chest, covered with a folded dish towel (to hold in the warmth), followed by one of Dad's tee shirts, followed by our pj's. Oh, and a good smear across the upper lip to clear the nasel passages. If that didn't cure you, nothing would.

My Mom always made a cough syrup from brown sugar and onions. Just slice up onions (cooking is best) sprinkle with brown sugar -- and a couple of hours later you have this vile syrup. Really horrible taste, but it works better than Robitussin.

White vinegar gets out those dark deodorant stains left in light colored shirts.

I use vinegar to clean with and baking soda on all bug bites. We also brush our teeth with baking soda best whitening "toothpaste" out there cheaper too.

I've been using baking soda and vinegar for various chores all my life. Recently at a restaurant I got a new idea for cleaning a coffee pot. The waitress put soapy water and a few ice cubes in it, then gently shook it around so the ice cubes scoured the inside of the pot. Worked great.

We also used the "vinegar hair rinse" growing up. Baking soda at times was used for brushing our teeth. My mom also uses vinegar for cleaning. When I worked at a fast food restaurant during high school and college we used ice cubes with salt and shook it around to clean the coffee pots. We didn't use soapy water with ice cubes, which probably works just as well, but instead put a handful of salt in with the ice cubes.

Apple cider vinegar is also great for clearing rashes and for insect bites. I kept some in my clinic when I was a school nurse.

My mom always swore that gargling with warm salt water would clear up any sore throat.

What a great post. I'm going to buy some vinegar and baking soda today! And I'll try the tip that Leann said about using apple cider vinegar for rashes. I have some type of rash on my arms/stomach...must be allergic to something, but I have not figured it out yet. I'll try the apple cider vinegar. Thanks Leann, and thanks Kate for blogging on this topic!

Here's another tip for vinegar and baking soda -- clear a clogged drain with them. It won't hurt your pipes and it's non toxic. If that doesn't work, stuff the drain as much as you can with baking soda and then pour a kettle of boiling water down down it. Works like a charm.

My mom had a booklet on vinegar uses. Wish I still had it.
My solution for dark underarm stains on white shirts was to switch to an aluminum free deodorant. It's not the sweat, apparently, that causes dark stains, but the interaction of sweat with those metals. I've discovered a great lavendar scented deodorant at the health food store, Alba is the brand. No more yellow stains, and the product works great.

Salt water gargle really does work for sore throats -- but I can't get my daughter to gargle with it. She says it makes her sick. (And I said, "Don't swallow it. Duh.");-)

Vinegar and baking soda work great together to clear out minor drain clogs. Just pour the baking soda in first, then pour in the vinegar it foams up and clears a minor clog fast.

We use the Apple Cider Vinegar to clean our rabbit cage.

I have been cleaning green for years. Vinegar may not smell good but it works wonders, and kills most germs.

I still use some of those old fashioned remedies my Grandmother used. Baking soda paste for bee stings. Also gargling with warm salt water.

I also heard about the ice cubes in either soapy or salty water in coffee pot. Works.

My grandmother also had home remedy for sore throats. A little bit of whiskey with sugar dissolved in it. It worked. The whiskey's alcohol numbed the pain and the sugar guaranteed that kids used it. Grandma only used whiskey for "medicinal purposes."

I use baking soda for mosquito bites - also used it for poison ivy rash.

As a child I used baking soda in lieu of toothpastw - now I buy the Arm & Hammer baking soda aging toothpaste (not sure if is helps you age or to prevent aging LOL).

Also as a child my mother used Vaseline as chest rub for colds & sore throats.

I use apple cider vinegar mixed with water (equal parts) for a facial toner, hair rinse, and deodorant. (No more stained clothes from deodorants.) So happy to replace the toxin-filled commercial products with this simple mixture.

Helen, that is too funny. Aging toothpaste. Sounds like it's getting old. LOL.

My mom was also a fan of Vicks Vaporub on the chest, under the nose, with a warm piece of flannel around the throat to keep it warm. I can't smell Vicks without thinking of my young years. Amazing how closely scent is tied to memory, isn't it?

My mom always mixed up honey, whiskey and lemon for sore throats!! Yummo! Vicks...ugh! I hated it, my sister loved it :-) I have been using Bragg's Apple Cider vinegar and love it. they have a pretty interesting website that has a ton of stuff to do with vinegar. If I'm not mistaken it is www.braggs.com I know some people make a drink out of it but I'm not there yet....though I do love it on my french fries!!

~Vinegar was my Grandma Violet's cure-all for sunburns and chigger bites.
~She also rubbed sulfa on us before we went out berry pickin or fishing to keep the mosquitos away.
~Jack Daniels and honey for a sore throat and racking cough....

I love vinegar for cleaning windows and clearing hardwater from everything chrome, especially the showerhead.

My Sis and I used to give ourselves facials by applying egg white, letting it dry while trying to keep our faces expressionless. Eventually one of us would laugh,then we would make faces and laugh at the cracks.
An Italian friend suggested I should put olive oil in my hair which was dry from swimming. I later found out she meant a teaspoon instead of a half-cup. I have very short hair. Took a long time to get that out!
My Nana had us soak our feet in epsom salts and my Dad still uses it for aches and pains. Now it comes with a lavender scent. Nana put calamine lotion in the fridge before applying it to our bug bite and poison oak rashes. I did that for my son when he had chicken pox.

Love the Vicks VapoRub. Instead of putting on chests and under noses, try putting it on the bottom of your feet! Yep, the bottom of your feet works best when you have a cough that is bothersome. Be sure to do this before going to bed and put on a lightweight pair of cotton socks. By morning you'll feel better. Added benefit, the vicks softens your feet.

I love home remedies, my favorite would be making home made facial masks. I love mixing Honey, apple and sage as facial mask. This is good for oily face skin