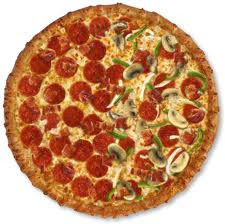 It seems like there are infinite combinations when it comes to pizza.  I'm not talking about what you have on the pizza, but with you have WITH it.

Take my friend Jean for instance.  Her husband is a chef.  When they have pizza it's an ordeal.  First of all, her hubby MAKES the pizza from scratch.  But before he does that, he first gets out his big soup pot.  Yup, pizza night for them means homemade chicken soup comes first.

When I was growing up, pizzas were few and far between.  The only place around us that made pizza was a little hole in the wall called Chicken Delight.  (And as you might guess, the pizza wasn't very good--but what did we know--we hadn't had much to compare with--except for that rubber monstrosity they made at school with was 90% uncooked dough, 8% bad sauce, and 2% rubber cheese.) 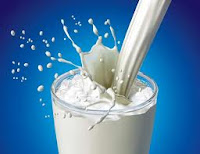 As a kid there were three things to drink in the house:  pop, Kool-Aide or milk.  I got used to drinking milk with my pizza and still do to this day.  A nice, Tall, FROSTY glass of (skim) milk.

Mr. L says it makes him want to puke.

He, on the other hand, either has a beer or a glass of scotch (unless we're reheating it at lunchtime and then he drinks--ick--Gatorade).

What do YOU like with your pizza?
Posted by Unknown at 6:25 AM

In my house we usually have a big salad with our pizza - it makes me feel like I am being healthier - although I realize it is NOT!
Funny about the milk Lorna - to this day I still drink milk with a lot of our meals - including spaghetti(it is a must) - and it pretty much sickens my husband too! :)

Pizza is our weekend treat so we go whole hog and order two large Margarita pizzas from our favorite local Italian restaurant and pull out the special and rare made-with-sugar-Coke.

Aimee, my Mom says she can't eat pizza without Coke, too. But she doesn't have the made-with-sugar kind. I gave up all sweet pop (soda for you guys not from Western NY) years ago. High Fructose Corn Syrup is a big turn off for me. I avoid it like the plague.

We generally go out all unhealthy when we have pizza (which is only once per month). We order hot wings, soda and the occasional sweet treat.

When we have Pizza night we go all out as well we have 3 different kinds of pizza as we all have different taste, wings, bread or cheese sticks and soda. I have to have either pepsi or dr pepper with mine. The boys drink milk.

I like a nice glass of wine with my pizza.

I hate to admit this... water. I did 8 months on the Adkins diet once (64 oz. of water a day) and got used to drinking water with everything.

Except warm, right from the oven, chocolate chip cookies. Those require milk.

I like to have buffalo wings (the ones in Buffalo are to die for) with my pizza and juice.

I use to drink milk with my pizza until I added the buffalo wings. I couldn't understand why I had gastro problems until I realized that milk and hot sauce do not go together.

I usually have a big salad with my pizza but the drink always has to be Coke.

@Dru...You got me thinking about wings. Hmmmm...lunch is how many hours away? :-)

Oh the days!!! I remember when pizza was a social thing - it was not delivery or pick up. Oh well ... I guess there are still places where you can actually go out to and eat pizza. And I remember trying different things on my salads at the buffer. This was a big difference from the salads at home with the limited veggies in the salad like lettuce, tomatoes, and maybe some onion.

My husband absolutely has to have dill pickles with his pizza, and not kosher - only Heinz regular dill pickles.

Pepsi has always been my drink of choice with pizza, but since we've moved to AZ I've learned to like beer (at almost 60!) so now that would be my choice.

When I was still drinking sodas, it was Coke (with sugar). Now it's either a very cold beer or water....

Sugar Coke aka Mexican Coke can be found in *gasp* glass bottle cases at many Costcos. It used to only be available in SoCal but Costco saw the demand and started shipping it out to other areas.

If you live in an area with a large Jewish population you can get US made sugar Coke right before Passover too.

I only allow myself one soda a week so I like to splurge on the good stuff. ; )

Homemade soda i.e. seltzer water with a little lemonade and/or slice of lemon and lime. I make my own pizza too. If you have a mixer with a dough hook, it is really easy,especially if you do some of it ahead. I make my own sauce too in the microwave with crushed tomatoes,garlic ,s&p,a little raw sugar, evoo&bay leaf. I read a cozy mystery about a woman who owns a pizza shop and I use her dough recipe now.
Just got my laptop back from the shop and this is the first site I visited.

We usually have a big green salad with our pizza. And we drink soda with it. For me, a Coke goes perfectly with pizza.

A crisp green salad with Bleu Cheese dressing and a frosty glass of white wine! Yummy.

mmmm piiiizzzzaaaa... my FAVORITE food! I love to eat a big salad with it (has to have some vegies but especially tomatoes and red onions!) and prefer a Valdiguié, Côtes du Rhône, Chianti or a nice local microbrew style beer depending on pizza ingredients... no matter if I am drinking iced tea (never sugar) or soda or whatever I still drink water with everything!

it depends on my mood. most days its just pizza, nothing else. other days pizza, salad, and breadsticks. beverages go from lemonade to soda to milk or water...occasionally alcohol of some kind if its in the house.

Oh boy. Pizza is a very common thing in our household, I'm afraid. My hubby and I always argue about toppings. I have to have either onions or banana peppers on my pizza. He can't stand either topping. So, we usually have to go half and half. He hates having onion or peppers on any part of the pizza because he claims that he can still taste it on the pizza. I say he's full of it. He, on the other hand, loves Hawaiian pizza. I say ick! Pineapple and ham do not belong on a pizza!! As far as what we drink with pizza, I prefer sugar free koolaid. Preferably cranberry/apple flavor. I think the hubby prefers beer. We have promised ourselves that we won't order pizza as often as we have been, but that's definitely going to take some strong will power.

Caffeine Free Diet Pepsi in a frosted glass from the freezer. We keep them in the freezer for DH's beer, but I use them for my sodas and when I have milk at a meal.

Ruralview: I love love love Heinz Regular dill pickles!! They are amazingly difficult to find except at an Air Force base commissary. When I find them, I buy several jars.

Here in pizzaland, you don't order the toppings separately. There are standard combinations and you take what's offered. The favorite here is the Margherita, created by the first pizza chef in Naples in honor of the Italian flag--RED tomatoes, GREEN basil, and WHITE mozzarella. It was prepared for and named for the then queen.

We buy the Chef Boyardee Pizza kits. And LOVE them! If we do get a pizza to order or sit down, we go to a local resturant called Davanni's. I am not sure if it is chain outside of Minnesota or not. But that is who we prefer. :)Sometimes the hubby and I will get garlic cheesy bread and then if the ODS eats well, he gets a brownie. lol

I have to have either Diet Coke, Diet A and W rootbeer, or sometimes milk.